The Sensex and the Nifty50 finished more than one percent lower on Monday as selling pressure in spaces such as financial, FMCG and metal shares worsened in the second half of the day. Globally, investors remained on the back food amid persistent concerns about steep hikes in COVID-era interest rates.

Indian equity benchmarks finished a weak session more than one percent lower on Monday as Dalal Street began a four-session week on account of the Dussehra holiday on Wednesday. Barring healthcare, weakness across sectors pulled the headline indices lower, with financial, FMCG and metal stocks being the biggest drags.

Globally, investors remained on the back foot amid fears that steep hikes in COVID-era interest rates will hamper economic growth.
The Sensex slumped 743.5 points or 1.3 percent to 56,683.4 at the weakest level of the day, and the Nifty50 declined to as low as 16,855.6, down 238.8 points or 1.4 percent from its previous close.
ICICI Bank, Infosys, ITC, Hindustan Unilever and Kotak Mahindra Bank were the biggest drags for both main indices. "Global markets are expected to stay under pressure due to the confluence of an unfavourable economic outlook and investors' aversion to risk... A dip in India's manufacturing PMI suggests demand slowed, triggering selling pressure across most of the key sectors," said Vinod Nair, Head of Research at Geojit Financial Services.
The Nifty Auto — which tracks stocks of 15 manufacturers of automobiles and their parts, including Maruti Suzuki, Tata Motors, Mahindra & Mahindra, Hero MotoCorp and Bajaj Auto — finished 0.7 percent higher, as auto makers reported their monthly sales numbers.
The rupee ended weaker at 81.87 against the US dollar. 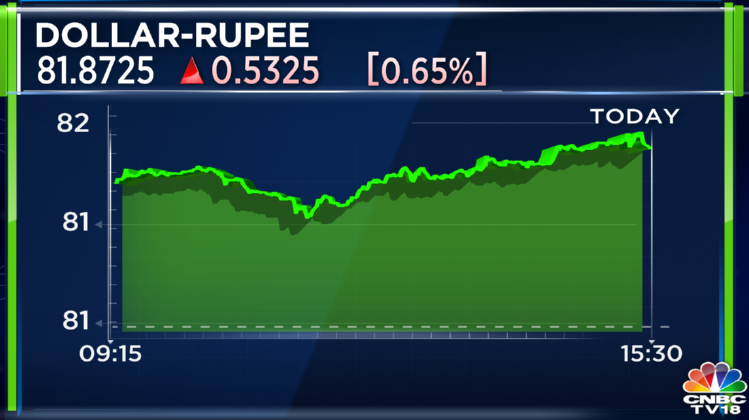 Overall market breadth shifted in favour of the bears from the bulls in the second half of the day, as 1,453 stocks rose and 2,096 fell on BSE at the close.

The India VIX — known in market parlance as the fear index — rose seven percent to 21.4, its biggest spike since September 23.
Global markets
European markets began the day deep in the red amid weakness in tech and financial shares, following mixed moves across Asia where the China market remained shut for a holiday. The pan-European Stoxx 600 index fell as much as 1.6 percent in early hours.
S&P 500 futures edged up 0.2 percent, suggesting a positive opening ahead on Wall Street.
Catch highlights of the October 3 session with CNBCTV18.com's blog
Check out our in-depth Market Coverage, Business News & get real-time Stock Market Updates on CNBC-TV18. Also, Watch our channels CNBC-TV18, CNBC Awaaz and CNBC Bajar Live on-the-go!