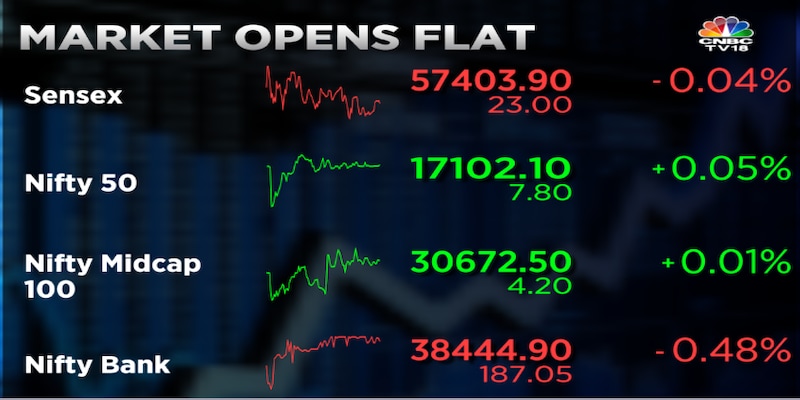 The Sensex and the Nifty50 fell as much as 0.5 percent in the first few minutes of trade amid selling pressure in financial, IT, auto and FMCG shares. Globally, the mood remained cautious amid concerns about steep hikes in pandemic-era interest rates.

Indian equity benchmarks began a holiday-truncated week weaker on Monday amid selling pressure in financial and IT shares, after sharp gains in the previous session following the RBI's 50-bps hike in the repo rate, which met Street expectations. Globally, investors remained in a cautious mood amid persistent worries about the impact of aggressive hikes in COVID-era rates on economic growth.

Both headline indices declined as much as half a percent in the first few minutes of trade. The Sensex dropped 288.8 points to 57,138.1 during the session so far, and the Nifty50 slid to as low as 17,015, down 79.4 points from its previous close.
A total of 19 stocks in the Nifty50 basket opened in negative territory. The HDFC twins, Kotak Mahindra Bank, IndusInd, SBI, Dr Reddy's, Adani Enterprises and HDFC were the top laggards, declining between 0.4 percent and 0.8 percent.
On the other hand, ONGC, Eicher, Maruti Suzuki, Hindustan Unilever, Titan, Reliance and Bharat Petroleum were the top gainers, rising between 0.5 percent and 3.9 percent.
ICICI Bank, Infosys, HDFC Bank, Kotak Mahindra Bank and TCS were the biggest drags on both main indices. "Even though there are global challenges for equity markets, India's outperformance is likely to continue. A significant trend in the market now is the dominance of DIIs and retail investors over FIIs... If this kind of dominance can be sustained, FIIs will have to slow down their selling even in the context of the rising dollar and US bond yields," said VK Vijayakumar, Chief Investment Strategist at Geojit Financial Services.
"A re-entry for FIIs will be expensive since DIIs and retail investors will not easily sell back the stocks that FIIs had sold," he said.
Auto stocks were in demand after most manufacturers reported a rise in their monthly sales. The Nifty Auto — which tracks stocks of 15 auto and auto part makers including Maruti Suzuki, Tata Motors, Mahindra & Mahindra, Hero MotoCorp and Bajaj Auto — gained as much as 0.7 percent.
"Auto numbers for September confirm the strong rebound trend. There is more room for commercial vehicles, passenger vehicles and select two-wheeler stocks to move higher," Vijayakumar added.
The rupee started the day weaker at 81.62 against the US dollar. 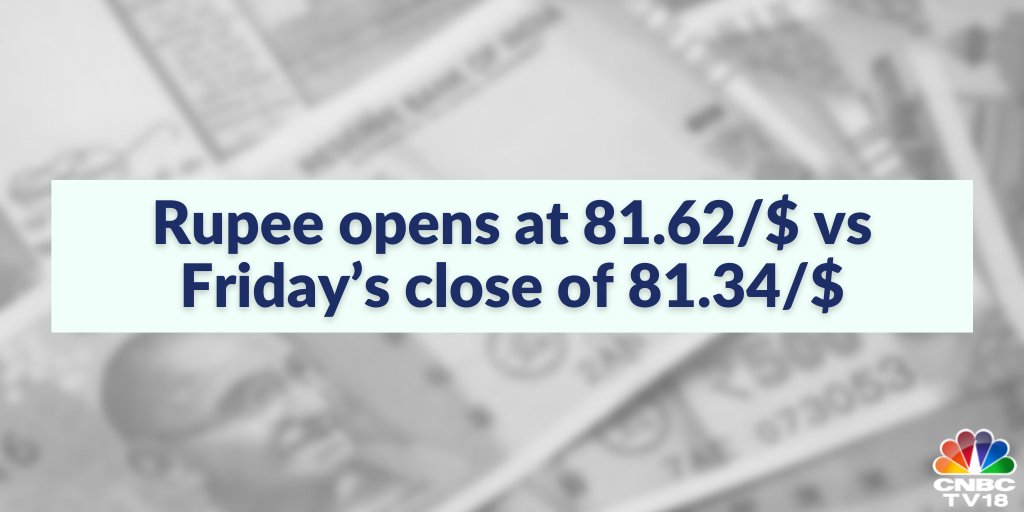 Overall market breadth was skewed in favour of the bulls, as 1,320 stocks rose and 1,079 fell on BSE.

The India VIX — known in market parlance as the fear index — leaped as much as  7.4 percent to 21.44 in early deals.
The Indian market will remain shut on October 5 for Dussehra.
Global markets
Equities in other parts of Asia were a mixed bag, with MSCI's broadest index of Asia Pacific shares outside Japan trading 0.3 percent lower at the last count.
Japan's Nikkei 225 was up 0.6 percent and Hong Kong's Hang Seng down 0.5 percent. The China market was shut for a holiday.
S&P 500 futures were down 0.1 percent. On Friday, the S&P 500 and the Nasdaq Composite finished 1.5 percent each, and the Dow Jones slumped 1.7 percent amid rising bond yields as well as the greenback.
Catch latest market updates with CNBCTV18.com's blog
Check out our in-depth Market Coverage, Business News & get real-time Stock Market Updates on CNBC-TV18. Also, Watch our channels CNBC-TV18, CNBC Awaaz and CNBC Bajar Live on-the-go!