The Sensex and the Nifty50 hit fresh two-month closing lows on Wednesday as the market continued to fall for the sixth session in a row. Investors awaited the outcome of a key RBI meeting this week for domestic cues.

Indian equity benchmarks slumped to fresh two-month closing lows on Wednesday as the bears continued to rule Dalal Street for the sixth back-to-back session. Weakness across global markets amid persistent worries about aggressive hikes in COVID-era interest rates and their impact on economic growth continued to hurt investors' appetite for risk.

Investors awaited the outcome of a key meeting of the RBI's rate-setting panel due on Friday for domestic cues.
Both headline indices fell as much as 1.1 percent during the session. The Sensex shed 621.9 points to hit 56,485.7 at the weakest level of the day before settling at 56,598.3 — taking its losses to 3,121.5 points in six days. The Nifty50 dropped to as low as 16,820.4 in intraday trade, down 187 points from its previous close.
Investors lost Rs 15 lakh crore in wealth as the market capitalisation of BSE-listed companies came down to Rs 268.4 lakh crore in the six-day period, according to provisional exchange data.
A total of 38 stocks in the Nifty50 basket ended in the red. Hindalco, JSW Steel, ITC, Axis Bank and Reliance were the top laggards. 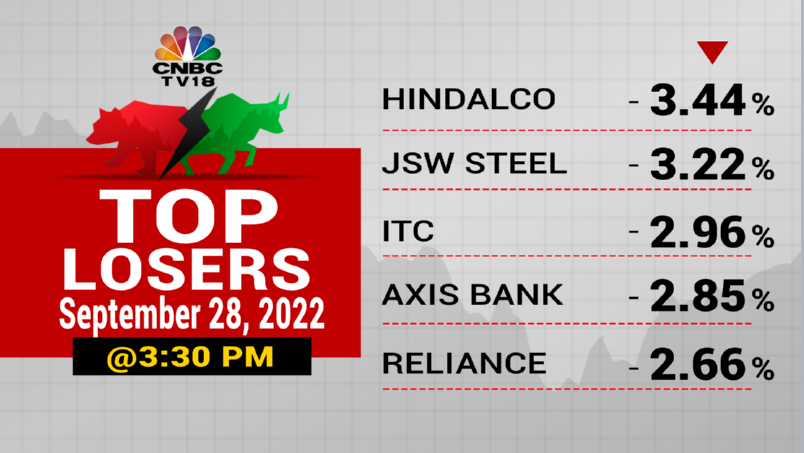 Tata Steel, UPL, SBI, IndusInd and Adani Ports — finishing up to 2.5 percent lower — were also among the worst-hit blue-chip stocks.
On the other hand, Asian Paints, Sun Phrma, Dr Reddy's, Eicher, PowerGrid, Nestle and Hindustan Unilever — rising between 0.8 percent and 2.8 percent for the day — were among the top gainers.
The HDFC twins, ITC, Reliance and Axis Bank were the biggest drags on both main indices, together account for for nearly 500 points in Sensex's fall.
The Nifty PSU Bank was the worst hit among NSE's sectoral indices, followed by the Nifty Metal and the Nifty Bank.
Source: NSE
The India VIX  rose 2.4 percent to settle at 22.09, its highest close since June 29.
"Investors continue to be skeptical of the domestic market's higher premium amid the ongoing global deceleration while foreign investors are fleeing emerging economies in search of safer havens. Although the domestic economy is buoyed by solid fundamentals, the stock market's appetite for risk has been hindered by the rising worries of a worldwide recession," said Vinod Nair, Head of Research at Geojit Financial Services.
ALSO READ: Biggest blow for Dalal Street in 3 months as FPIs turn to selling
The rupee continued to depreciate against the US dollar. The rupee settled at a record closing low of 81.94 vs dollar on Wednesday. The domestic currency has slumped three percent this month. 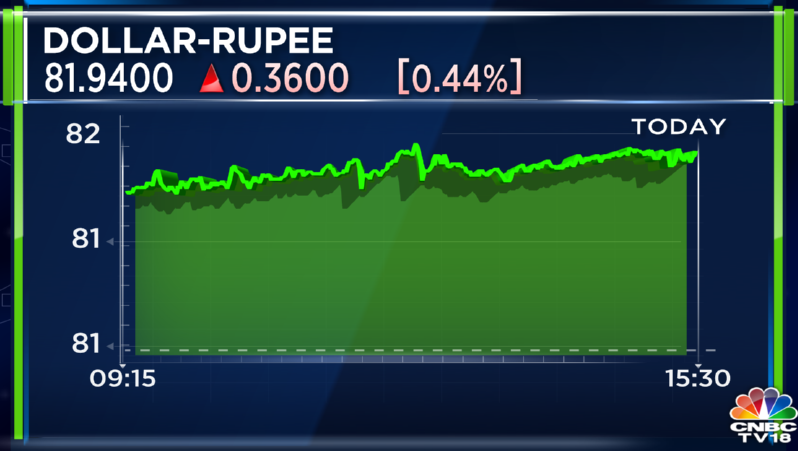 Overall market breadth was in favour of the bears, as 1,277 stocks rose and 2,161 fell on BSE at the close.

Global markets
European markets began the day in the red, mirroring the trend across Asia, amid an intensifying energy crisis in the region. The pan-European Stoxx 600 index was down 1.2 percent at the last count.
S&P 500 futures were down 0.3 percent, suggesting a weak start ahead on Wall Street.
Disclaimer: Network18, the parent company of CNBCTV18.com, is controlled by Independent Media Trust, of which Reliance Industries is the sole beneficiary.
Catch highlights of the Sept 28 session with CNBCTV18.com's blog
Check out our in-depth Market Coverage, Business News & get real-time Stock Market Updates on CNBC-TV18. Also, Watch our channels CNBC-TV18, CNBC Awaaz and CNBC Bajar Live on-the-go!