Insurance is another sector wherein Jefferies has 9 percent weightage to India's life insurance space in its portfolio.

Global brokerage house Jefferies has double weight on India, but given the low weightage, Chris Wood, Global Head of Equity Strategy, said he should be triple overweight on the country.

The research house disclosed its Asia (ex-Japan) long-only thematic equity portfolio in its December report; wherein, it has 46 percent weightage to only Indian companies under various themes. 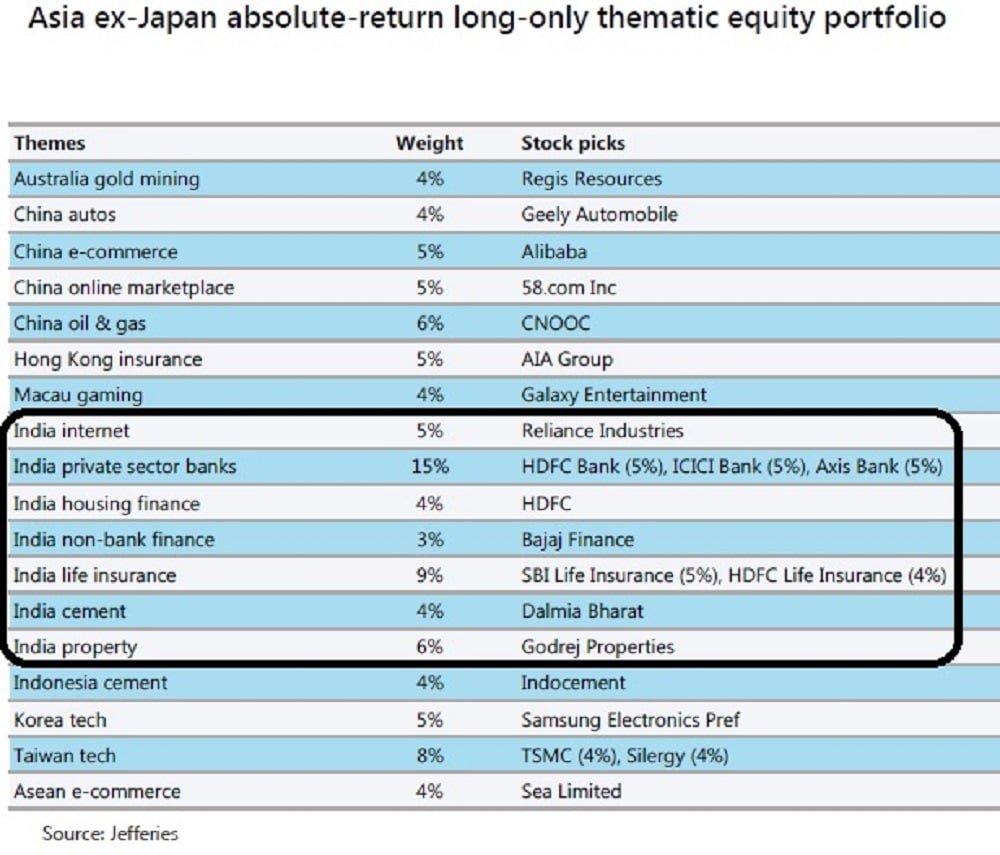 Out of which, it has 31 percent weightage to India's BFSI sector (banking, financial services and insurance) and of that, banking sector's (only private and not public) weightage stood at 15 percent.
It has given 5 percent weightage each to HDFC Bank, ICICI Bank and Axis Bank, India's three largest private-sector lenders.
"In Jefferies long term portfolio (ex-Asia Japan), the constant area of exposure has been Indian private sector banks. The private sector bank index performed well," Christopher Wood, Global Head of Equity Strategy at global investment banking firm Jefferies Group said in an interview to CNBC-TV18.
The Nifty Private Bank index shot up nearly 15 percent so far in 2019, outperforming benchmark Nifty50 index that gained 11 percent in the same period, thanks to easing NPA concerns and structural reforms announced by the government. 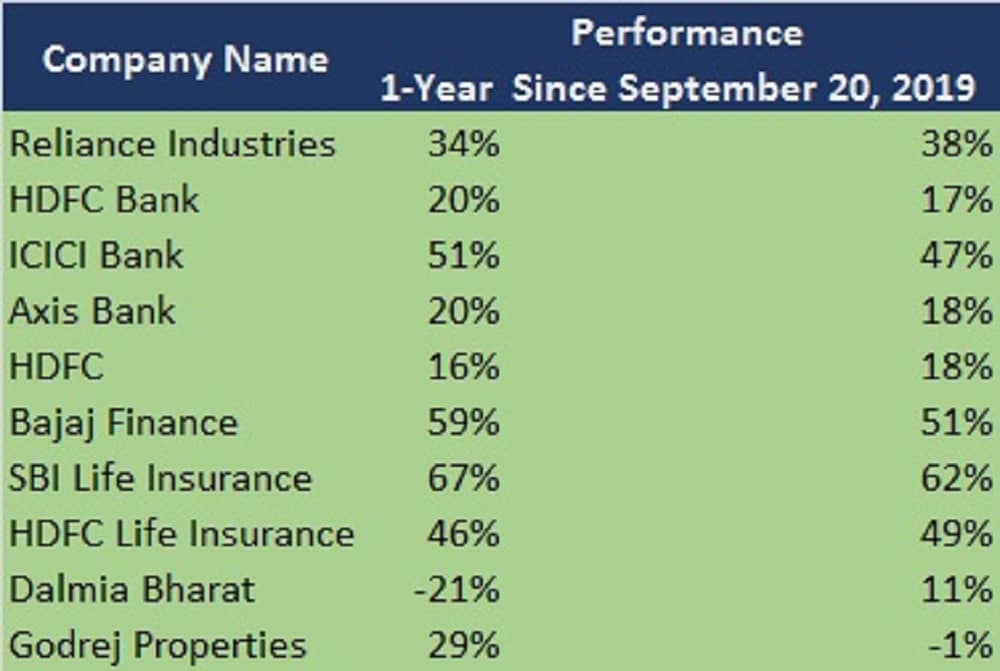 HDFC Bank and Axis Bank gained 20 percent each in last one year while ICICI Bank led the charge with 51 percent gains.
Majority of brokerages remained bullish especially on ICICI Bank even after recent rally as they will expect double-digit returns in the next one year. In fact, many brokerages expect the stock to cross Rs 600 levels in coming quarters.
"With asset quality issues getting sorted, ICICI Bank appears firmly positioned to deliver healthy sustainable growth, led by continued investments in technology and further expansion in digital offerings. We thus estimate RoA/RoE of 1.6 percent/15.7 percent in FY21. Reiterate Buy with a revised SOTP-based target price of Rs 625," Motilal Oswal said. 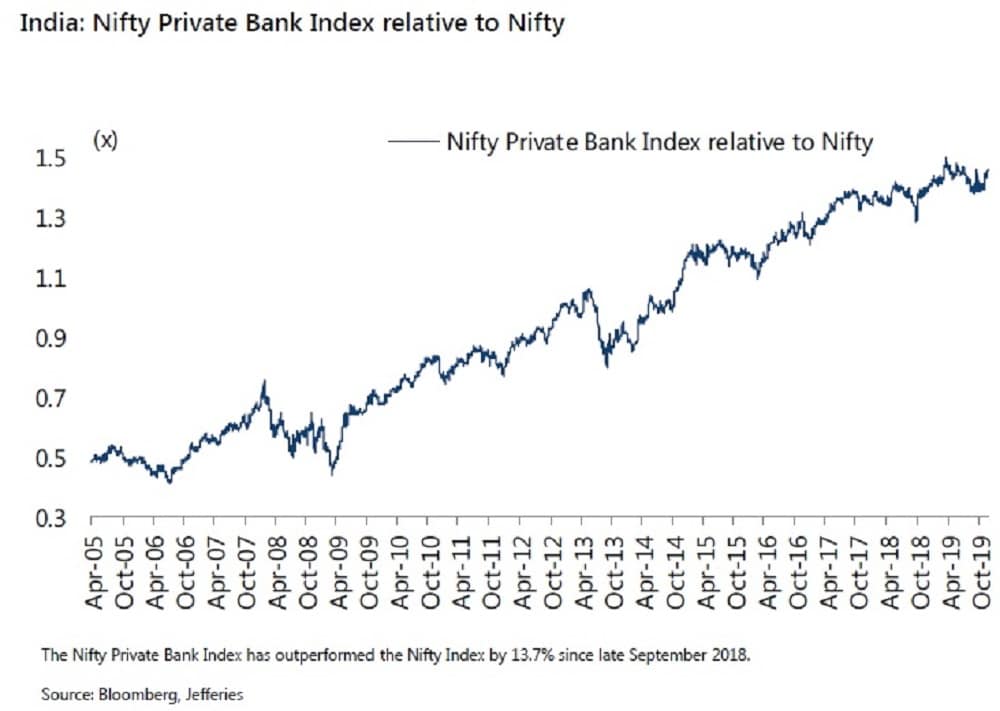 Jefferies has also given 5 percent weightage to Reliance Industries, which comes under India Internet theme, in its thematic equity portfolio.
The stock rallied 34 percent in the last one year and became the most valued company in India by crossing Rs 10 lakh crore in market cap, thanks to its consistent focus on consumer businesses including Reliance Jio where it recently raised tariffs and Reliance Retail.
Most brokerages have a buy call on the stock even after recent rally as they still expect double-digit returns in next one year. In fact, global brokerages expect the stock to cross Rs 2,000 mark in next one year.
After tariff hike, CLSA increased its target price on Reliance Industries to Rs 2,010 (from Rs 1,710 earlier), implying a 30 percent potential upside from current levels following expectations of strong growth in telecom business with the strong subscriber base.
Nomura also raised its target price to Rs 2,020 (from Rs 1,785 earlier) as with the sharp hikes, Jio's average revenue per user (ARPU) is likely to increase over the next several quarters and more tariff hikes look likely.
In housing finance segment, it has 4 percent weightage on country's largest housing finance company HDFC and in non-banking finance space, it has 3 percent weightage on Bajaj Finance, the leading and strong outperformer non-banking finance company due to its strong business model.
Insurance is another sector wherein Jefferies has given 9 percent weightage to India's life insurance space in its portfolio, of which it has 5 percent weight to SBI Life Insurance and 4 percent to HDFC Life Insurance.
Both stocks rallied more than 50 percent in the last nine months, backed by consistent earnings growth.
Insurance has been underpenetrated sector in India compared to developed markets and has much much scope for growth in the years to come, experts said.
Among others, Jefferies has given 4 percent weightage to Dalmia Bharat, which comes under its cement theme and 6 percent weight to Godrej Properties, which falls under property theme.
(Source: Moneycontrol.com)
Disclaimer: Reliance Industries Ltd. is the sole beneficiary of Independent Media Trust which controls Network18 Media & Investments Ltd.
Check out our in-depth Market Coverage, Business News & get real-time Stock Market Updates on CNBC-TV18. Also, Watch our channels CNBC-TV18, CNBC Awaaz and CNBC Bajar Live on-the-go!