The past year has seen the market take unexpected turns. Global events have kept it on its toes while domestic factors struggled to find stability.

Different sectors have shown divergent performance. Some came as a surprise, like the revival of IT stocks which found solace in the weakening rupee and pharmaceutical stocks for a brief while. Some came as a support, like the steady growth of FMCG stocks. Here, we explore how mutual fund exposures have changed in this volatile year and where they have gone against the market. 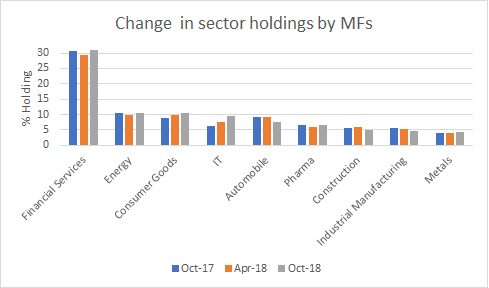 Even as concerns about NPA issues seemed to quieten, the industry had other blows to face. Liquidity crunch in NBFCs shook the market where banks and other financial services companies also had to face the spillover effects. While mutual fund exposure to the sector did see a dip during the year, it came back up to previous levels as prices stabilised and buying continued.

Exposure remained the highest at 30.9% of AUM as of Oct 2018 (latest available data) with banks comprising around 21% and financial services accounting for 9.5%. While financial services appeared to be favoured over banks earlier this year, funds changed course to pick up banking in the later half as troubles engulfed the NBFC sector.

Mutual funds lapped up significant portions in smaller banks like RBL Bank and City Union Bank where their holdings increased by 12 and 8 percentage points from October 2017 respectively. Fund go-to banks ICICI Bank, SBI and HDFC Bank also saw an increase of 1-2 percentage points in their holdings. Among NBFCs, a noteworthy pick is Bharat Financial Inclusion whose MF shareholding increased from 9.6% to 28% between October 2017 and 2018.

Going with the market

Sectors like IT and automobile saw major shifts in exposure. Exposure to IT in equity fund AUM grew from 6.2% to 9.4% while automobiles saw a drop from 9.2% to 7.6%. This comes from the movement of stocks in the respective sectors. IT stocks saw optimism return as the export-oriented sector reaped the benefits of falling rupee. 1-year return of S&P BSE IT index stands at 42% as of Oct 2018.

Likewise, fall in prices of automobile stocks also pulled their exposure down. As a result of muted demand caused by higher fuel prices and higher interest rates, auto stocks took a hit with S&P BSE Auto index losing 20% during the period. However, equity funds seem to have found some small buying opportunities in select stocks like Tata Motors, Motherson Sumi Systems and Cummins India.

Telecom stocks took a beating this year. S&P BSE Telecom lost 40% in one year which decreased its exposure in market-cap weighted BSE 500 index from 2% to 1.32%. But mutual funds, on the other hand, have been buying, resulting in a marginal increase in exposure despite the fall in price. Bharti Airtel’s MF shareholding jumped from 3.4% to 7.4% between October 2017 and October 2018.