The index of state-run lenders has gained nearly 63 percent so far this year, its best annual performance since 2014.

Market valuation of India's state run banks have crossed Rs 10 lakh crore for the first time ever, although more than half of it comes from the leader of the pack and India's largest lender--State Bank of India.

The index of state-run lenders has gained nearly 63 percent so far this year, its best annual performance since 2014, when the Narendra Modi government was elected to power for the first time.
However, the PSU Bank index is still trading around 23 percent lower than its all-time high of 5,375 that it made in 2010.
Also Read: Industry welcomes move to let PSU bank heads have maximum tenure of 10 years
All 12 constituents of the index are trading with gains on a year-to-date basis. Here is a look at how some of them have fared: 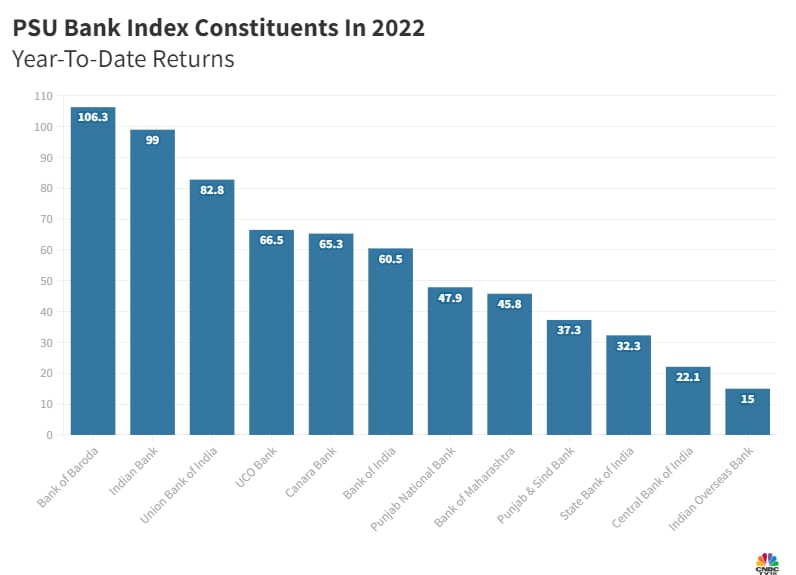 Bank of Baroda: Shares of the state-run lender have doubled this year and are on course for their best annual performance in two decades. Shares had risen 33 percent in 2021 after three consecutive years of negative returns.
Indian Bank: Another state-run lender whose shares have nearly doubled in 2022. This is the stock's best performance since it listed in 2008.
UCO Bank: A stock that once traded above the mark of Rs 100, are now struggling to stay above the Rs 20 mark. However, the 66 percent gains witnessed by the lender's shares this year is the best since 2012. After six consecutive years of negative returns when shares dropped anywhere between 20-50 percent annually, the stock gained 2.5 percent in 2021.
Canara Bank: Shares of this bank in which the late Rakesh Jhunjhunwala also holds a 1.5 percent stake are up nearly 65 percent this year. This is the best share price performance by the bank since 2010.
Also Read: Efforts to bring down NPAs bearing fruits — profits of public sector banks soar to Rs 25,685 crore in Q2, says Finance Minister
Stocks like Bank of India have also gained 60 percent this year, which is its best performance since 2006 while Bank of Maharashtra, which has gained nearly 45 percent this year, is extending its gains of 2021, during which it gained 47 percent. In an interaction with CNBC-TV18 on November 21, Inditrade Capital group chairman Sudip Bandopadhyay said he believes that if one is an aggressive investor, he would recommend them to buy Punjab National Bank.
"Yes, there has been challenges with this bank continuously over the last few years, last quarter (Q2) was also nothing great, but it will turn the tide and whether it's Q3 or Q4, it will come back with a decent set of numbers, which probably will beat all of our expectations. So if an aggressive investor is still willing to put money in the banking space then PNB is what I will recommend,” he said.
Rahul Chadha of Mirae Asset Global Investment on November 22 told CNBC-TV18 that he likes lenders like SBI and Bank of Baroda within the PSU banking space. Chadha's sentiments were echoed by Sandeep Bhatia of Macquarie, who also picked the same two stocks, but added that it is tough to take a long-term call on PSU banks.
Also Read: Interest rates in India will peak by March, three months ahead of earlier estimate, says Macquarie
Check out our in-depth Market Coverage, Business News & get real-time Stock Market Updates on CNBC-TV18. Also, Watch our channels CNBC-TV18, CNBC Awaaz and CNBC Bajar Live on-the-go!