Pledged shares are those against which promoters in need of capital take loans from banks and NBFCs. Currently, promoters of 827 out of 4,565 companies listed on BSE have pledged shares. The total value of the shares pledged by promoters stands at Rs 2.1 lakh crore. Of this, shares worth Rs 1 lakh crore are pledged by just ten companies.

The maximum valuation of pledged shares is from promoters of Adani Ports, at Rs 22,990 crore. The company, however, has reduced the percent of promoter pledging to 42 percent in March 2019 from 46 percent in December 2018. Adani Ports was followed by TCS, where only 2.9 percent of promotor shares are pledged worth Rs 17,924 crore. 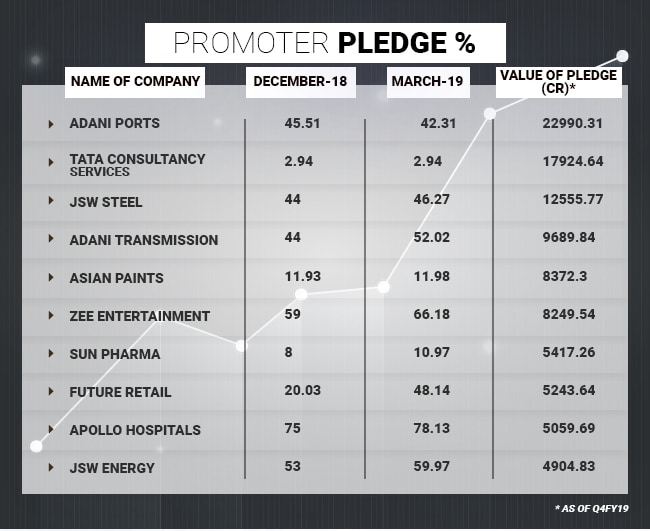 Meanwhile, seven of these 10 are among the companies that also witnessed a maximum increase in promoter pledge on a quarter-on-quarter basis.

READ MORE: The devil in promoters’ pledges is in the details

Among other stocks, Reliance Capital saw maximum increase in pledge with 97 percent of promoter shares being pledged in March 2019 versus 75 percent in December 2018. Emami saw the sharpest decline, from  47 percent in December 2018 to 6 percent. Valuation of shares pledged by Reliance Capital stands at Rs 1.600 crore, while for Emami it is Rs 645 crore.

Reliance Infra, Dish TV, Sadbhav Engineering and Sadbhav Infra are a few other stocks that saw a maximum jump in promoter pledges in the March quarter, while IndusInd Bank, Granules India, Strides Pharma, Jubilant Foodworks and Edelweiss Finance witnessed a decline in promoter pledge during the same period.

Across sectors, industrials have the maximum percentage of pledged shares followed by materials, consumer discretionary, utilities and IT.