Portfolio planning: Here’s how you can allocate Rs 100 to various sectors

Portfolio planning: Here’s how you can allocate Rs 100 to various sectors

The proposals in the Budget is likely to be positive for sectors like Agriculture, infrastructure, renewable energy, finance, aviation, consumption as well as travel and tourism.

The Indian market has rallied by about 4 percent from the Budget Day when Nifty50 closed at 11,661. It may not have been a blockbuster Budget, but it certainly has something for sectors that are related to the economy, consumption and financial services.

The market has seen intermittent corrections so far in 2020 which has given investors enough opportunities to build a portfolio.
If investors are looking to rejig their portfolio, experts feel that this is a good time as the impact of policies introduced by the government and the Reserve Bank of India in the MPC meeting will start showing their impact in the next few quarters.
Budget 2020 came at a time when the Indian economy was besieged by slowdown across various sectors. And the government was struggling to scale up tax revenue collection as intended through GST collection, suggest experts.
“With these challenges, the Budget remained broadly balanced act with long-term intention while tweaking its fiscal target to create more space for capital spending. It favoured certain sectors through capital allocation which had a long term impact to create robust economy at the grassroots level, and build an economic roadmap to accomplish the sheer vision of $5 trillion economy,” Dinesh Rohira - Founder, CEO - 5nance.com told Moneycontrol.
“Therefore, there is also a need to align our investment in combination with the government’s objective through proper diversification across sectors which can generate long-term growth,” he said.
Ideally, investors should avoid rejigging their portfolio frequently but given the fact that certain sectors have been given more preference in the Budget, those sectors will attract smart money.
The proposals in the Budget is likely to be positive for sectors like agriculture, infrastructure, renewable energy, finance, aviation, consumption, and travel & tourism.
“Ideally, one should not be dependent on the Budget only for allocation strategy. Though there would be sectors benefitting out of it. Sector-wise, Budget was pro for railways, infrastructure, consumption, private financials, power distribution, aviation,” Pritam Deuskar, Fund Manager, Bonanza Portfolio Ltd told Moneycontrol.
“It had some optional investment making an effect on insurance cos but it would be back on track in some years as people would realise the importance of insurance even if they save with new tax regime,” he said.
We spoke to experts on how investors can deploy their Rs 100 (investment) into various sectors:
Expert: Dinesh Rohira - Founder, CEO - 5nance.com
Financial Sector (20%): 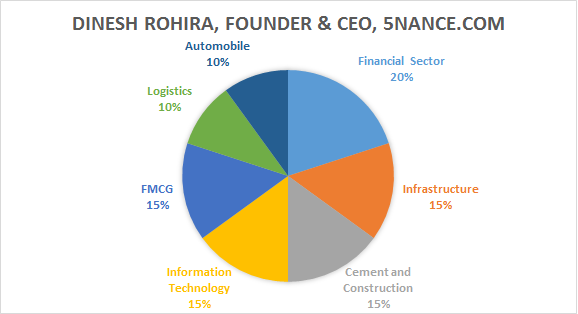 The financial sector will remain the core catalyst for India’s developmental activity with large private banks and select PSU banks playing a critical role in upsurging the credit activity.
Further, the tax exemption for Sovereign Wealth Funds for investments in the infrastructure space along with a single investment clearance window announced during the budget is optimistic.
Further, the lower interest rate regime both globally as well as in domestic context means relaxation in funding cost over a period time with improved margins at the operating level.
Infrastructure (15%): The government continued its thrust to reshape India's infrastructure setup with the National Infrastructure pipeline worth Rs. 103 lakhs crore involving 6500 projects already.
It also allocated Rs. 1.7 lakhs crore for transportation infrastructure along with 100 more airports to be developed by 2024. This initiative among others is likely to benefit infrastructure which are largely focused on big project execution.
Cement and Construction (15%):
Apart from the infrastructure activity, the extension for additional deduction under income tax for interest paid on loan taken under affordable housing scheme coupled with an overall increase in PMAY allocation by 8.6 percent in the Budget is likely to benefit ancillary segment like cement.
With housing and real estate accounting for 65 percent of overall cement consumption in India, it is expected to create demand. Further, the proposed 15,500 km of highway and 9,000 km of economic corridor set up coupled with Rs. 1.7 lakhs crore for transportation infrastructure is positive for road construction firms.
Information Technology (15%):
The scrappage of dividend distribution tax is positive for IT companies which will increase their cash position going ahead. There was also an allocation of Rs. 8,000 crores for a National Mission on Quantum Computing and Technology and internet connectivity to 100,000+ Gram Panchayats which is also positive for the IT firms.
FMCG (15%):
The government focus on improving the livelihood of the rural population through various incentives and developmental activities coupled with higher disposable income with millennials is expected to boost consumption.
Among others, it also proposed to set up Kisan Rail through the PPP model to transport perishable goods quickly. The government also sets up an agriculture credit target at Rs. 15 lakhs crore for FY21 and hiked fish production target of 200 lakhs tonnes by 2022-2023.
Logistic (10%):
The Budget proposed positive updates for the logistics and transport sector with a fund allocation of Rs. 1.7 lakhs crore for transport infrastructure and investment in warehousing and logistics.
This is expected to help boost the growth across vertical and improve last-mile delivery. It also announced the National Logistics Policy to be released to create a single window e-logistics market. With GST integration and e-way bill coupled with better infrastructure is likely to boost logistics sector in coming times.
Automobile (10%):
The various initiatives to increase rural income coupled with the likelihood of positive spillover due to change income tax regime is likely to be positive for farm equipment, two-wheelers, utility vehicle manufacturing. Further, the increased activity in logistic segment is expected to benefit the commercial vehicle players.
Expert: Gaurav Garg, Head of Research at CapitalVia Global Research Limited- Investment Advisor
In the Budget 2020, the government put a lot of emphasis on infrastructure and banking. Keeping this theme, every portfolio should comprise of aggressive, moderate and defensive stocks so that risk could be optimized with a higher probability of stable returns. 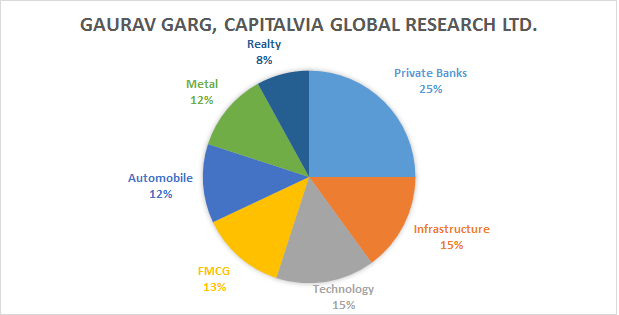 I recommend having private banks, metals, automobiles and the realty sector for aggressive returns. Private banks and HFCs will play an important role in financing the projects both commercial and residential.
Metal and realty will be direct beneficiaries of the government’s increased spending in the infra segment.  In the auto space, the scrappage policy announcement is expected soon and can prove to be a turnaround moment for the automobile sector.
Infrastructure should be part of the portfolio for moderate returns as the government is planning Rs. 1 Trillion investment over 5 years.  Technology and FMCG will be good picks in the defensive category and would also provide good diversification to the portfolio.
(Source: Moneycontrol.com)
Check out our in-depth Market Coverage, Business News & get real-time Stock Market Updates on CNBC-TV18. Also, Watch our channels CNBC-TV18, CNBC Awaaz and CNBC Bajar Live on-the-go!