Pidilite share price: The stock of Pidilite Industries — whose brands include Fevicol, FeviKwik and M-seal — rose on Thursday following a day's breather. The company staged an all-round strong financial performance boosted by strong growth in volumes.

TRADE
Pidilite Industries shares continued to rise on Thursday following a day's pause, as the consumer and industrial specialty chemicals maker staged a strong all-round quarterly performance. Pidilite — whose brands include Fevicol, FeviKwik, Dr Fixit and M-seal — wooed the Street with growth in volume that exceeded Street estimates by a wide margin.
Before slipping on Wednesday, the Pidilite stock had risen as much as 14.3 percent in an upmove that lasted nine back-to-back sessions.
The healthy set of quarterly numbers by the Fevicol maker comes at a time when businesses across sectors are struggling to protect their margins due to elevated material costs.
Pidilite Industries' net profit for the April-June period jumped 64.3 percent on a year-on-year basis to Rs 357.5 crore, according to a regulatory filing. Its revenue expanded 60.1 percent to Rs 3,101 crore, aided by stable domestic demand in housing and home improvement segments, and a good monsoon season.

Analysts in a CNBC-TV18 poll had estimated its quarterly profit at Rs 305 crore and revenue at Rs 2,850 crore.
Its volumes expanded both in volume as well as value terms, surprising analysts in terms of profitability as well as margin. Its volume saw an increase of 49 percent on year, as against the estimate of 30-35 percent by analysts in a CNBC-TV18 poll.
Pidilite's management said that despite high input costs, the company managed to keep its margin constant sequentially on account of calibrated pricing, increased sales and effective cost control measures.
Pidilite Industries Managing Director Bharat Puri told CNBC-TV18 that the company is facing continuous margin pressure.
“Our belief is that major raw materials are showing signs of easing. They won't come back to the original levels, but given that we have taken pricing at about 75 percent levels, frankly, if raw material prices start to ease in the second half, we will be far more comfortable from a margins perspective,” he said.
Puri also said the company's e-commerce monthly sales have reached full-year pre-COVID sales. "We have got a fair amount of momentum on the whole digital agenda," he added. Analysts are positive on the company's business prospects going forward.
"Recent softening in the input prices with reduction in the crude oil prices, and good demand conditions in the housing and home improvement segment will drive growth for Pidilite in the medium term," Kaustubh Pawaskar, AVP-Research at Sharekhan by BNP Paribas, told CNBCTV18.com. 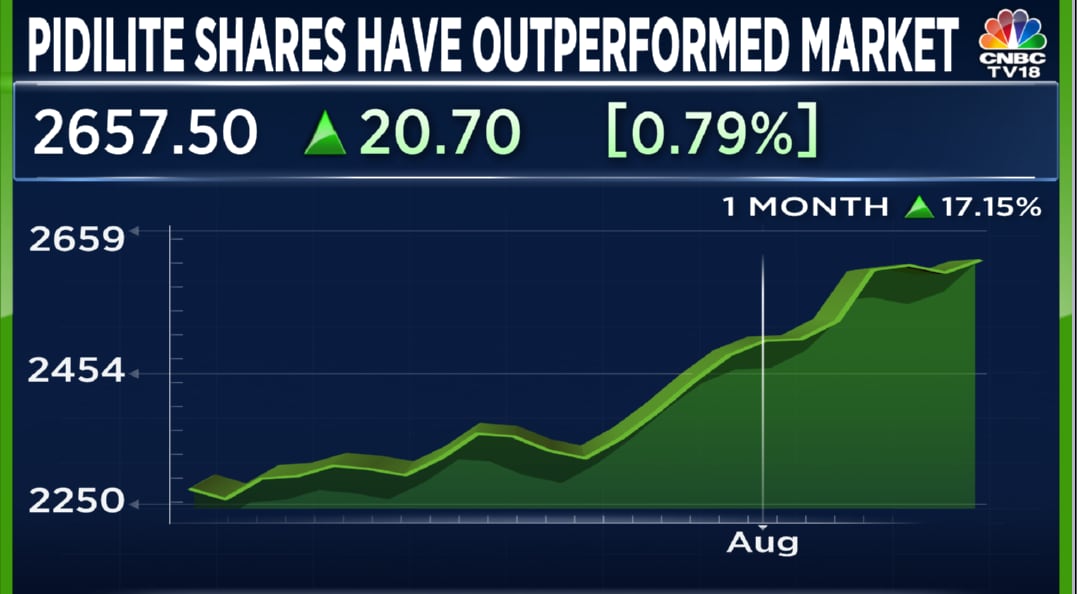 Pidilite shares have rewarded investors with a return of 17.2 percent in the past one month, a period in which the Nifty50 benchmark has risen 8.9 percent.
Catch latest market updates with CNBCTV18.com's blog
(Edited by : Sandeep Singh)
Check out our in-depth Market Coverage, Business News & get real-time Stock Market Updates on CNBC-TV18. Also, Watch our channels CNBC-TV18, CNBC Awaaz and CNBC Bajar Live on-the-go!
Tags