Banking stocks poised to take Nifty50 to a fresh record soon. Here's why

Banking stocks poised to take Nifty50 to a fresh record soon. Here's why 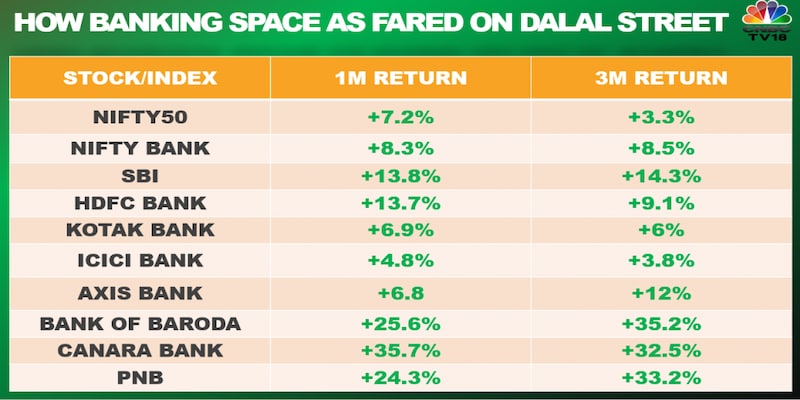 The Nifty50 has once again close to its record high, scaled in October 2021 driven by the all-powerful banking basket, and analysts are betting big on a few stocks to make most of the current momentum.

A rally in banking stocks has helped the Nifty50 touch a series of 52-week highs, and brought the Dalal Street benchmark within inches of its record high. The Nifty Bank — the 12 members of which include India's largest lenders such as SBI, HDFC Bank, Kotak Mahindra Bank, ICICI Bank and Axis Bank — has crossed its October 2021 peak to scale fresh lifetime highs. Experts believe the heavyweight banking basket will continue to power a rally in the market in the near term, riding on the back of sustained earnings and credit growth amid improving asset quality. The Nifty Bank — whose constituents also include PNB, RBL Bank, IndusInd, IDFC First and Bandhan — hit an unprecedented 42,450 on Wednesday.
Almost all of the country's largest banks reported a decent set of financial results for the July-September period, driven by robust loan demand thanks to the festive-related boost and gradually improving asset quality — gauged by the proportion of bad loans in total loans. 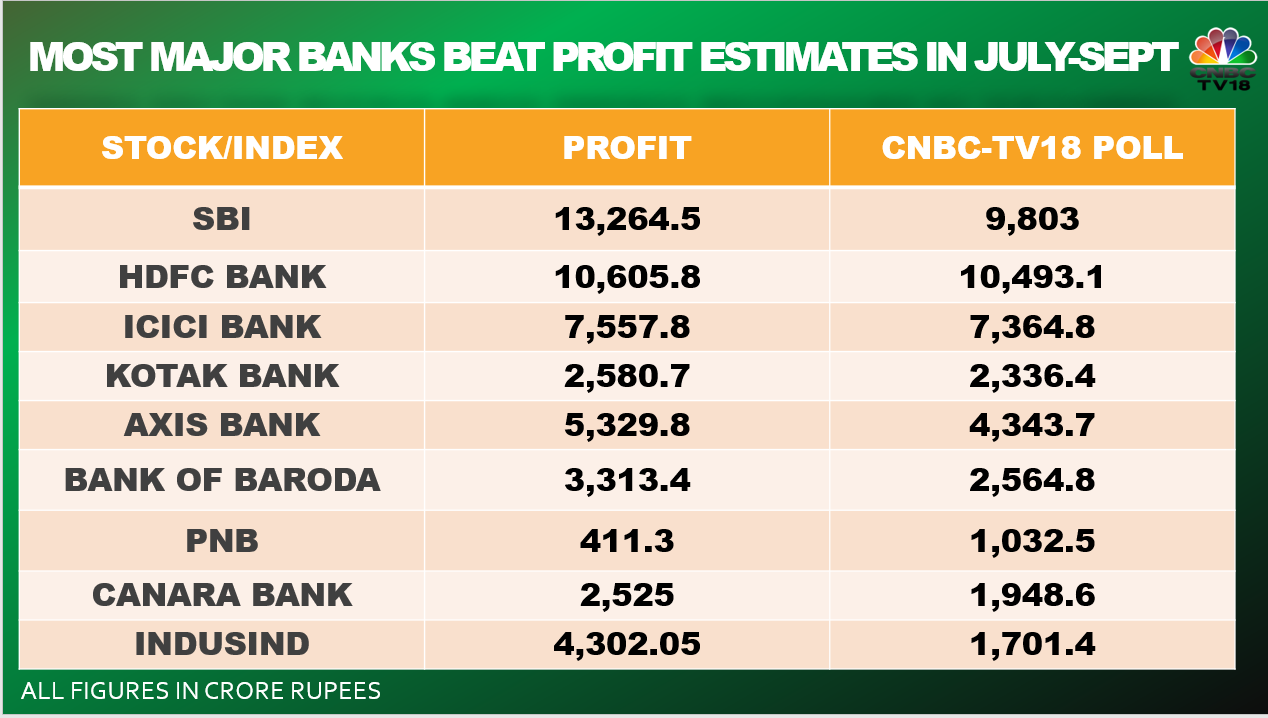 What's propelling the banking boost on Dalal Street?
Although it was a mixed season for the overall market, cyclical businesses such as banking surprised the Street. The aggregate profit of all of the constituents of Nifty50 — where financial services have the maximum weight of 37 percent — came in eight percent above Street estimates.
Analysts say optimism on earnings growth and sustained credit growth is likely to support the overall market in the near term.
"The banking sector is coming out of a prolonged phase of weakness, which was due to tepid loan growth coupled with a multi-year loan write-off cycle, but the situation on the ground has now turned around for the better. After many years, we are now back to 15+ percent credit growth for the sector," said Sameer Kaul, Managing Director and CEO at TrustPlutus Wealth.
Kaul expects strong profit growth in the sector over the three years ending March 2025 banking on a decent pickup in corporate loans and a sharp decline in loan loss provisions. "This explains the buoyancy in the sector for the past few months," he told CNBCTV18.com.
Technical view
Analysts believe the banking index is yet to confirm a firm base before the next leg of upmove.
"The banking index is struggling to stage a price-intense move, and only a sustained move above 42,200-42,000 levels will be key for any further upside," said Viraj Vyas, Technical and Derivatives Analyst at Ashika Group.
Stock picks
Sharad Avasthi, Head-PCG Research at SMIFS, likes two stocks from the banking index: ICICI Bank and and SBI.
ICICI Bank is a decent stock to hold though there is not much scope of a rerating, he told CNBC-TV18.
"Given the numbers, I think the book value for the year ended March 2024 should be somewhere around Rs 330-340," said Avasthi, who considers Rs 1,020 as the fair value for the stock. He suggested holding on to SBI shares for a potential target of Rs 700.
Vyas likes two stocks from the pack: HDFC Bank, which has given a breakout on the line chart coupled with strong outperformance to the index, and Kotak Bank, which has staged strong momentum following 10-odd months of consolidation.
Catch latest market updates with CNBCTV18.com's blog
Check out our in-depth Market Coverage, Business News & get real-time Stock Market Updates on CNBC-TV18. Also, Watch our channels CNBC-TV18, CNBC Awaaz and CNBC Bajar Live on-the-go!