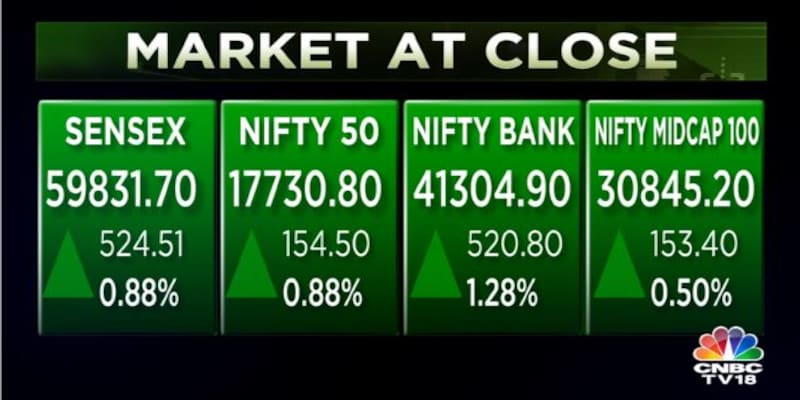 The Sensex and the Nifty50 held on to much of their intraday gains after rising more than one percent in a special one-hour Muhurat trading session to mark the occasion of Diwali.

Indian equity benchmarks finished a special Muhurat trading session at one-month closing highs on Monday, October 24 to mark the occasion of Diwali 2022. Gains across most sectors pushed the headline indices higher, with financial, IT, auto and metal shares being the biggest contributors.

The Sensex jumped 687.1 points or 1.2 percent to touch 59,994.3 at the strongest level of the session before settling at 59,831.7. The Nifty climbed to as high as 17,777.6, up 201.3 points or 1.1 percent from its previous close.
Investors grew richer by Rs 2.1 lakh crore as the market capitalisation of BSE-listed companies increased to Rs 276.5 lakh crore, from Rs 274.4 lakh crore on Friday, according to provisional exchange data.
Nearly all of the Nifty50's constituents finished the Muhurat trading day higher. ICICI Bank, Nestle, SBI, Larsen & Toubro, the HDFC twins, UPL, Grasim, Tata Consumer and JSW Steel — ending with gains of between 1.4 percent and 2.9 percent — were the top gainers. ICICI Bank, HDFC, HDFC Bank, Infosys and L&T were the biggest boosts for both main indices. 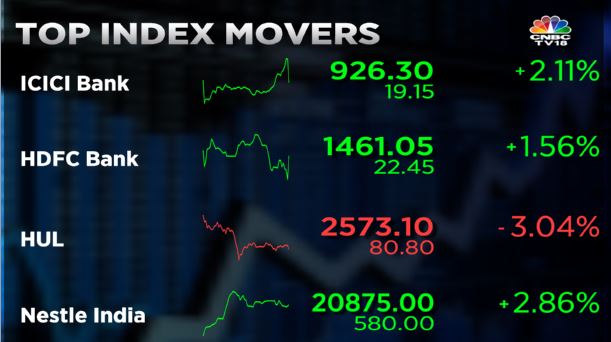 Hindustan Unilever (down three percent), Kotak Mahindra Bank (down 0.2 percent) and HDFC Life (down 0.1 percent) were the only laggards in the 50-scrip pack.
Barring the Nifty FMCG, which edged 0.1 percent lower, all of the sectoral indices on NSE finished the day in the green. Market veteran Ramesh Damani believes the market will scale new peaks over the next few quarters. "For retail investors, the best time to invest was yesterday and the second best time to invest is today," he told CNBC-TV18.
Overall market breadth was sharply in favour of the bulls, as 2,662 stocks rose and 744 fell on BSE.

Global markets
Wall Street indices were a mixed bag in early hours on Monday, as nascent hopes of slowing rate hikes in the US were dashed by a slide in the tech stocks. The S&P 500 was down 0.1 percent at the last count and the Nasdaq Composite down 1.2 percent, though the Dow Jones was up half a percent.
European shares rose after Rishi Sunak won the race to become the next prime minister of the UK, giving investors a greater sense of confidence in the robustness of Britain's finances. The pan-European Stoxx 600 index rose two percent.
Catch highlights of the Muhurat trading session with CNBCTV18.com's blog
Check out our in-depth Market Coverage, Business News & get real-time Stock Market Updates on CNBC-TV18. Also, Watch our channels CNBC-TV18, CNBC Awaaz and CNBC Bajar Live on-the-go!