Indian markets were trading lower dragged by metals, IT stocks after the economic survey predicted FY20 GDP growth at 5 percent, slowest since the global financial crisis of 2008-09. The BSE Sensex ended 190 points lower at 40,723, while the Nifty50 index fell 74 points to settle at 11,962.

- SBI Moves 2.5 percent Higher After Reporting A Strong Set Of Earnings In Q3

- Except Realty and PSU Bank, All Indices Close With Cuts

Indian markets ended lower on Friday, dragged by metals, IT stocks, after the economic survey predicted FY20 GDP growth at 5 percent, slowest since the global financial crisis of 2008-09. Economic Survey 2020, tabled in the parliament today, projects economic growth at 6-6.5 percent in FY21, but warned it may have to miss its deficit target to revive growth.

The BSE Sensex ended 190 points lower at 40,723, while the Nifty50 index fell 74 points to settle at 11,962 dragged by metal, auto and IT stocks. Index heavyweights RIL, TCS, ICICI Bank, and HCL Tech contributed the most to the losses. Meanwhile, broader markets were mixed for the day. While Nifty Midcap index shed 0.7 percent, Nifty SMallcap was flat.

Kotak Bank, SBI, IndusInd Bank, Bharti AIrtel, and Bajaj Auto were the top gainers on the Nifty index while, Tata Motors, ONGC, PowerGrid, UPL, and IOC led the losses. Sectoral indices were mixed for the day. Nifty Metal fell the most, down 2 percent followed by Nifty IT, down 1 percent, Nifty Pharma and Nifty Auto also lost 1 percent each. Meanwhile, Nifty Bank and Nifty Realty were positive for the day, up 0.5 percent and 1 percent.

Soon after CLSA raised Reliance Industries' (RIL) target price to over Rs 2,000 per share, the global brokerage firm Macquarie has downgraded the stock to 'underperform' saying most of the positives are already priced in. The brokerage added that it could be tactical buyers of RIL around Rs 1,200. The move comes even after the company reported its highest-ever quarterly consolidated net profit at Rs 11,640 crore for Q3, up by 13.5 percent from the year-ago period. In the corresponding quarter last year, the company posted a net profit of Rs 10,251 crore.

As per the brokerage, there are several things about the company to like such as entrepreneurial vision, disruptive bent, execution of large-scale complex projects, delivery on growth, strong positioning to capture future growth from India’s burgeoning digital economy, monetisation optionality, among others. However, the brokerage cautions that its fundamental bear case is nearly 35 percent below the current price and it would assign at least a 30 percent weight to each of the risk factors. READ MORE
Share:

#3QWithCNBCTV18 | Vinati Organics reports a net profit of Rs 66.8 cr in Q3, down 39% in comparison with the profit reported in Q3FY19 pic.twitter.com/BXFg1n2Qyp

Wipro CEO Abidali Neemuchwalal steps down, Rishad Premji asks employees to focus on priorities during transition Wipro chief executive officer and managing director Abidali Neemuchwalal has steped down from is current role, Wipro Chairman Rishad Premji in a letter to employees informed on Friday . Premji asked them to stay focused on priorities and "continue driving business as usual" through the transition. Premji also lauded Neemuchwala for driving key acquisitions and scaling the company's digital business globally. In a letter marked to 'Wiproittes', which CNBC TV 18 has seen, Premji, who took over as chairman after Azim Premji stepped down last July, said that over the last four years, "Abid has put in place a robust strategy, helped drive some key acquisitions, built a strong execution mind-set and has scaled our digital business globally," READ MORE
Share:

Indian markets recover to turn mildly positive on Friday led by banking stocks. Index heavyweights Kotak Bank, HDFC Bank, and SBI contribute the most to the gains. Here's how various sectors are performing at this hour: 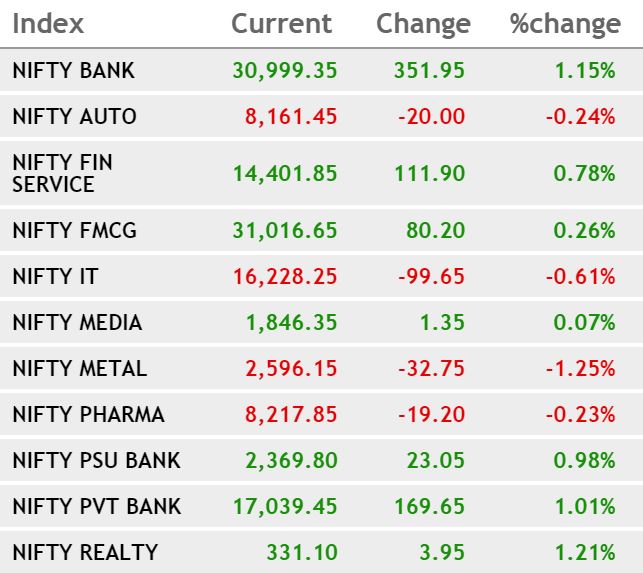 Pronab Sen, former chief statistician on Economic Survey "Talking about fiscal deficit, Sen said, “The point is as far as FY20 is concerned, there will be a breach. The real question is what it is saying about 2021 – that’s more interesting because what you have is 2 statements – one is not mentioning anything about the fiscal deficit but talking about the expansionary fiscal policy. I don’t see how you are going to have an expansion in fiscal policy without some breach of the glide path if not this year’s breach target, but having said that I don’t think that’s the issue. The issue is that is it saying anything about   what the true fiscal deficit is. All it is saying that it is going to breach. If it’s going to breach only because of the giveaways that have happened in the last 3 months or so then it means you are still continuing to hide the problem under the carpet,” said Sen.
Share: India’s economic survey said intervention by the government, though well-intended, often ends up undermining the ability of markets to create wealth and leads to outcomes that are the opposite of the intentions. The survey, which forecasts growth of 6-6.5 percent in the next financial year starting April 1, gave the examples of commodities, drugs, foodgrain and debt waivers to buttress this point. READ MORE

Bharti Airtel says DGFT removed its name from Denied Entry List Telecom major Bharti Airtel said that its name has been removed from Directorate General of Foreign Trade's (DGFT) Denied Entry List. “We wish to clarify that the company has highlighted the relevant details and documents submitted to the DGFT and accordingly the name of the Company has now been removed from the 'Denied Entry List'. We are actively engaged with the authorities to complete the formalities and provide additional documents for the closure of the remaining cases," Bharti Airtel said in a statement on Friday. Earlier on January 28, CNBC-TV18 had reported that the DGFT had blacklisted Sunil Mittal's telecom firm and put the company in the denied entity list. READ MORE
Share:

Economic Survey on Infrastructure - To achieve the GDP of $5 trillion by 2024-25, India needs to spend $1.4 trillion on infrastructure.

- Challenge is to step up the annual infrastructure so that lack of infrastructure does not become a binding constraint in the growth of the economy.

- Since launch, 5,151 projects worth Rs 2 lakh crore at various stages of implementation in 100 cities.

Here are some quick highlights from the economic survey: - Greater home sales can clean up banks' and NBFCs' balance sheets.

Benchmark indices were trading in the red with Nifty around 12,000 and Sensex down around 100 points. Here are the top Nifty gainers and losers at this hour 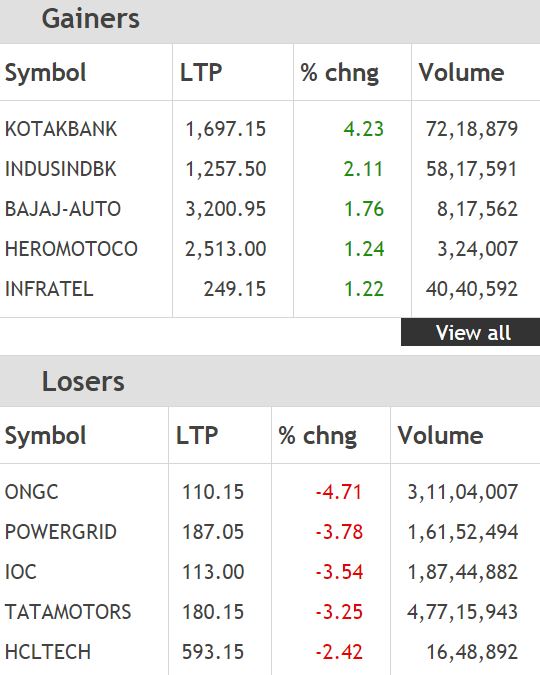 Here are some quick highlights of the economic survey

Here's a quick catchup of live market updates - Benchmark indices pared gains to turn negative with Nifty breaching the 12,000 and Sensex down around 170 points ahead of the economic survey. Investors also await the Union Budget due tomorrow.

- Among sectors, major selling was seen in metal, IT, and auto indices.Nifty Metal lost 1.5 percent, while Nifty IT shed 1 percent in noon deals. Nifty Auto and Nifty Pharma were also down around 0.9 percent in trade. Mwanwhile, Nifty Bank was trading in the green, up 0.25 percent.

- Broader markets were also in the red for third day in a row. Nifty Midcap and Nifty Smallcap indices declined 0.6 percent and 0.1 percent, respectively.
Share:

Cigarette-to-soap conglomerate ITC is set to declare its third-quarter results on Friday. Here are the key expectations:

The revenue is likely to grow at 6.5 percent to Rs 12,000 crore. The EBITDA is likely to see a growth of around 7.5 percent, meaning a slight margin expansion. Analysts are working with a margin expansion of 50 basis points (bps). The net profit, aided by lower taxes, should increase by about 20 percent to Rs 3,850 crore. The key business for the company would be the cigarette segment. Analysts are expecting a revenue growth of anywhere between 5 percent and 6 percent. Watch full preview here

Economic Survey 2020: SBI working with 10% nominal GDP growth for FY21, says Soumya Kanti Ghosh Economic Survey for 2020 to be presented today. All eyes are on the government's growth projections amid the slowdown concerns. The key point is the forecast of 6-6.5 percent real GDP growth for FY21. This is important because based on that we will have an inflation number, we will arrive at the nominal GDP number; a percentage of that is the fiscal deficit. So it’s important to know what will be the GDP forecast.

Soumya Kanti Ghosh, group chief economic advisor at State Bank of India shared his views on the likely outcome of the survey. He said the expectation of 6-6.5 percent FY21 gross domestic product (GDP) growth leads to a nominal growth of around 11 percent. He further said that they were working with around a 10 percent nominal GDP growth for FY21. READ MORE

Share price of Dabur India added 2 percent after it posted in-line numbers for the quarter ended December 2019 (Q3FY20) with consolidated net profit rising 8.9 percent at Rs 400 crore. Credit Suisse has maintained an outperform rating on the stock and has raised target to Rs 540 from Rs 520 per share. Dabur is outperforming its peers in a very tough environment and cut earnings marginally (0.6 percent) on higher-than-expected advertisement spends, it said.

DHFL Case | SC rejects plea by depositors for the repayment, says not inclined to interfere with the IBC process pic.twitter.com/Ibc5IO5JNp

Budget 2020: Stocks to watch out for during FM Nirmala Sitharaman's speech