Indian markets ended higher on Wednesday, snapping 2 sessions of losses on the back of strong Q3 earnings and ahead of Union Budget. The Sensex ended 232 points higher at 41,198, while the Nifty50 index settled 74 points higher at 12,129.

- Market Breadth Turns In Favour Of Advances; Advance-Decline Ratio At 1:1

Indian markets ended higher on Wednesday, snapping 2 sessions of losses on the back of strong Q3 earnings. Investors also remained optimistic ahead of the Union Budget on February 1, where the government is expected to announce measures to revive economic growth that has slipped to a more than six-year low.

The Sensex ended 232 points higher at 41,198, while the Nifty50 index settled 74 points higher at 12,129. Broader markets, however, underperformed the benchmarks for the day with Nifty Midcap up 0.2 percent and Nifty Smallcap down 0.2 percent. Tata Motors, Bajaj Finance, Bharti Infratel, Bajaj Finserv, and Nestle India were the top gainers on the Nifty50 index, while Eicher Motors, Yes Bank, Dr Reddy's, TCS, and HDFC led the losses.

Among sectors, major buying was seen in metal, auto, and FMCG indices. Nifty FMCG rallied 1.3 percent, while Nifty Metal and Nifty Auto were up 0.9 and 0.8 percent, respectively. Nifty Bank also added 0.4 percent and Nifty IT rose 0.3 percent. However, Nifty Pharma was negative for the day. 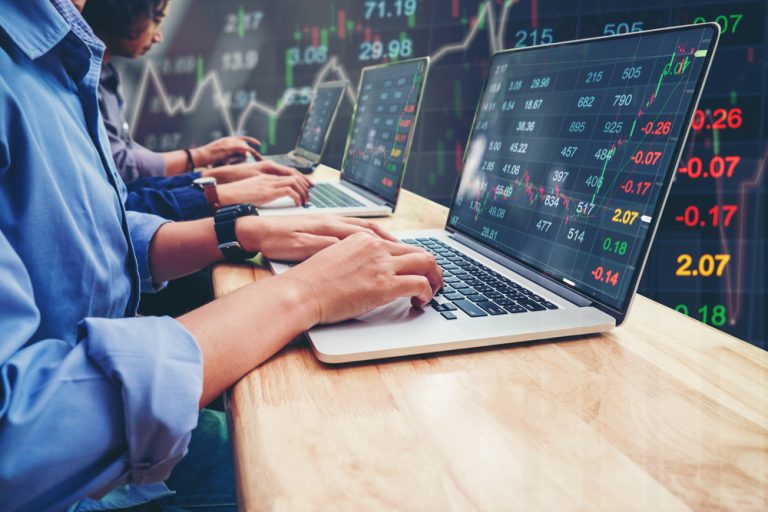 Here's why this Nifty Financial Services stock has risen 25% in a month Financial Services sector was one of the best-performing sectors in the past one year. The Nifty Financial Services index in the past one year has risen about 27 percent amid economic turmoil, demand slowdown, rising inflation, and all other concerns. One midcap stock from this space that has constantly given healthy returns is Can Fin Homes. The stock last year rallied 41 percent, one of the highest among its peers. Meanwhile, on a year-to-date basis, the stock has delivered returns of about 25 percent already on the back of strong Q3FY20 earnings. The company has reported even better returns in the past and has continued to do so. READ MORE
Share:

#3QWithCNBCTV18 | Jubilant Food sees rise on all fronts as it announces its Q3 results; operational margin up nearly 49% YoY pic.twitter.com/OvbSIMYftY

AACL is into manufacturing and marketing of various aliphatic amines, amine derivatives and other specialty chemicals from the last 35 years. So far this year, AACL share price has jumped 23 percent. It has returned over 81.5 percent to investors in the last one year, outperforming the Sensex by more than 65 percent. Not just that, the 10-year gain on the stock is a whopping 3540 percent. The three-year gain too is above 300 percent. READ MORE

#3QWithCNBCTV18 | Mix bag for NIIT Tech in Q3 as co sees rise in profit & revenue of over 3% each while EBIT & margin slip on a sequential basis pic.twitter.com/bgEBVI7byQ

Shares of Bajaj Finance surged 4 percent, to hit a high of Rs 4,383.05, also its fresh lifetime high, on the BSE on Wednesday after the non-banking finance company (NBFC) reported its highest ever quarterly consolidated net profit at Rs 1,614.11 crore in the December quarter of FY20 (Q3FY20), a jump of 52 percent year-on-year (YoY) from a net profit of Rs 1,059.56 crore (Q3FY19). For the quarter under review, the NBFC logged a consolidated net interest income (NII) of Rs 4,537 crore, a rise of 42 per cent, from Rs 3,206 crore reported in the December quarter of the previous fiscal.

Indian Oil Q3 earnings preview: Here's what to expect Q2FY20 for IOC was quite weak impacted by shutdowns, high inventory losses and delayed monsoons that impacted demand for fuel. For this quarter, CNBC TV18 poll expects an improvement in performance on a quarter on quarter (QoQ) basis as inventory gains are likely to be higher due to the crude price movement and company’s inventory cycle. Revenue is expected to be flat at Rs 1.19 lakh crore, as against 1.1 lakh crore QoQ.  Earnings before interest, tax, depreciation and amortization (EBITDA) is likely to shoot up considerably to Rs 6,897 crore, which is a 93 percent jump on a QoQ basis due to inventory gains leading to profit after tax (PAT) expectation of Rs 2,593 crore vs Rs 563 crore QoQ. READ MORE
Share: Prabhudas Lilladher sees an upside of 33% on this stock

Brokerage firm Prabhudas Lilladher initiated coverage on IRCTC (Indian Railway Catering & Tourism Corporation Ltd) with a ‘buy’ rating and a target price of Rs 1,339 per share, an upside of 33 percent.The stock trades 75.6 percent higher from its listing on October 14, 2019. It was listed at Rs 644 on the BSE, a 101.25 percent premium over its issue price of Rs 320 per share. The company enjoys a monopoly position in providing online ticket booking and catering services for passengers traveling by Indian Railways.

Coronavirus has taken the entire world by storm and till now over 130 in China have succumbed to this disease. The rapid spread of coronavirus has also shaken the stock markets around the world. In fact, market participants have been making cautious bets in the equities after the virus began to spread to different countries, claiming lives.

Credit Suisse in its recent research report cited vulnerable sectors that might be affected by the disease. READ MORE HERE

Shares of Rallis India continued their northward march post their Q3 results, rallying 7 percent on Wednesday to Rs 247 on the BSE. The stock has surged 47 percent in January after it delivered robust earnings Q3 on the back of a 35 percent yoy growth in the domestic business, which is the company's best performance in the last six years, albeit on a low base. The company’s profit before tax more-than-doubled at Rs 48 crore in December quarter (Q3FY20). It had PBT of Rs 20 crore in the same quarter last fiscal. Rallis recorded consolidated revenues of Rs 534 crore in Q3FY20, a growth of 28 percent over Rs 417 crore in the previous year's quarter. Net profit jumped 177 percent to Rs 38 crore from Rs 14 crore in the year-ago quarter.

Shares of Tata Coffee rallied 8 percent on the BSE to hit a 52-week high of Rs 107 on Wednesday after the company reported a strong 61 percent YoY jump in its profit before tax (PBT) at Rs 53 crore for Q3FY20. The company had logged PBT of Rs 33 crore in the year-ago quarter. The company’s revenue from operations remained flat during the quarter at Rs 166 crore against Rs 165 crore in the corresponding quarter of the previous fiscal. Profit after tax (PAT) grew 53 per cent YoY at Rs 24.37 crore, the company said in an exchange filing.

Jubilant Foodworks, which operates Dominos and Dunkin Donuts, is set to declare its third-quarter results today. The stock was at a record high but fell on Tuesday ahead of its Q3 numbers. The street is expecting a revenue growth of around 13 percent at about Rs 1,050 crore. The EBITDA is expected to jump 56 percent primarily on account of the Ind-AS accounting standards. Rs 266 crore is what the street is expecting. Net profit is likely to grow by around 23.5 percent to Rs 120 crore. Same-store-sales-growth (SSSG) is expected between 5 percent and 7 percent. Watch full preview here

. @IndiGo6E EGM ends, results of the voting to be declared within 48 hours pic.twitter.com/qauqjp32HN

Shares of M&M Financial Services jumped over 7 percent in the early trade on Wednesday after the company reported a 14 percent rise in its net profit for the December quarter of fiscal 2020. The scrip touched an intraday high of Rs 380 after gaining 7.87 percent against the previous close of Rs 352.25 on the BSE. M&M Financial Services Ltd reported a 14.6 percent rise in its standalone net profit to Rs 365.3 crore in Q3FY20 as compared to Rs 318.7 crore in Q3FY19. The net profit was higher than CNBC-TV18 poll estimates of Rs 347.5 crore.

Total revenue from operations rose 5.28 percent YoY to Rs 20,721.8 crore as compared to Rs 19,680.7 crore in the corresponding quarter last year. The company sold a total of 4,37,361 vehicles during the quarter, higher by 2 percent compared to the same period the previous year. Sales in the domestic market stood at 4,13,698 units, higher by 2 percent. Exports were at 23,663 units.

#OnCNBCTV18, @ManappuramMAFIL's VP Nandakumar speaks to CNBC-TV18 after the co saw highest ever loan growth at 35% YoY, for the quarter-ended December pic.twitter.com/fE8sgVegBb

Godrej Consumer Q3 earnings: Net profit likely to grow by 6.5% Net profit is expected to jump by about 6.5 percent. Domestic volume growth is seen between 6 percent and 7 percent. Revenue growth of about 3 percent on a consolidated basis is expected. The EBITDA is expected to jump 7.5 percent, meaning a margin expansion of over 100 bps. The company has also spent more on advertising and publicity. Businesses in Indonesia, Africa, US and Middle-East also saw a decent performance in Q3. Watch full preview here
Share:

- The Sensex was trading over 270 points higher, while the Nifty reclaimed 12,150 level after 3 sessions of losses.

- Broader markets were outperforming the benchmarks with Nifty Midcap and Nifty Smallcap indices up 0.5 percent each
Share:

Financial services company Bajaj Finance is set to declare its third-quarter results today and it is expected to be a good quarter for the company. Here are the key expectations:

The company has raised about Rs 8,500 crore in Q3 which should aid in controlling the cost of funds. The assets under management (AUM) growth is at 35 percent, an 8-quarter low. However, its customer acquisition remains strong.

The number of loans disbursed jumped sharply by 19 percent quarter-on-quarter when compared to a de-growth in Q2. So, sustaining the gross non-performing assets (NPA) below 1.6-1.65 percent will be positive. CNBC-TV18 poll suggests net interest income (NII) growth of 11 percent YoY while the net profit is expected to be up about 44 percent on a YoY basis. Watch the full preview here