- All Sectoral Indices Close In The Red, Media Top Loser

Sectoral Trend: Major selling was seen in media, auto, and IT indices 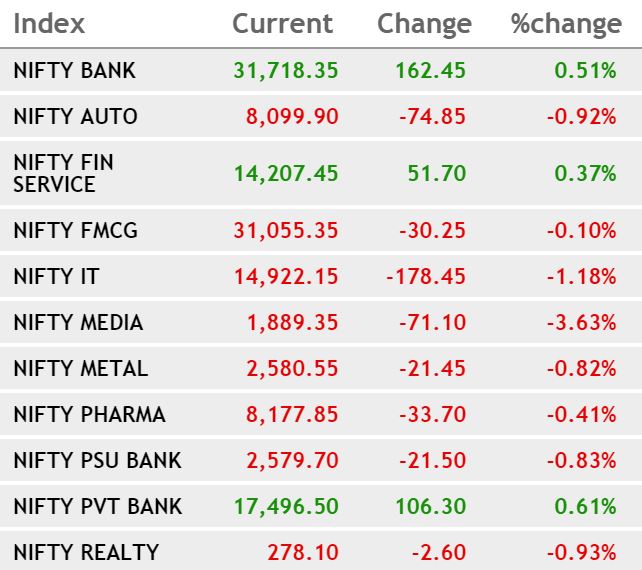 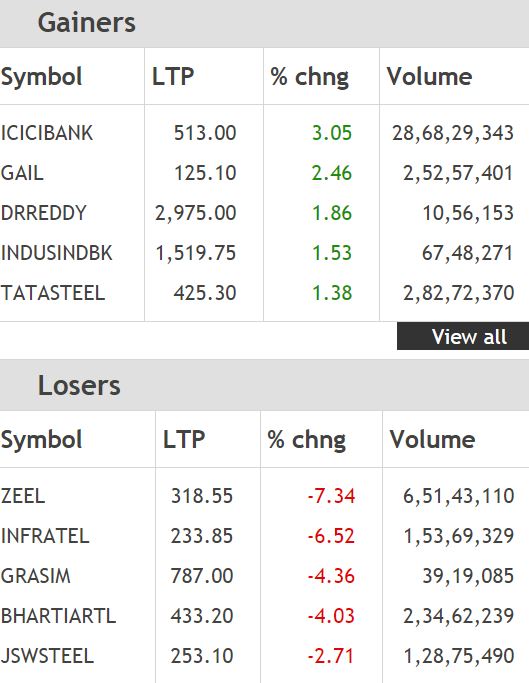 The broad market has been participating in the rally in the last two months unlike earlier when the rally was narrow on quality and visibility, Nimesh Chandan, Head-Investment and Equity, Canara Robeco, said. “There is participation from quality cyclicals as well as small and midcaps. Our portfolios have moved to include some of these broad market changes. Internationally also, there has been a change in commodities in bond markets towards more risk-on,” he said, adding that this broad market participation would help create a healthy rally. READ MORE Anil Ambani's Reliance Group has generally had a torrid year at Dalal Street. However, there is one penny stock in the group's bouquet that has not declined even once since September 9. Reliance Naval and Engineering. This scrip in over two months has jumped a whopping 663 percent! On September 9, the scrip traded at Rs 0.95 and on November 26 it is trading at Rs 7.25 per share on the NSE. The stock was listed on the bourses on October 9, 2009, at Rs 61.10. READ MORE

Indian markets on Tuesday hit new milestones, before giving up most of the intra-day gains. The Sensex hit 41,000 for the first time, rising to 41,120 at day's high. The broader Nifty also hit a new intra-day high of 12,132, overtaking June highs of 12,103. Managing Director of Kotak Mahindra Asset Management Company (AMC) Nilesh Shah shared his views and outlook with CNBC-TV18.

Shares of InterGlobe Aviation Ltd, the IndiGo airline operator, fell more than 4 percent on Tuesday after the Directorate General of Civil Aviation (DGCA) restricted the airliner from operating glitch-prone Airbus A320 and A321neo aircraft. The aviation regulator instructed IndiGo to ensure that, for every new A320neo plane that it adds to its fleet, it grounds an old A320neo family aircraft with an unmodified Pratt and Whitney (PW) engine. READ MORE

RBI likely to cut repo rates by 25 bps, but still no respite for economy: Reuters poll

The Reserve Bank of India is expected to cut interest rates in its December bi-monthly monetary policy and again before July, according to economists in a Reuters’ poll. However, the economists forecast that these reductions would either marginally boost the economy or have no impact.

The latest Reuters poll predicted the RBI would cut its repo rate for the sixth time in a row by 25 basis points to 4.90 percent at its December 3-5 meeting, according to median forecasts from more than 70 economists. That would mark the longest streak of consecutive rate cuts since the current interest rate framework was introduced nearly 20 years ago. READ MORE

The 50-share NSE index this year has surged 10 percent to date and touched its lifetime high on Tuesday by crossing 12,100 mark. The index received a big boost from stocks that contributed 60 percent gains since August -- Reliance Industries, HDFC Bank, ICICI Bank, and HDFC. During the day, Sensex hit its day's high at 41,120.28 while Nifty50 touched 12,132.45 level.

And, in all this while, one sector that surged the most is Nifty Financial Services. The finance index this year saw a 22 percent rise followed by Nifty Realty that rose 19 percent. READ MORE 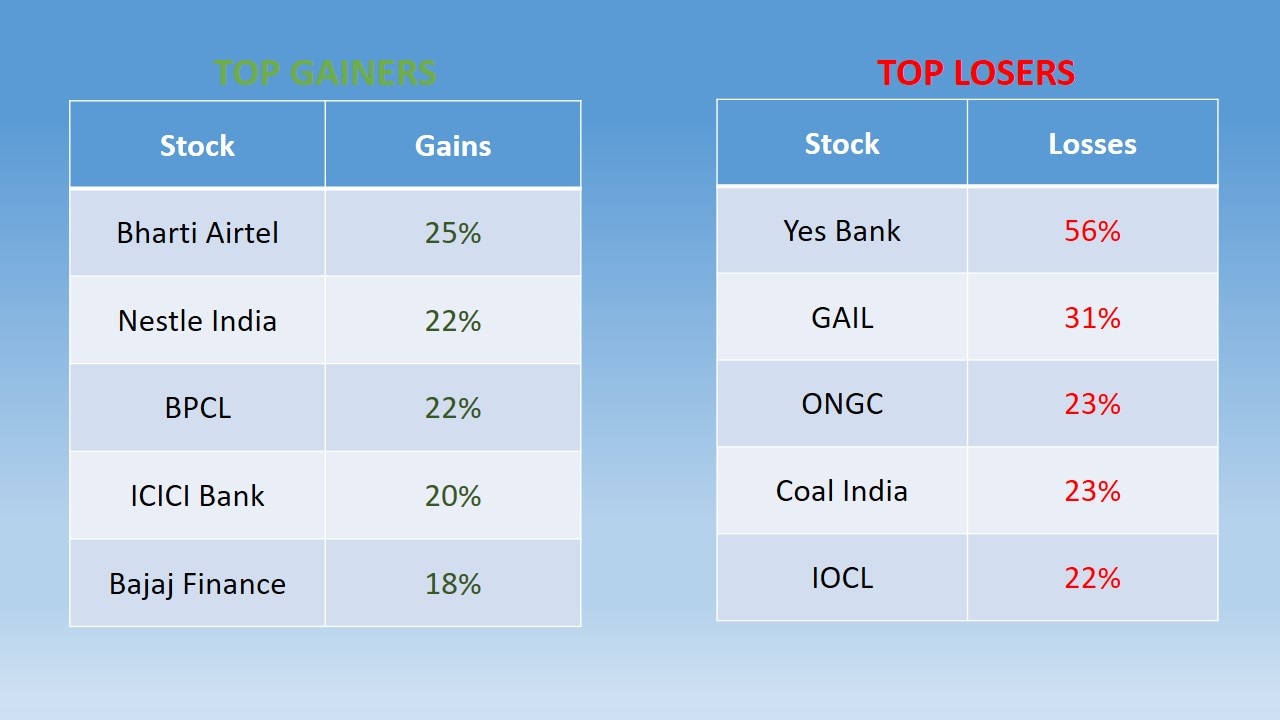 - Today was a historic morning of trade as the Nifty hit a record high of 12,132, surpassing its earlier high of 12,103 hit in June this year. It was followed by a record high on Bank Nifty as well lead by heavyweights like ICICI Bank.

- However, at noon the market has lost some of its gains amid profit booking. The Bank Nifty is still holding up with 0.5 percent gains led by Yes Bank, ICICI Bank, and IndusInd Bank.

- Important psychological levels have been conquered with Sensex crossing 41,000 for the first time ever. with this, the index is now up 13 percent in 2019 outperforming many of its emerging market peers.

Atul Suri, CEO of Marathon Trends PMS, believes the Nifty could touch 13,500 by the end of 2019. "Headlines may be negative but market is saying something else," he said. Suri said that currently, liquidity is driving the market but it will reward growth soon. He added that "we are in for another good year" as we are "riding on FII and SIP flows". According to Suri, 2020 is going to be dominated by the global bull market. "However, I feel that this could be a big catchup trade and we could see a wall of money coming in India." READ MORE

Market fails to hold life high, Nifty down 52 points from the record high of 12,132.50 hit in opening trade 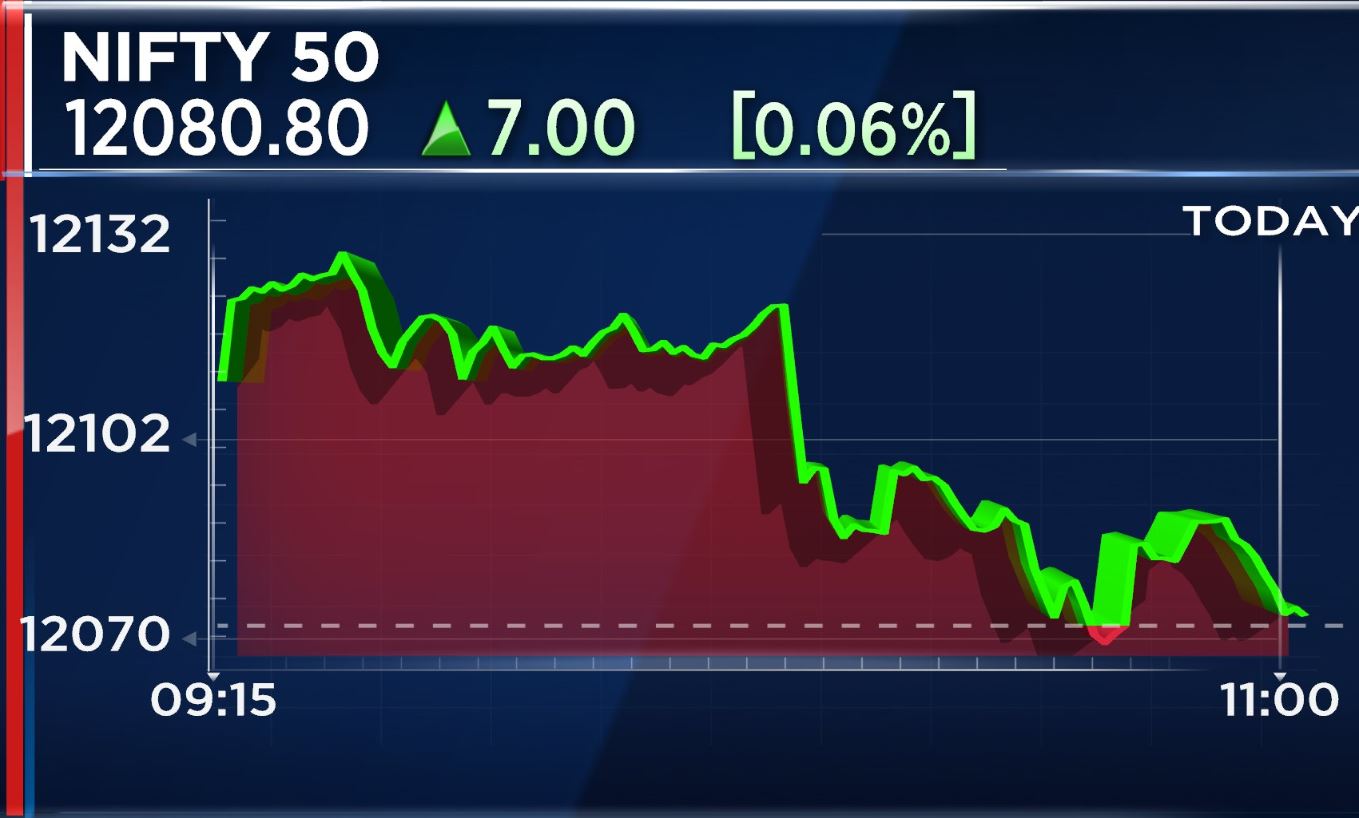 The government and the Reserve Bank of India (RBI) are discussing ways to implement a one-time waiver for real estate companies on loan repayments, sources aware of the talks told CNBC-TV18. The move, as the sources said, is aimed at helping the real estate companies complete last-mile funding for the unfinished projects. The real estate sector has been under pressure due to massive NPAs. Increasing NPAs have led to the sector struggling to raise fund, which in turn, affects the homebuyers as their projects remain stalled. READ MORE

The recent move in the market has been surprising because it does not corroborate with the ground data but it was expected, Mahesh Patil, co-chief investment officer, Aditya Birla Sun Life AMC, told CNBC-TV18 in an interview. Globally, there is an increase in money supply and that is moving back into risk asset class. Moreover, with increase in money supply there could be some upward movement in global growth, he added.

“This optimism is rubbing on to India and so we have seen good inflows from FIIs in the last couple of months, which has taken the market higher,” said Patil. READ MORE

Trading vs stock investing: Understand the difference to avoid pitfalls 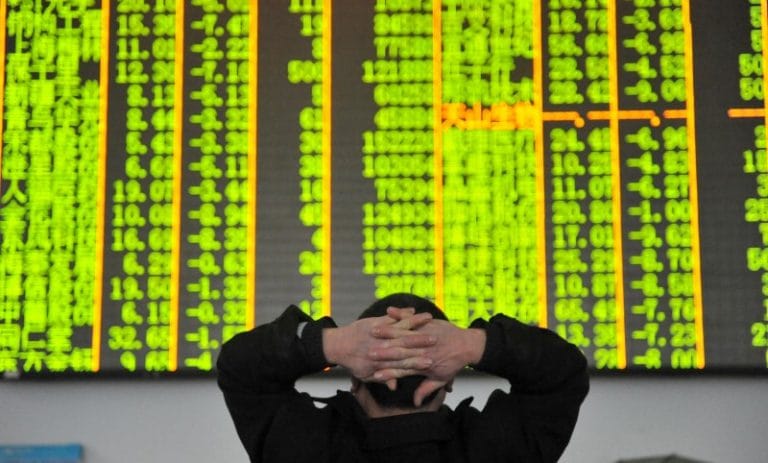 Shares of Indoco Remedies Ltd. rallied over 6 percent after it announced that its Clinical Research Organisation, AnaCipher, located at Hyderabad received Establishment Inspection Report (EIR) for the inspection carried out by the United States Food and Drug Administration (division of New Drug Bioequivalence Evaluation). The inspection was carried from August 5 to 9 and was successfully conducted without any observations and stands closed now, the company said in a regulatory filing. READ MORE

The share price of Zee Entertainment plunged 9 percent intraday on Tuesday after Subhash Chandra resigned as board chairman of the company with immediate effect. Zee Entertainment's board has accepted Subhash Chandra's resignation and said in a company release that he will continue as a non-executive director of the board. The Zee board has also appointed six independent directors. All these new appointments will have to be approved by the shareholders. READ MORE

- Indian markets pared some gains to trade off hit record highs as gains in banking stocks were capped by losses in media, telecom stocks. The Sensex fell below the 41,000 levels and Nifty was trading below 12,100 mark

Shares of Reliance Communications jumped more than 6 percent intraday on Tuesday after Bharti Airtel, Reliance Jio and two others submitted their bids for assets of the bankrupt company. Intraday, the stock went up 6.25 percent to touch Rs 0.85 per share on the NSE. Reliance Communications, Reliance Telecom and Reliance Infratel are up for sale. According to a report in Moneycontrol, 11 bids have been received from the four companies for the assets of these three companies of Reliance Group. READ MORE

Top gainers since then:


Top losers since then: Sectoral Trend: All sectoral indices, except Nifty Media, were positive at opening 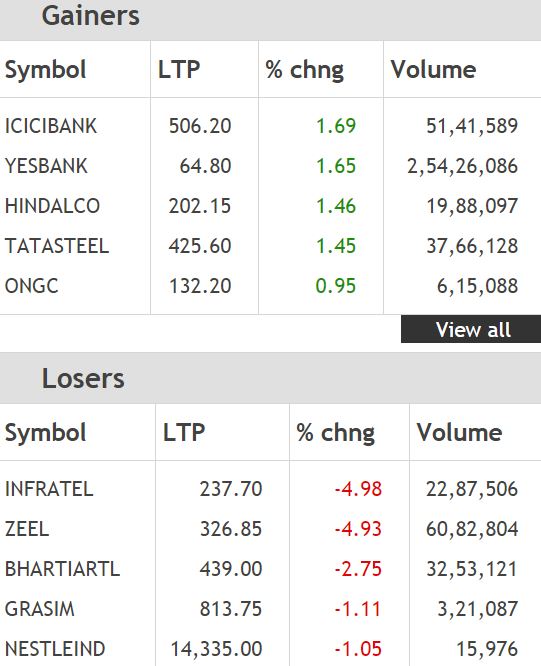