Indian shares ended lower on Friday dragged by banks, auto, and metal indices ahead of the Q2 GDP data later today. The BSE Sensex settled 336 points lower at 40,794, while the Nifty lost 95 points to end at 12,056. However, for the week both indices settled 1 percent higher.

Indian shares ended lower on Friday dragged by banks, auto, and metal indices ahead of the Q2 GDP data later today. Investors remained cautious on expectations of slower economic growth in the September quarter and as rising uncertainty over a Sino-US trade deal hurt demand for risk assets. The BSE Sensex settled 336 points lower at 40,794, while the Nifty lost 95 points to end at 12,056. However, for the week both indices settled 1 percent higher.  Among broader markets, Nifty Midcap and Nifty Smallcap indices outperformed benchmark indices, up 0.1 percent and 0.9 percent, respectively.

Sectoral Trend: All sectoral indices,  except Nifty Realty, end in red for the day Acommodity that is widely used in most sectors including pharmaceuticals, FMCG, consumer durables, agriculture, real estate, amongst others is chemicals. The chemical industry remains a niche market with good long-term opportunities and is forecasted to grow at 13 percent CAGR over 2019-25. Stocks of chemical companies that have continued to deliver excellent returns are Vinati Organics, Aarti Industries, and Deepak Nitrite. With a market capitalisation of Rs 10,000 crore, Vinati Organics in the last 10 years gave nearly 3,200 percent returns, which is the highest in the sector. READ MORE

Automobile sales in the month of November are expected to be a mixed bag. Passenger vehicles (PV) may have registered a marginal growth led by extended deliveries post festive season, while two-wheeler retail sales may remain weak as it failed to sustain the recovery, analysts said. “Two-wheeler channel partners indicate significant decline in demand post festive. Retails in urban market declined by 10-15 percent YoY (on a high base) while it remained flat to negative in rural markets,” brokerage firm Prabhudas Lilladher said in a report. READ MORE

Ujjivan Small Finance Bank IPO opens next week: All you need to know 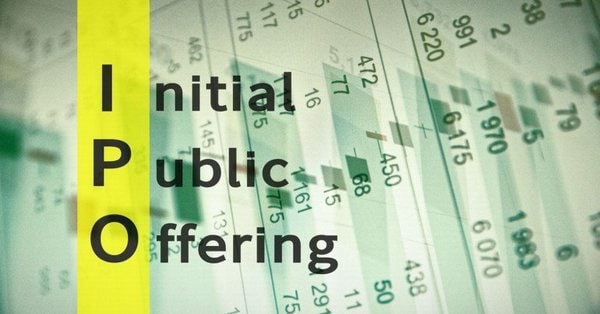 India's GDP growth came in at 5 percent in the first quarter of the fiscal year 2019-20 and is expected to sink further in Q2FY20. Manufacturing growth particularly may have taken a hit, given a high base and volume decline as was seen in the subdued industrial production data. The average outstanding growth of the NBFC sector has gone down further to around 35 percent YoY in Q2 from around 39 percent in the last quarter. Domestic passenger vehicle sales continued their decline for the last six months, particularly the lower strata PVs. Unseasonal rains contributed to crops getting spoilt. Industrial credit growth in several sectors has taken a hit. READ MORE

Despite weakening loan demand, Credit Suisse has 'outperform' call on these three banks Credit Suisse, in its latest report, said that the banking sector is witnessing an increase in liquidity surplus while the loan growth continues to remain weak. While the credit businesses are still facing challenges, Credit Suisse is maintaining an 'outperform' call on three banks — HDFC Bank, ICICI Bank and SBI as "their distribution businesses are continuing to do well".

According to the report, in its recent financials field trips, all the banks Credit Suisse met highlighted weakening loan demand and rising liquidity surpluses. HDFC Bank and the State Bank of India have excess liquidity of $7 billion and $15 billion, respectively, said the report. READ MORE Here's a quick catchup of all live market action: - The benchmark indices extended losses in afternoon deals with Sensex down over 400 points and Nifty below 12,050 ahead of Q2 GDP data. - Bharti Infratel, Adani Ports, Bharti Airtel, NTPC, and Coal India were the top Nifty gainers, while Dr Reddy's Hindalco, M&M, Asian Paints, and HUL, led the losses.  - Auto stocks remained under pressure ahead of November auto sales numbers. Nifty Auro index fell over a percent with TVS Motor Company, Ashok Leyland, M&M, Eicher Motors, and Tata Motors down between 1.5-3 percent. - All Sectoral indices, except Nifty Realty, were trading in red. Nifty Auto, Nifty PSU Banks, Nity MEdia, Nifty Metal, and Nifty IT indices fell over a percent each.
Share:

HCC rises over 5% after winning challenge in SC

The share price of Hindustan Construction Company on Friday was trading over 5 percent on the NSE after it won a challenge in the apex court for setting aside Section 87 of the Arbitration and Conciliation Act. 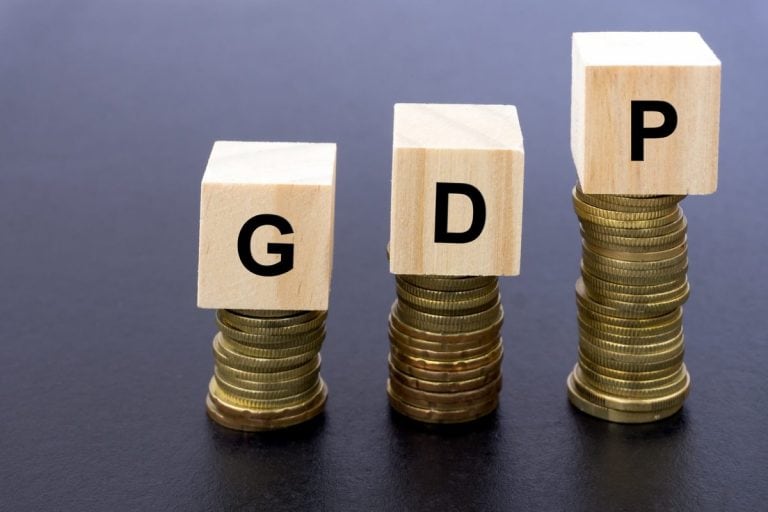 This stock rallied 15% in just 4 days, doubled investor wealth in 2 months. Find out

Shares of Yes Bank rose as much as 15 percent in just four days after the private sector lender announced that the board will meet on November 29 to discuss fundraising plans. For today, the stock gained over 5 percent. The sentiment was also positive after Edelweiss Securities upgraded Yes Bank to ‘Buy’ with a target price of Rs 101, indicating an upside of 40 percent from the current market price.

The scrip has risen 22 percent in 1 month and has doubled investor wealth, surging 131 percent since October 1. However, the stock has fallen 59 percent in the last 1 year and over 61 percent on a year-to-date basis. READ MORE

Bharti Airtel, Vodafone Idea may hike tariffs by up to 30%

Telecom service providers Bharti Airtel and Vodafone Idea are likely to increase the prices of their services by up to 30 percent, sources told CNBC-TV18 on Friday. The hikes will depend on circles, plans and services, said the sources, on the condition of anonymity, adding that while the increase in the prices will start from 8 to 10 percent, in some select cases, the rise could be between 25 to 30 percent. According to the sources, the hikes could be staggered and implemented over a period of time. READ MORE

The Competition Commission on Thursday said it has given approval to the acquisition of 37.4 per cent shareholding and joint control by Total Group in Adani Gas. The proposed combination represents an investment opportunity for Total along with its subsidiaries and affiliates (Total Group) given the future of natural gas business in India. "Total Group believes in the initiatives taken by the Government of India to increase the reliance on natural gas instead of petroleum-based products," the Competition Commission of India (CCI) noted. READ MORE

"Bharti Airtel seems to be the highest bidder with bids of around Rs 9,500 crore. However, the final result will be known on Friday after the committee of creditors (CoC) opens all the bids," the source said. E-mail query sent to Bharti Airtel did not elicit any reply. READ MORE
Share:

Here's a quick wrap-up of how the markets have fared so far today -Market benchmark BSE Sensex dropped over 350 points in early trade on Friday tracking losses in in index-heavyweights RIL and ICICI Bank ahead of quarterly GDP growth data release.

-Midcaps outperformed with the Nifty MidCap 100 index up by 0.26 percent. Bank Nifty traded well over half a percent lower.

Indiabulls Housing Finance climbs 11% after MCA finds no irregularities in loans The shares of Indiabulls Housing Finance climbed 11 percent on Friday after the Ministry of Corporate Affairs (MCA) found no signs of foul play in the loans cited by a PIL. The sentiment was also boosted after CLSa retained 'buy' rating on the stock and raised its target price. A PIL had raised concerns and allegations based on loans extended by IHFL to DLF, Amricorp, ADRG, Vatika and Chordia. The affidavit filed by MCA says that of the five, DLF, ADRG and Amricorp have fully repaid the loans extended. Meanwhile, as per the affidavit, the other two entities are categorised under "standard accounts", thereby suggesting that the two entities have been regularly servicing their debt. READ MORE
Share:

The share price of Aurobindo Pharma rose 2.7 percent intraday on Friday after the company's subsidiary entered into a pact with Profectus BioSciences to buy certain business assets. At 10:16 am, the stock price was trading 1.18 percent higher to Rs 454.95 per share on the NSE while on an intraday basis, the shares rose 2.7 percent at Rs 461.85.

PIL against IndiaBulls Housing Fin: MCA finds no foul play in loan allocations cited, spots other violations Just a day before the Delhi High Court hearing, an affidavit filed by the Ministry of Corporate Affairs has come as a mixed bag for IndiaBulls Housing Finance. While on the one hand, MCA's inspection report has found no signs of foul play in the loans cited by the PIL, on the other hand, there are other violations that have surfaced. The MCA, acting under Section 205 of the Companies Act, had directed an inspection of books of account of Indiabulls Housing Finance, Indiabulls Ventures and Indiabulls Real Estate in July of 2018. The MCA received the inspection reports of IVL and IHFL in November 2019. It is yet to receive the inspection report of IRE. READ MORE
Share:

Prasanna, chief economist, ICICI Securities-Primary Dealership, is expecting the GDP growth at 4.7 percent for the second quarter. He said the number was arrived at after taking into consideration the strong government spending in the second quarter. The number, he said, could be even lower in the absence of government spending. He acknowledged that there were reports that the number could even be 4 percent.

“If you look at high-frequency indicators pertaining to the private sector, even we were getting a number closer to 4 percent, but second quarter’s government spending — both the central and state governments... the spending growth was very strong. Therefore, taking that into account, we arrived at 4.7 percent,” said Prasanna in an interview with CNBC-TV18. READ MORE
Share:

Let's take a look at index gainers this morning Index losers this morning; ICICI Bank lower after a week of gains 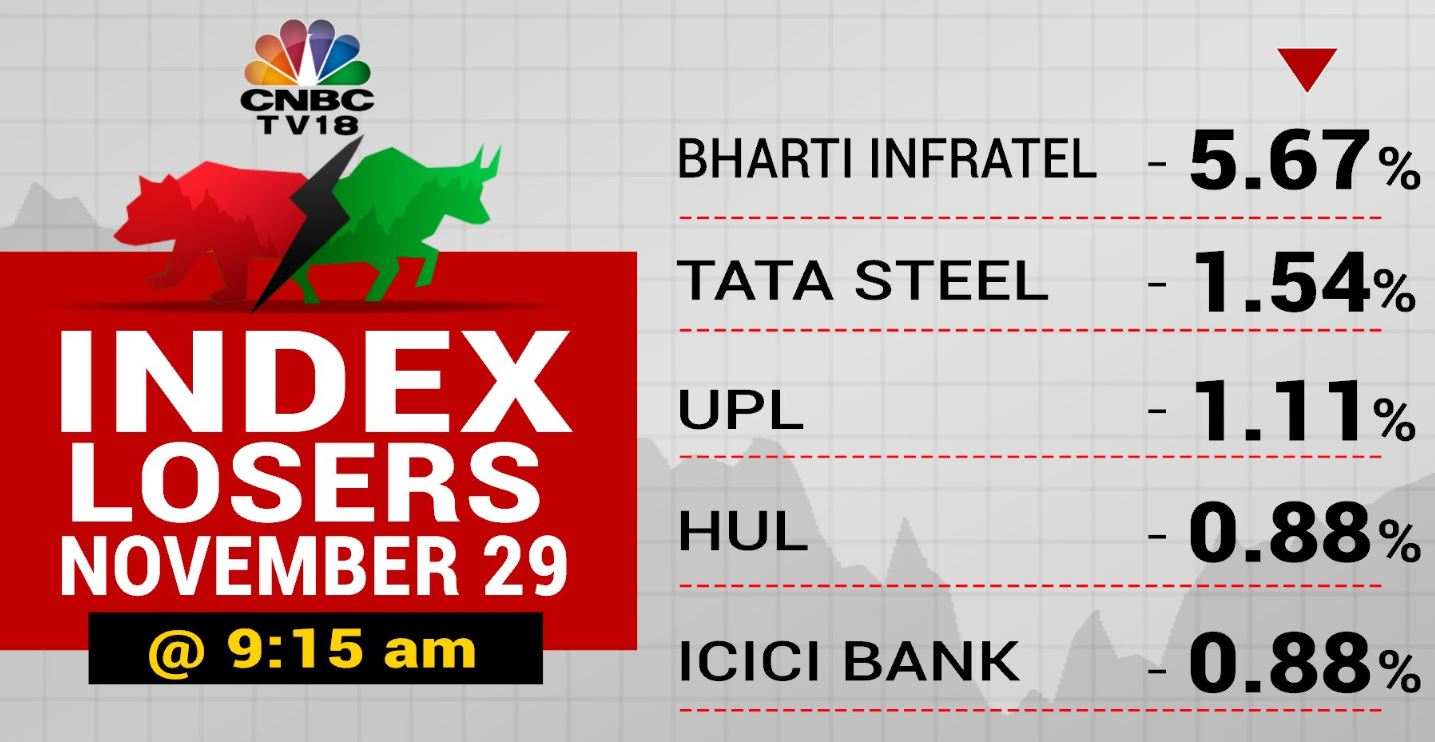 Indian shares opened in red on Friday ahead of the release of Q2 GDP data.   At 9:17 am, the Sensex was trading 115 points lower at 41,015, while the Nifty lost 35 points to trade at 12,115. A CNBC-TV18 poll projected Q2 GDP growth of 4.64 percent, down from 5 percent in the Q1FY20 and 7 percent from the same quarter a year ago. In the first quarter, GDP growth fell to an over six-year low of 5 percent in an unexpected surprise for the government and the Reserve Bank of India.

Yes Bank, Zee, GAIL, Sun Pharma, and UltraTech Cement were the top gainers on Nifty, while Bharti Infratel, Tata Steel, Vedanta, Reliance Industries, and UPL led the losses. Major selling was seen in private banks and metal indices. The Nifty Metal index fell the most, down 0.5 percent, followed by Nifty Bank and Nifty Private Bank, which fell 0.2 percent each.