Indian shares ended higher on Wednesday, with both Sensex and Nifty at their record closing highs led by gains in banking, auto, metal, and IT stocks, ahead of November F&O expiry due tomorrow.

Sentiment was also boosted tracking broader Asian equities, as upbeat comments by US President Donald Trump stoked hopes that Washington and Beijing would hammer out an interim trade deal soon.

Here's a quick roundup of all market action of the day:

Sectoral Trend: Major buying was seen in banks, auto, and IT stocks 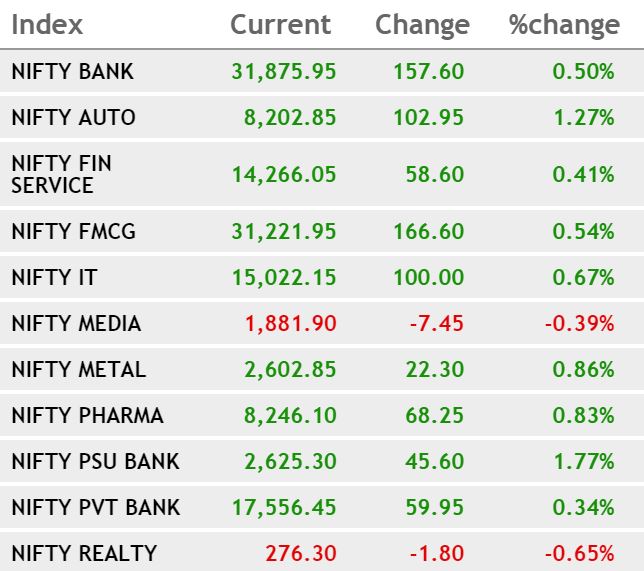 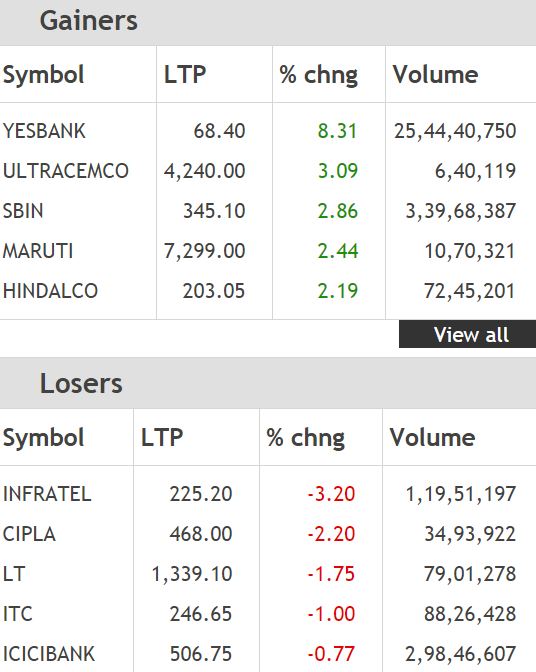 The telecom sector has been trending ever since the Supreme Court came out with its ruling on adjusted gross revenue (AGR). Despite the moratorium relief provided by the finance minister, the telcos are still staring at their poor financials and falling market share. Despite all the negatives, Emkay Research believes that there's an opportunity in the sector and thus, gave an 'equal weight' stance on the sector with an 'overweight' call on Bharti Airtel.

Meanwhile, Vodafone Idea continued to see pressure with a 6 percent QoQ revenue decline and 66bps decline in revenue market share. The telco has lost market share in 20 out of 22 circles which contribute 95 percent to its AGR. READ MORE

There has been a reshuffle of the board at Zee Entertainment Enterprises after Subhash Chandra resigned as chairman. There have also been new appointments as far as independent directors are concerned. Amit Tandon, MD of Institutional Investor Advisory Services (IiAS), and Shriram Subramanian, founder and MD of InGovern, discussed with CNBC-TV18 what the market makes of this reshuffle.

Tandon said he believes Zee Entertainment could have waited before announcing the board rejig. “Given the fact that all these changes happened in shareholding, the company could have waited for 4-6 weeks to absorb all this, have a meaningful dialogue with investors in terms of understanding what their expectations are before they went ahead and announced these changes,” Tandon added. READ MORE

Metal stocks to sustain price recovery as China's steel production rises; index up 8% in one month Metal stocks in the last few days surged the most on renewed hopes of positive developments between the US and China. China remains a vital market for steel production and export. Thus, there was a surge in the Nifty metal index of nearly 8 percent over the last month as steel production in China rose 6 percent YTD.

According to a report by Edelweiss, the latest domestic hike follows the global increase in prices and has lifted spreads by 5-20 percent across regions. Three main reasons behind the uptrend in the pricing visible globally are i) US prices are currently $600/tonnes, up 8 percent from its low in October. ii) In Europe as well, the price increase of nearly 4 percent (to $485/ tonnes) seems to have been absorbed well. iii) Chinese domestic prices have picked up RMB100/tonnes to nearly RMB3,700/tonnes over the three-week period. READ MORE

Exclusive: Sachin Bansal on his investment strategy, his special interest in finance and the sectors he is bullish about Naturals, as a trend is here to stay, says Hindustan Unilever

1. Taking a decision on launch timelines depending on the size of categories

3. Plan to get the full range of products in natural care to India soon

4. Have had a good response in the pilot launch in Naturals space

5. Naturals as a trend is here to stay

7. Growing faster than the market in the Naturals space

8. See healthy growth in beauty and personal care market in the long term

The real estate sector has been a casualty of the liquidity crisis as well as the demand slowdown, yet this realty stock has risen 25 percent in the last one year.

This year has been choppy for DLF yet its stock managed to gain 20 percent on a year-to-date basis. For global brokerage Morgan Stanley, the real estate giant is its top pick in the sector. The brokerage on Sunday upgraded the stock to 'overweight' and raised its target price to Rs 269 from Rs 210 earlier, implying a return potential of 25 percent. READ MORE
Share:

Moody's says, "There is uncertainty around BPCL's future strategy."

1. Rating factored in government support for BPCL, which we cannot count on now

2. There is uncertainty around BPCL's future strategy and capital structure

3. BPCL has large short and long-term borrowings that become payable on government exit

4. Not sure how the subsidy reimbursement or LPG distribution work

5. The government wants divestment done by March 2020, but there is a lot of work still to be done

6. Have seen refining margins decline to below $1 in November, which is the worst

Ujjivan Small Fin Bank says co has been in discussion with RBI about a reverse merger in 5 years pic.twitter.com/GPiM55lJA6

Q2FY20 GDP growth could be at 4.5%, says Indranil Pan of IDFC First Bank

The Indian economy expanded 5 percent in the April-June period, its slowest annual pace since 2013. The second-quarter gross domestic product (GDP) data is due this Friday and the expectation is it could be sub 5 percent. "After the 5 percent data for Q1, we were looking at a 5.3 percent number. But after looking at all lead indicators, we are now at 4.5 percent in terms of GDP number for Q2FY20," said Indranil Pan, Chief Economist, IDFC First Bank.

One key lead indicator will be government expenditure, he said, adding that the government has been forwarding its expenditure pattern in a significant way in Q2 and that probably will have a buffering effect on the downside bias that GDP has. READ MORE

Stock gains to be limited in 2020 as economy slows, says poll

Indian stocks are set to rise further over the coming year, according to a Reuters poll of equity strategists, but those gains will be limited as fiscal stimulus and easy monetary policy fail to reverse an economic slowdown. The BSE Sensex index was forecast to rise another 6.7 percent to 43,645 by end of next year from Monday's close of 40,889. It has gained over 13 percent in the past two months and repeatedly set record highs after the government announced several measures, including a corporate tax cut. That expected rise in stocks in the November 11-26 poll of 50 strategists would be half the rally so far this year and similar to the average rate for fixed deposits — a relatively safe asset — in Indian banks. READ MORE RITES' shares gain over 29% YTD; 10% stake sale fetches Rs 729 crore for govt RITES Ltd's shares have returned over 29 percent year-to-date, despite falling 7.5 percent in the last one week. The railways' consultancy firm quoted at Rs 283 apiece on BSE, higher by 0.30 percent, after opening at Rs 283.70. The stock hit the day's high at Rs 285.20. The one-year return on the stock is also positive with RITES Ltd shares adding over 29 percent in value. Axis Securities had recommended a long-term target price of Rs 328 for RITES in its report in early October. The 10 percent offer for sale of RITES was fully subscribed with disinvestment proceeds of Rs 729.44 crore. "The government undertook Offer for Sale (OFS) for 10 percent of paid-up equity in RITES Limited on November 22-25. The Base offer was fully subscribed (100.01 percent) with disinvestment proceeds of Rs 729.44 Crore," said Department of Investment and Public Asset Management (DIPAM). READ MORE
Share: 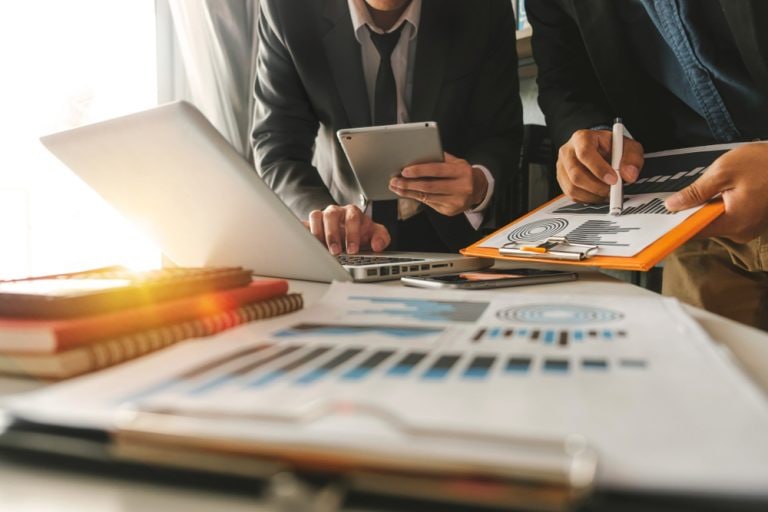 Here's a quick catchup of all live market action: - The benchmark indices were trading higher, tracking gains in Asian peers on positive developments in the US-China trade deal.

- Yes Bank, Tata Motors, Maruti Suzuki, M&M, and HDFC were top gainers on Sensex, while L&T, Tata Steel, ICICI Bank, and NTPC led the losses. - Major buying was seen in the auto space following news that Cabinet nod is awaited for the approval of scrappage policy in today's meeting. Media and IT sectors also rose over 0.5 percent each. - Yes Bank's share price rallied over 9 percent intraday on Wednesday as the company decided to hold a meeting to discuss and consider raising of funds.
Share:

A focus on growing key brands and increasing acceptance of patented products has boosted the performance of multinational pharma companies in India, brokerage firm CLSA said in a report.

CNBC-TV18 had first reported about extension to Finance Commission on November 6 pic.twitter.com/F5qYKiAzG7

Aban by the market regulator on Karvy Stock Broking from taking on new clients and executing trades for allegedly misusing client securities has unnerved the country's retail investors. The Securities and Exchange Board of India (Sebi) barred Karvy on Friday after a preliminary investigation by the National Stock Exchange (NSE) showed the brokerage pledged and sold some of its client securities to raise funds for its own use, without client authorisation and in violation of new rules.

Karvy said in a statement over the weekend that there was no "mis-utilisation" of client securities. Some investors are considering a move to big, bank-owned brokerages even if they cost more, according to three financial advisers, bucking a recent trend towards discount brokers. READ MORE

Auto stocks gain as scrappage policy awaits Cabinet approval today The Nifty Auto index rose 1.5 percent during trade on Wednesday following news that Cabinet nod is awaited for the approval of scrappage policy in today's meeting. The Ministry of Road Transport and Highways has prepared a draft note on scrappage policy for vehicles older than 15 years. The draft policy has been sent to the Prime Minister's Office for approval after final comments from all ministries.

All constituents in the auto index were trading in positive in early morning deals. At 10:05 am, Bharat Forge, Tata Motors, Ashok Leyland, M&M, Maruti Suzuki, and TVS Motor Company were up between 1.5-3 percent. In comparison, the Nifty50 was trading 0.4 percent or 43 points higher at 12,081. READ MORE

Global brokerage Moody's Investors Service has placed Bharat Petroleum Corporation Ltd's (BPCL) rating on review for downgrade after the government decided to privatise the country's second-biggest state oil refiner. "The review for downgrade follows the government of India's decision to sell its entire 53.29 percent stake in BPCL and to transfer management control of the company to a strategic buyer," the rating agency said in a statement. The ratings placed on review for a downgrade include BPCL's ba1 baseline credit assessment, its Baa2 issuer rating and Baa2 backed senior unsecured rating for Bharat PetroResources Ltd, a subsidiary of BPCL. READ MORE 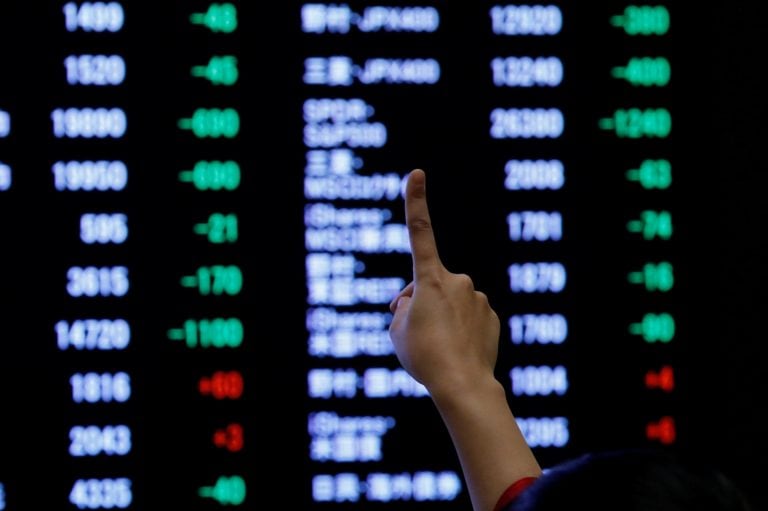 In an interview with CNBC-TV18, Founder and Fund Manager of Helios Capital Samir Arora said the momentum will sustain but the rally needs to broaden.Get latest Economy online at cnbctv18.com

YES Bank rises 9% as board to discuss and consider fundraising

Anil Ambani's Reliance Group has generally had a torrid year at Dalal Street. However, there is one penny stock in the group's bouquet that has not declined even once since September 9. Reliance Naval and Engineering. This scrip in over two months has jumped a whopping 663 percent! On September 9, the scrip traded at Rs 0.95 and on November 26 it is trading at Rs 7.25 per share on the NSE. The stock was listed on the bourses on October 9, 2009, at Rs 61.10. READ MORE

Nifty Bank back at record high 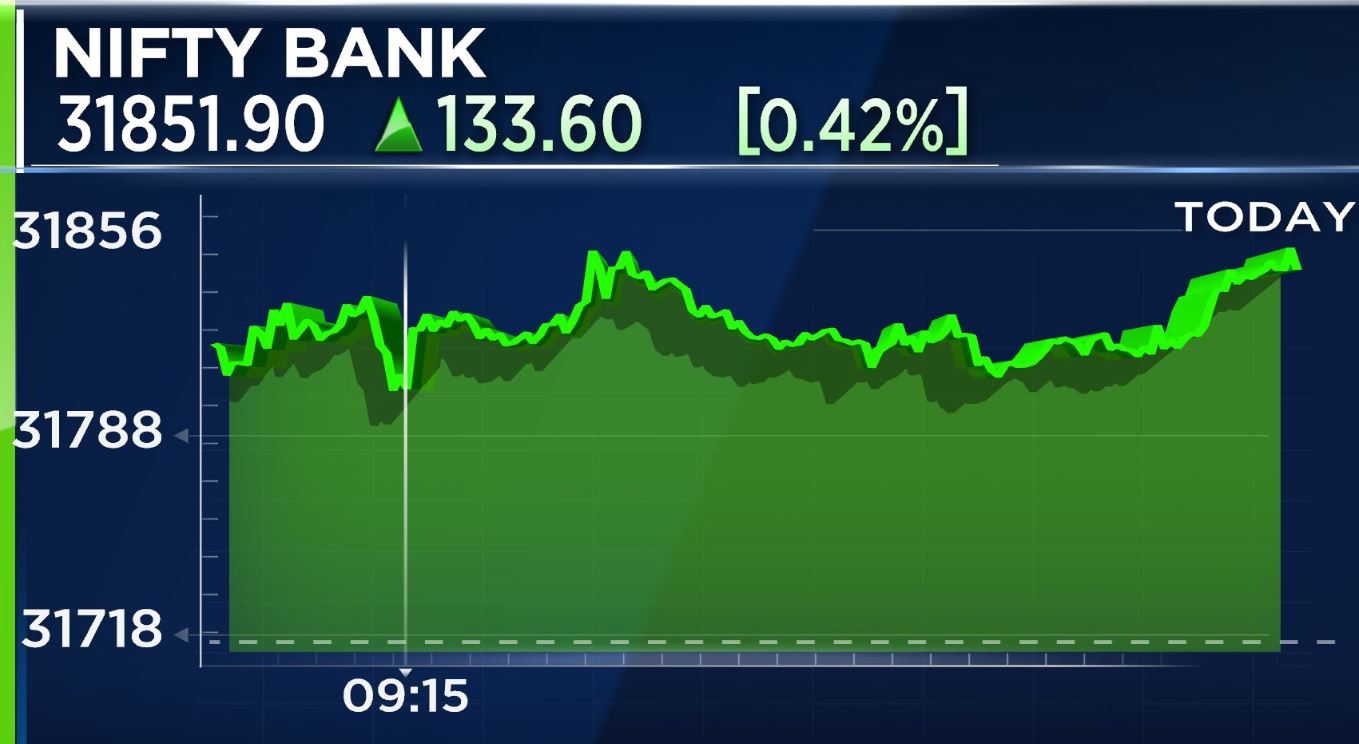 Here are the top losers in the opening hour of trade 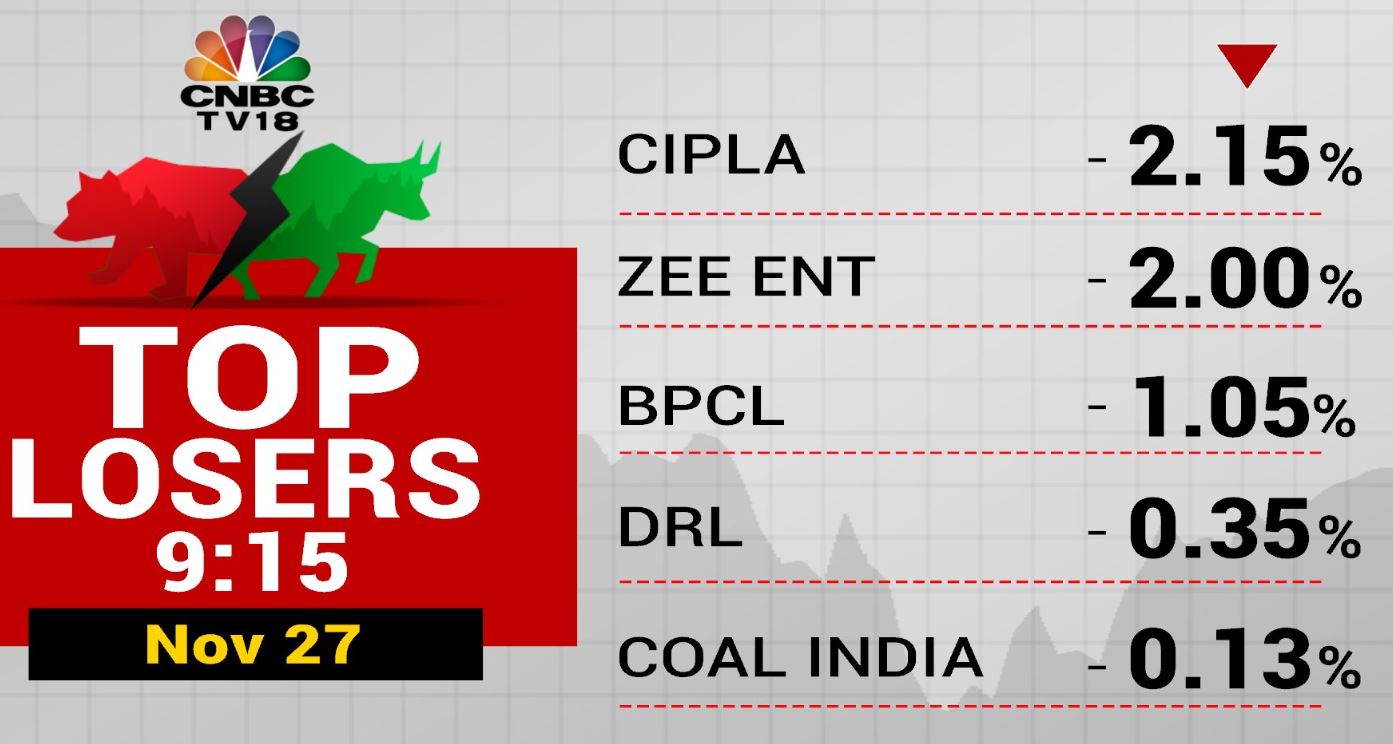