Indian indices ended lower due to weak global cues. The S&P BSE Sensex ended 3.2 percent lower at 30,636 while the NSE Nifty50 closed below the 9,000 mark at 8,981. Private banks and the IT stocks were the two main indices that have dragged the market down today. Barring Nifty Pharma, all indices ended in the red today. IndusInd Bank and Bajaj Finance were the top losers. Keep tracking our website to receive more news on the stock market, economy and the corporate world.

7. ICICI falls over 8 percent after company confirms exposure to Singapore based Hin Leong

8. Bajaj Finance plunges after UBS downgrades the stock to sell and cuts target to Rs 1,600

9. IT under pressure as US looks to suspend immigration temporarily

11. Nifty Pharma, the only sectoral index to close in the green, up 2.5 percent

ICICI Bank says have exposure to the Singapore-based Hin Leong Group, taking steps to protect our interests. Adds that it will reflect in the bank's financial statements@ICICIBank #HinLeong pic.twitter.com/QgMKzdTRK4

The Indian government has already started shoring up its strategic petroleum reserves after crude prices crashed to historic lows late on Monday night.

During the G20 Extraordinary Energy Ministers' virtual meeting on April 10, Petroleum and Natural Gas Minister Dharmendra Pradhan emphasised that India will remain a global energy demand center and that the government will put in all efforts to fill its petroleum reserves. Read more on this story here!

The company has informed the exchanges that it is going to re-start its operations at Champa and Raipur plants in Chattisgarh with effect from April 25.

Nifty50 Indices Update: Nifty Private Bank is the worst-performing index of the day, down by 5%, while Nifty Pharma is the best-performing, up 3%. 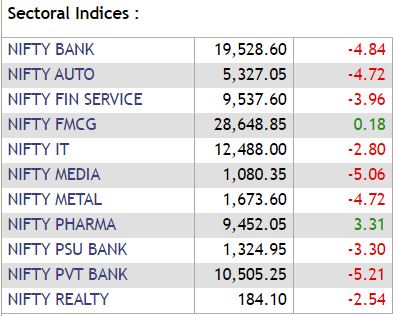 Prataap Snacks informed to the exchanges that it has resumed operations in its manufacturing facilities based in Guwahati, Assam.

The plants were temporarily shut due to COVID-19, however, the company has now restarted operations in-line with the Government of Assam's terms and conditions.

The Indian rupee ended the day near its record low level amid heavy selling in the domestic equity market on the back of historic drop in the crude oil prices. 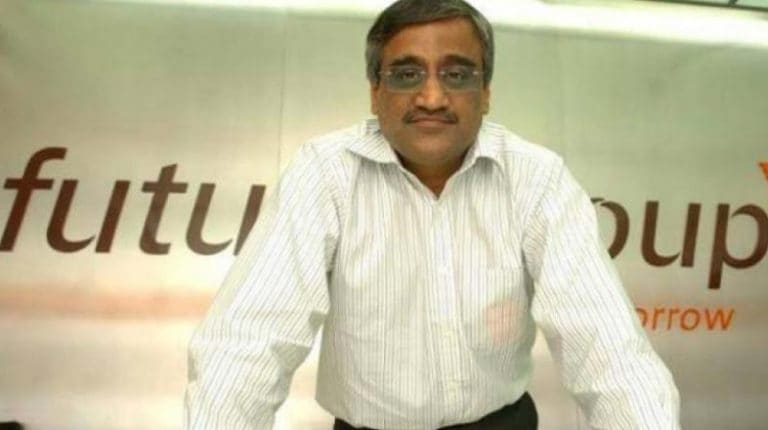 Kishore Biyani-led Future Group is looking at several debt relief measures to combat the impact of the COVID-19 lockdown which has added to its debt woes after its falling share prices had put the company under repayment pressure.Get latest Finance online at cnbctv18.com

Bajaj Auto MD Rajiv Bajaj today criticised the ongoing coronavirus lockdown as a "solution looking for a problem" and dubbed it arbitrary and not a long-term solution to a health crisis.

Speaking to CNBC-TV18 on the difficulties faced by the auto industry, Bajaj said there was no point in restarting plants because people couldn't buy vehicles.

Bajaj termed the lockdown as a "draconian measure", which needed to be revoked. "The young and healthy need to go back to work. This lockdown is arbitrary and not an answer to the economic crisis," he said. Read more details about this story here

. @RBI advises banks to extend 2% interest subvention (IS) & 3% prompt repayment incentive (PRI) on short-term crop loans up to Rs 3 lakh per farmer till May 31. It would be applicable to loans that are due between March 1-May 31, 2020 pic.twitter.com/hZCHYLFUnM

ACC falls 3% after Morgan Stanley remains bearish on the stock

The cement manufacturer ACC slipped 3 percent after Morgan Stanley maintained an 'underweight' rating on the stock.

The brokerage believes the share price of the company will fall over the next 60 days. It further says to expect operating profit to decline by 40 percent in CY20.

"Assume a sharp volume decline in CY20 and a gradual recovery from 2021. We see a potential derating in the near term", the report added.

European markets are set to open lower Tuesday as investor concerns over the coronavirus outbreak continue and oil market volatility remains in focus.

Investors in Europe remain focused on coronavirus developments as economies in the region tentatively start to lift lockdowns, but oil markets have come into sharp focus after dramatic moves in the oil price as the virus continues to dent demand worsening a supply glut.

Sources say India’s strategic #crude reserve capacity at 5.33 MT of which 56% utilized; expect to fill up strategic reserves by 100% by mid of May pic.twitter.com/A5NYv6NHkU

Shares of energy companies ONGC and GAIL shed up to 9 percent on Tuesday after the historic crash in the US crude oil spooked investors.

The price of a barrel of benchmark US oil plunged over 300 percent to settle at -$37.63, a troubling sign of an unprecedented global energy glut as the coronavirus pandemic affected economic activity. However, it later rebounded on Tuesday, with the US crude turning positive.

ONGC shares fell as much as 8.6 percent to its intra-day low of Rs 67.6 per share on the BSE, while Reliance Industries lost 4.3 percent to Rs 1,190 per share. GAIL also lost over 4 percent in early trade. Click here to read more

UBS has carried out a review of several financial stocks, downgrading its rating in several cases and cutting most steeply in the case of Bajaj Finance. In a note, the research firm said loan growth and asset quality of the financial system will be affected as the economic recovery in the services sector is expected to remain gradual and the lockdown is also likely to remain longer than May 3. The moratorium relief will also play a role in the loss of loan discipline for banks, it said.

Shares of Bajaj Finance fell 8 percent to Rs 2,126 per share on Tuesday after global brokerage firm UBS downgraded Bajaj Finance to 'sell' with a price target slashed to Rs 1,600 from Rs 4,600 earlier. The brokerage said it has cut the stock's EPS estimates by 11-65 percent for FY21-22. In a note, the research firm said loan growth and asset quality of the financial system will be affected as the economic recovery in the services sector is expected to remain gradual and the lockdown is also likely to remain longer than May 3. The moratorium relief will also play a role in the loss of loan discipline for banks, it said.

Aurobindo Pharma's shares climbed over 17 percent to Rs 633 on the NSE after the drug regulator US FDA classified the company's Unit IV of Hyderabad plant as VAI (voluntary action indicated). Ever since the national lockdown, the stock has been trading in an upward momentum. In fact, since March 24, the stock has soared 100 percent to its current levels. 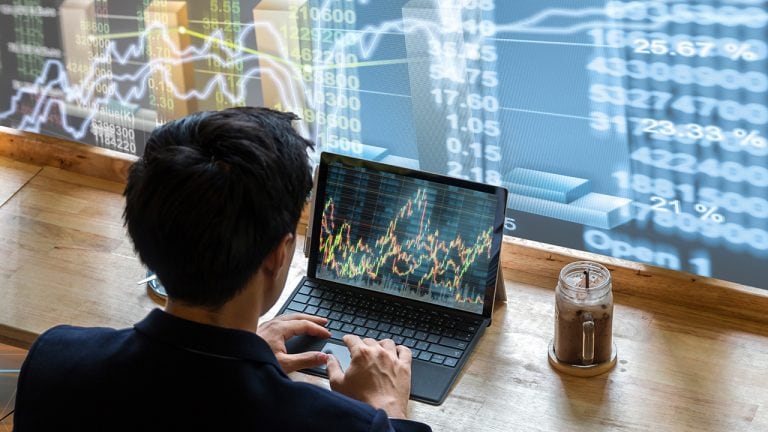 Shares of information technology (IT) companies were under pressure, falling by up to 6 per cent on the National Stock Exchange (NSE) in early morning deals on Tuesday, after US President Donald Trump announced a temporary suspension of immigration into the country. Tata Consultancy Services (TCS), Infosys, Tech Mahindra, Wipro, HCL Technologies, Hexaware Technologies, NIIT Technologies and Mindtree were down 1 percent to 5 percent on the NSE in intra-day trade. “In light of the attack from the Invisible Enemy, as well as the need to protect the jobs of our GREAT American Citizens, I will be signing an Executive Order to temporarily suspend immigration into the United States!,” the US President wrote in a Twitter post.

Shares of ICICI Bank, extended losses, tumbling nearly 7 percent to Rs 337.25 on the BSE on Tuesday after reports suggested the bank has exposure to Ocean Tankers, a unit of Singapore oil-trading firm Hin Leong Trading (HLT), that has filed for bankruptcy in Singapore. The firm owes nearly $100 million - or nearly Rs 760 crore - to the lender. The Mumbai based bank has lent $100 million to the company, out of which $75 million is secured through investory, said a report by Reuters.

Explained: What is WTI crude and why is it falling faster than Brent crude? The share price of Morepen Labs hit the upper circuit at Rs 16 after the company received the license to manufacture Hydroxychloroquine (HCQ) from the State Drug Controller in Himachal Pradesh. The company is also engaged in manufacturing sanitisers, infrared thermometers, hand wash and face masks.

Infosys fell as much as 4% after suspending FY21 guidance

The shares of the IT bellweather slipped nearly 4 percent after the company reported a drop of 1.4 percent in its revenue in US dollar terms to $3,197 million while net profit fell 3 percent to Rs 4,335 crore. Infosys suspended to provide guidance for FY21 citing uncertainty over the impact of COVID-19 and the related lockdowns across the world. Read the full earnings analysis here

Aurobindo Pharma surges 10 percent after company's Unit-IV is classified as Voluntary Action Indicated by USFDA. VAI is less severe than OAI, US FDA might not re-inspect the unit.

What is a negative crude future and does it mean anything for consumers?

The price of a barrel of benchmark U.S. oil plunged below $0 a barrel on Monday for the first time in history, a troubling sign of an unprecedented global energy glut as the coronavirus pandemic halts travel and curbs economic activity. Supply of fuel has been far above demand since the coronavirus forced billions of people to stop traveling.

Because of oversupply, storage tanks for WTI are becoming so full it is difficult to find space. The U.S. Energy Information Administration said last week that storage at Cushing, Oklahoma, the heart of the U.S. pipeline network, was about 72 percent full as of April 10. The crash in crude futures prices at Cushing won’t necessarily translate into a crash in prices at the gas pump, said Tom Kloza, a veteran analyst with Oil Price Information Services.

Bajaj Finance declines 7 percent on Tuesday, amongst top Nifty losers in the opening hour after UBS downgrades the stock to Sell with target being cut to Rs 1,600 per share.