The Indian domestic market ended with best monthly gains since 2019. The market gained for the fourth straight session on Thursday tracking gains in Asian peers after US Fed pledged to shore up the economy and on positive developments overnight on a potential new treatment for COVID-19.  The gains were mainly led by private banks, auto and metal stocks.

Closing Bell: The Indian domestic market ended with best monthly gains since 2019. The S&P BSE Sensex closed 997 points or 3.05 percent higher to 33,718 while the Nift50 index ended at 9,860, up 306 points or 3.21 percent. Tata Motors, UPL, ONGC, Vedanta and Hindalco were the Nifty50 top gainers while Sun Pharma, Hindustan Unilever, Cipla, IndusInd Bank and ITC remained the top losers. The gains were mainly led by private banks, auto and metal stocks. Except pharma all other sectoral indices ended higher. BSE Midcap and Smallcap indices rose over 1 percent each.

Cadila Health signs agreement to divest stake: The company has signed the definitive agreement for sale of 2,31,33,717 equity shares of Rs 10 each fully paid‐up, representing 49 percent of the total paid‐up share capital  of Windlas Healthcare  Private Limited to Windlas Biotech Private Limited. The stock traded nearly one percent lower to Rs 324 on the NSE, at 3:20 pm. The Serum Institute of India said on Tuesday it plans this year to produce up to 60 million doses of a potential vaccine against the new coronavirus that is under clinical trial in Britain.

RBI extends truncated market hours: The amended trading hours i.e., from 10.00 am to 2.00 pm for RBI-regulated markets that were effective till the close of business on Thursday April 30, 2020 shall be extended till further notice. Market trading timings will be reviewed on issuance of directions pertaining to lockdown from the Government.

Rupee Update: Indian rupee has ended higher by 57 paise at 75.10 per dollar, amid strong buying seen in the domestic equity market. It opened 51 paise higher at 75.16 per dollar against previous close of 75.67. The dollar nursed losses on Thursday after the US Federal Reserve left the door open to more monetary easing and dampened expectations for a quick economic recovery from the coronavirus pandemic.

Demand in-line with expectations as the farming season is normal across the globe. pic.twitter.com/pvFQbuBjdn

RBI sweetens the deal for banks to lend to mutual funds The Reserve Bank of India (RBI) on Thursday extended regulatory benefits under special liquidity facility for mutual funds (SLF-MF) scheme to all banks irrespective of whether they avail funding from the Reserve Bank or deploy their own resources.Get latest Finance online at cnbctv18.com

The stock soared upto 9 percent to Rs 425 per share on the NSE.

Trending Stock: Glenmark Pharmaceuticals receives approval from the DCGI (Drug Controller General of India), the regulator in India to conduct clinical trials on Favipiravir Antiviral tablets on COVID-19 patients. The stock is up 4% to Rs 343 on NSE. 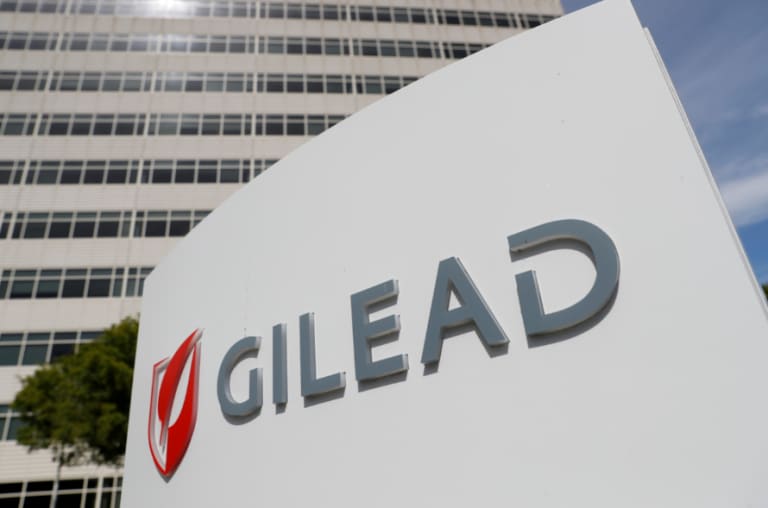 Difficult to give a timeline on human trials for COVID vaccine. Developing a vaccine generally takes a few years; no one can provide a firm timeline on vaccines, says Rajiv Gandhi of Hester Biosciences #OnCNBCTV18 pic.twitter.com/Qt4yRptrVQ

Factory activity in China expanded for a second straight month in April as more businesses resumed work from the coronavirus-led shutdowns, but a worsening slump in export orders pointed to a long road to recovery for the embattled economy.

China's official Purchasing Managers' Index (PMI) eased to 50.8 in April from 52 in March, China's National Bureau of Statistics said on Thursday, but stayed above the neutral 50-point mark that separates growth from contraction on a monthly basis.

Analysts polled by Reuters had expected a PMI reading of 51. Click here to read more

Tata Motors' share price rose for the third day in a row on Thursday after a Mint report said that Jaguar Land Rover (JLR) has restored three-fourth of its budgeted production in China.

The company spokesperson told Mint that with lockdown measures easing in China, all of its retailers are now open and sales are recovering. JLR has restored its production capacity to 75 percent of pre-COVID levels, added LiveMint. Read more on this story here

Supreme Court refuses to interfere with @RBI's moratorium circular. Apex court observes, it appears that benefits extended by RBI are not being passed on. proper guidelines for enforcement of circular should be in place & RBI may examine implementation of the moratorium circular pic.twitter.com/dRAPY1SNaH

Share price of Motherson Sumi Systems jumped 9 percent in the morning trade on April 30 after global research firm Morgan Stanley maintained its overweight call on the stock with a target at Rs 103 per share. It expects a sharp earnings recovery in FY22 as volumes normalise, according to a report. The stock price has surged over 46 percent in the last one month. Riding once again on its Azure Cloud business, Microsoft reported $35 billion in sales – up 15 percent year-on-year – in its third quarter of 2020, with net income at $10.8 billion (up 22 percent). The company saw tremendous growth in the productivity and business processes and Intelligent Cloud segments as cloud usage increased, particularly in Microsoft 365 including Teams, as customers shifted to work and learn from home. It, however, admitted that in the final weeks of the quarter, there was a slowdown in transactional licensing, particularly in small and medium businesses, and a reduction in advertising spend in LinkedIn.

SoftBank Group Corp said it sees a loss of around 700 billion yen ($6.6 billion) in the year ending March on the portion of its WeWork investment held outside the Vision Fund, extending the group's expected net loss to 900 billion yen. SoftBank maintained its forecast of a record annual operating loss of 1.35 trillion yen announced earlier this month as bets via the $100 billion fund sour. SoftBank is embroiled in a legal dispute with directors at WeWork after backing out of a $3 billion tender offer agreed when it bailed out the office-sharing firm following a flopped IPO attempt last year.

Shares of automobile companies rallied on Thursday, led by Tata Motors which surged as much as 15 per cent on the NSE. The Nifty Auto index gained 5.1 per cent and was the top sectoral gainer. In comparison, the Nifty50 index was up 2.9 percent. Among individual stocks, Tata Motors surged 14.77 percent to Rs 89.70 in the biggest one-day gain for the stock in six months after reports said that Jaguar Land Rover had restored three-fourth of its budgeted production in China. 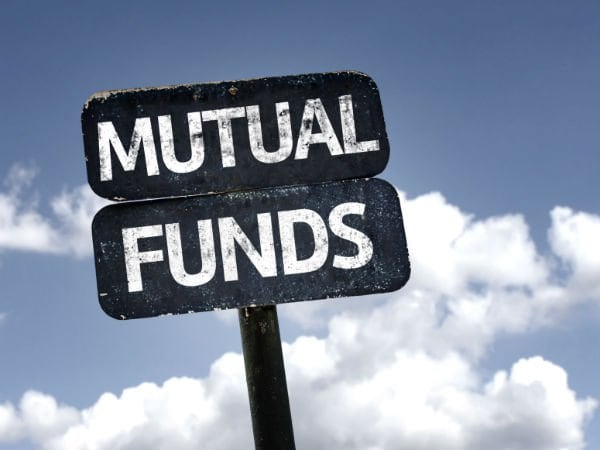 Hexaware Technologies reported a decent March quarterly earnings on Wednesday. The company reported a rise of 4.27 percent year-on-year (YoY) in consolidated net profit to Rs 175 crore, and a 0.85 percent increase in revenue from operations to Rs 1,542 crore in the quarter ended March 31.  The company has suspended the guidance that was provided earlier for FY2020, as COVID-19 has led to significant uncertainty in the current environment. At 10:22 am, the company's shares traded 3.70 percent lower at Rs 285 on the NSE.

Lupin on Thursday announced the receipt of the Establishment Inspection Report (EIR) from the United States Food and Drug Administration (USFDA) for its Pithampur Unit-1 facility. The inspection for the facility was conducted by the USFDA between February 3 and 11 and was concluded with two observations.

Glenmark Pharma has received approval from the regulator Drug Controller General of India (DGCI) to conduct clinical trials on Favipiravir Antiviral tablets for COVID-19 patients. The stock surged nearly 9 percent to Rs 359 post the announcement. Last week, sources told CNBC-TV18 that the company may become the first Indian company to develop active pharmaceutical ingredients (API) for the anti-viral drug, Favipiravir. Since then the stock has rallied 13 percent. 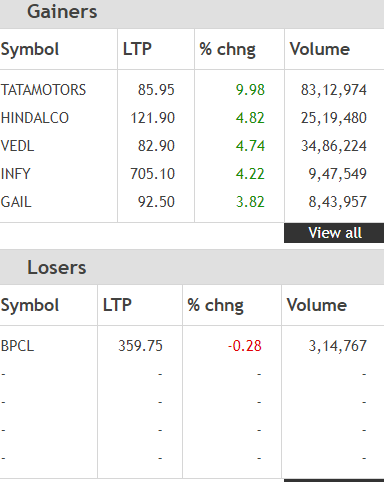 Indian markets gained for the fourth straight session on Thursday tracking gains in Asian peers after US Fed pledged to shore up the economy and on positive developments overnight on a potential new treatment for COVID-19. At 9:18 am, the BSE Sensex was trading 645 points higher at 33,365, while the Nifty was up 200 points at 9,753. The gains were mainly led by banking and IT stocks. ICICI Bank, HDFC Bank, HDFC, Infosys, and TCS were some of the top index contributors at opening trade.