Sensex ended at record closing high and Nifty above 11,700 for the first time since August 2018 on Tuesday led by realty and auto stocks, as investors turned their focus to the RBI's monetary policy decision later this week. Tata Motors, Bharti Airtel, Eicher Motors, Bajaj Finance, and GAIL were the top gainers on Nifty while Zee, BPCL, Bajaj Auto, Britannia, and Sun Pharma were the top laggards on the index.

Sensex ended at record closing high and Nifty closed above 11,700 for the first time since August 2018 led by realty and auto stocks, as investors turned their focus to RBI's monetary policy decision later this week. The sentiment was also boosted by gains in broader Asia supported by strong global cues.

Tata Motors, Bharti Airtel, Eicher Motors, Bajaj Finance, and GAIL were the top gainers on Nifty while Zee, BPCL, Bajaj Auto, Britannia, and Sun Pharma were the top laggards on the index. The Nifty Metal index rallied for over 2 percent, led by gains in Godrej Properties, Prestige Estate, Oberoi Realty and DLF, up in the range of 2-10 percent.  Nifty’s auto index also rose 1 percent, lifted mainly by Tata Motors, up 8.5 percent. 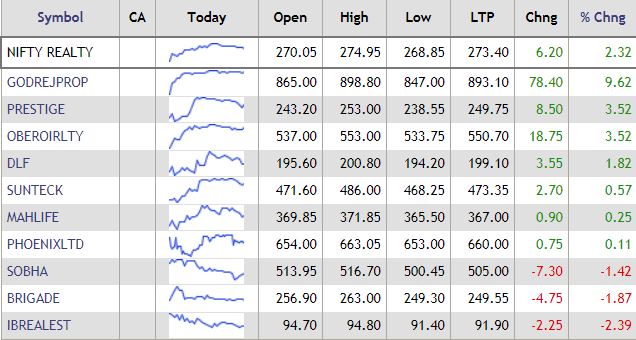 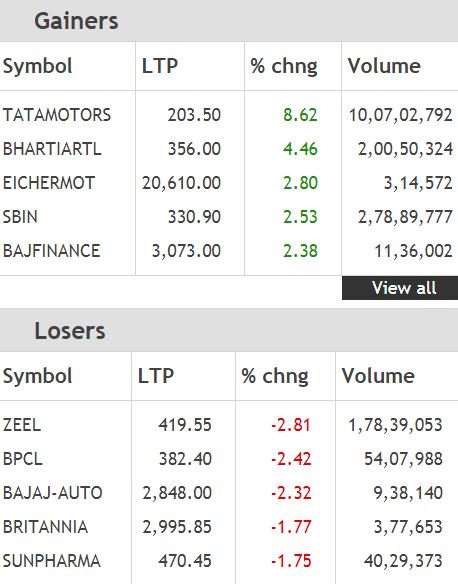 SC strikes down RBI's February 12 circular: Here's what experts have to say

“The fact is that we are extremely happy that we took up this initiative as IPPAI and filed this petition which has ultimately led to this decision. I think I am very grateful to the court and to the government of India who has supported the systemic problem that is there and has taken it up very seriously."

Reacting on the judgement, Vakil said, “It’s a big setback to the IBC process. This was the key one, together with the last one which held the code itself to be constitutional and we certainly expected this one to also say the same. It was all set for the IBC to play the very healthy and effective role it was playing. I think now this will be a big setback, there is no question about that.”

Base effect hits March vehicle sales, YoY off-take up Even as the base effect and consumer caution ahead of the general elections dampened March sales of some vehicles, the year-on-year (YoY) off-take remained positive. On Monday, automobile major Maruti Suzuki India reported a marginal 1.6 percent slip in sales, including exports, for March to 158,076 units from 160,598 units in the year-ago period. "The company ended 2018-19 with its highest ever total sales of 1,862,449 units -- a growth of 4.7 percent. It comprises the highest domestic sales of 1,753,700 units. The export sales were 108,749 units," the company said in a statement. READ MORE
Share:

Shares of Bharat Road Network rallied 20 percent to Rs 112.20 per share after the company’s arm received an arbitration award of Rs 322.77 crore against the National Highways Authority of India (NHAI) for a project in Odisha.

Orissa Steel Expressway Private Limited (OSEPL), one of the subsidiaries of the company, won the arbitration award after NHAI failed to hand over the land required for the project. READ MORE The Nikkei Manufacturing Purchasing Managers' Index, compiled by HIS Markit, fell to a six-month low of 52.6 in March from February's 54.3, below a Reuters poll forecast of 53.9 but above the 50-mark separating growth from contraction for the 20th straight month.Get latest Economy online at cnbctv18.com

Credit growth likely to be at 14-15% in FY20, says Bank of Baroda PS Jayakumar, MD and CEO of Bank of Baroda (BoB), spoke to CNBC-TV18 about what the capital adequacy after its integration with Dena and Vijaya Bank.

HSBC bets big on Biocon, expects biosimilar sales to rise in US, EU markets HSBC Global Research has maintained a 'buy' rating on Biocon, with a price target of Rs 800 per share, saying the company's sales in US and European markets will rise. The brokerage noted that Fulphila was launched in the US by partner Mylan and is now tracking in-line with expectations for market share gain. Fulphila has ~16 percent market share in the US, and Biocon is confident of achieving 25-30 percent market share in the next two years, according to the report. READ MORE
Share:

In February 28, 2019, in the matter of SEBI v. Bhavesh Pabari, the Supreme Court finally settled the question of the interplay between two sections of the SEBI Act previously raised in the Roofit and Siddharth Chaturvedi cases, also apex court rulings. These discuss the powers of a SEBI judicial authority (adjudicating officer) to consider mitigating factors while discussing the amount of penalty to be imposed by such authority.

Prior to the amendment to the SEBI Act in 2014, the relevant portion dealing with imposition of penalty in Section 15A of the SEBI Act, which provides for imposition of penalty for failure to furnish information, provides that a penalty “of one lakh rupees for each day during which such failure continues or one crore rupees, whichever is less” shall be imposed. READ MORE
Share:

Asia shares extended their rally on Tuesday as positive Chinese and US factory activity surveys aided investor confidence, and the ebbing concerns over the global economy spurred selling of safe-haven US bonds as yields rose from 15 month troughs.

MSCI’s broadest index of Asia-Pacific shares outside Japan was up 0.2 percent, hitting a seven-month high after rallying more than one percent in the previous session. Australian shares gained half a percent and Japan’s Nikkei advanced 0.3 percent, extending its gains for a third session. The Shanghai Composite Index climbed 0.1 percent while Hong Kong’s Hang Seng Index was flat.
Share:

The new swap auction tool is meant to provide the central bank greater flexibility in managing banking system cash, while helping soak up any potential large dollar inflows that could make the rupee rise sharply.

This comes shortly after the RBI said last month it will conduct a dollar-rupee buy-sell swap auction of $5 billion for a tenure of three years on March 26, the first such market sale by the central bank to mop up dollars and pump in rupees. READ MORE

What was the February 12 circular all about in the first place?

The circular directed banks to refer all cases of stressed loans over Rs 2000 cr, if resolution was not found in 180 days

Here's a little synopsis of the impact of SC's decision to trike down the circular pic.twitter.com/5XVveakWBt

Ratnesh Kumar, MD & CEO of BoB Capital Markets, spoke to CNBC-TV18 about the fundamentals of the market.

Dasari will also join the board of Eicher Motors as an executive director with immediate effect, the company said in a regulatory filing. At Royal Enfield, Siddhartha will continue to support Vinod and the team on product and brand related areas. READ MORE

The judgment was pronounced by a two-judge-bench Of the top court, headed by Justice Nariman. Ultra Vires means when a body or an individual is acting beyond its legal power or authority. READ MORE

The Supreme Court of India has declared the Reserve Bank of India’s February 12 circular as unconstitutional. A two-judge Bench of Justice Rohinton Fali Nariman and Justice Vineet Saran had heard the companies’ who had moved the apex court against the circular.

The banking sector regulator in this circular had allowed 180 days for debt resolution, failing which the asset would have to be taken to National Company Law Tribunal (NCLT) for initiation of insolvency against them. The deadline got over on August 31, 2018.
Share:

The government has been able to contain its fiscal deficit around 3.4 percent of the GDP in 2018-2019 by resorting to withdrawals/cash support from public accounts and savings on expenditure, sources told CNBC-TV18. The government may have lowered its overall expenditure by more than 1 lakh crore with a combination of off-budget support from public accounts and expenditure savings in FY19, added, the sources, who did not want to be named.

According to the sources, the government may have provided out of budget support to FCI by allowing the corporation to borrow Rs 65,000 crore from small savings which fall under public accounts. This expenditure management may help the government in projecting a lower food subsidy by a matching amount for the fiscal ended. READ MORE
Share:

RBI to cut rates again before vote; BJP victory best for economy: Reuters poll The Reserve Bank of India will cut rates for a second consecutive time when its three-day policy meeting ends on Thursday, shortly before the first phase of the national election begins, a Reuters poll found. Those expectations for another rate cut have strengthened over the past month after Shaktikanta Das was appointed as the new RBI Governor in December. Lending rates were lowered and the policy stance shifted at his first meeting in February.

While the central bank justified that move by highlighting a lower inflation outlook and a slowdown in growth, not everyone was convinced those were the only reasons behind the policy easing. READ MORE

It was a mixed bag for auto sales in March 2019. Passenger volumes remained weak for another month with no signs of broad-based recovery yet from the impact of higher fuel prices and increase in the financing cost. Meanwhile, commercial volumes declined 0.5 percent YoY despite growth in light commercial vehicle (LCV). Tractor volumes declined 21.5 percent YoY led by a high base and muted farm sentiment. READ MORE

Top Nifty gainers and losers at opening: Eicher Motors up 3%, Zee down 2.5% At 9:20 am, the Sensex was trading at 38,932, up 59 points, meanwhile, the broader Nifty rose 17 points to 11,686. The Nifty Midcap index gained 0.3 percent, while Nifty Smallcap index rose 0.4 percent. Eicher Motors, ONGC, Coal India, JSW Steel and Bharti Airtel were the top gainers on Nifty while Zee, BPCL, IOC, HCL Tech and Kotak Bank were the top laggards on the index.

- LCVs have likely grown this month but the pace has moderated

- While tractors disappointed overall, Escorts was relatively better than M&M

Citi on IT Sector

- Remain selective on Indian IT given challenges to profitable growth

- For Infosys, we expect a decent Q4 on revenue

- Infosys margin likely to be at the lower end of guidance

- For TCS, Q4 may be decent, commentary on outlook will be watched