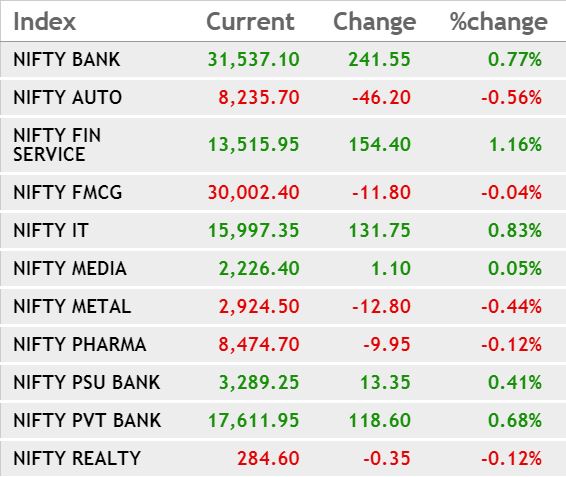 Top Nifty gainers and losers for the day 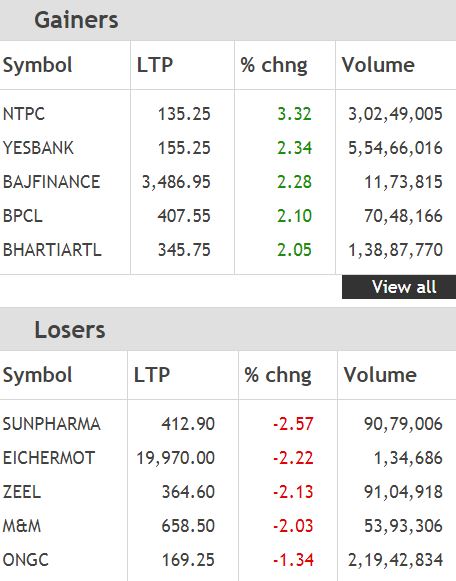 Indian shares ended expiry day on record closing high on Thursday, led by gains in IT and banking stocks as investors awaited appointments for key ministries at Prime Minister Narendra Modi’s swearing-in ceremony.  The Sensex settled 330 points higher at record closing high of 39,832, while the Nifty50 added 85 points to end at fresh closing high of 11,946. In broader markets, Nifty Midcap gained 0.8 percent, while, Nifty Smallcap was up 0.5 percent. NTPC, YES Bank, Bharti Airtel, TCS and Bajaj Finance were among the major gainers on the Nifty50, whereas Sun Pharma, Eicher Motors, Zee Entertainment, M&M, and ONGC led the losses. Sectoral indices were trading mixed during the day with Nifty Fin Services gaining the most, up 1.2 percent followed by Nifty IT (up 0.9 percent), and Nifty Bank (up 0.8 percent). Meanwhile, Nifty Metal and Nifty Auto fell 0.3 percent and 0.7 percent, respectively. Benchmark indices are trading at near record high level this month after Narendra Modi-led BJP got a big mandate in the 2019 Lok Sabha Elections.

Natco Pharma reaches Settlement Agreement with Onyx Therapeutics on patent litigation related to generic versions Kyprolis; company has partnered with Breckenridge Pharmaceutical to market the product in US

Vaibhav Global approved a proposal to buyback its own fully paid-up equity shares of face value of Rs 10 from the equity shareholders of the company for a price not exceeding Rs 1,000 per equity share. Most global brokerages, including CLSA, Jefferies, Citi, and HSBC remained bullish on the stock despite weak earnings.

Weakness in growth is the biggest challenge for the new government, says HSBC India

Hitendra Dave, head of global banking and markets, HSBC India, shared his views on the new government's priorities should be when it comes to the financial sector. “Base case looks like 6 percent with a possible downside risk there because all the indicators for that quarter across the number of sectors have indicated a significant contraction in demand vis-à-vis the year ago numbers," he said.

"So it certainly looks like the full year projections will have to be scaled down for the previous year and if the current fiscal year we have entered with that sort of momentum — even the current projection of 7.2 or so for this fiscal year — you would have to say that if the momentum is slow unless there is a significant U-turn, which people have experienced either in April or in May or immediately then even that potentially could be looked for the review on the downwards. The weakness in the growth is the biggest policy challenge in front of all policymakers,” he added. READ MORE

India's Gross Domestic Product (GDP) growth during the fiscal 2018-19 is expected to be 6.9 percent, lower than Central Statistics Office's (CSO) advance estimate of 7 percent, a CNBC-TV18 poll showed. The GDP growth was 7.2 percent during 2017-18. The growth could come at 6.3 percent for the January-March period, it said. The CSO will be releasing the quarterly GDP estimate for the quarter January-March (Q4FY19), 2019 and provisional annual estimates for 2018-19 on May 31. READ MORE

M&M fell nearly 2 percent on Tuesday after CLSA downgraded the stock to 'underperform' from buy and cut it's target price to rs 690 per share from Rs 850 earlier. CLSA said M&M's operational outlook has deteriorated, led by weakening tractor industry demand and a sharp fall in legacy SUV volumes eating into the benefit of new launches. Its higher exposure to diesel also makes it more vulnerable to upcoming emission norms.

Oil prices rose after a bigger-than-expected decline in US crude inventories, although concerns that the US-China trade war will trigger an economic downturn kept a lid on gains. 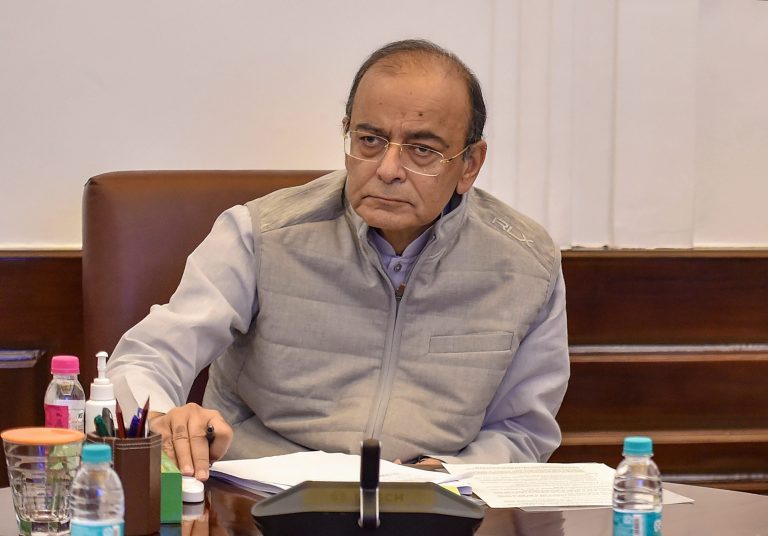 Jahangir Aziz, head of emerging market economics, JPMorgan, shares his views on the repercussions of the ongoing trade war between the United States and China, market's reaction to a new finance minister as Arun Jaitley steps aside, and the possible outcome of the upcoming Reserve Bank of India (RBI) monetary policy meeting.Get latest Economy online at cnbctv18.com

Shares of Manpasand Beverages plummeted 10 percent, hitting another 52-week low, after the officials of the company arrested for GST fraud were reportedly denied bail.

#4QWithCNBCTV18 | Ujjivan to release its Q4 earnings today, here are the key things to watch out for pic.twitter.com/cmPVWLV9dZ

Shares of West Coast Paper Mills (WCPM) surged 13 percent on Thursday after the company agrees to buy a majority stake in International Paper APPM. Rajendra Jain, executive director and CFO of West Coast Paper told CNBC-TV18, “On Wednesday, we have signed a share purchase agreement with International Paper. We will be acquiring a minimum 51 percent and a maximum 60 percent share at Rs 275 per share aggregating to Rs 557 crore. We will be going for a public open offer.” READ MORE

ONGC Q4 results: Revenue likely to fall by around 10% Oil and Natural Gas Corporation (ONGC) is expected to release its fourth-quarter earnings on Thursday and analysts expect the company report weak numbers. Here are the key things to watch out for: > The company's revenue is expected to decline by around 10 percent to Rs 25,000 crore.

> EBITDA is expected to decline by 22 percent

> Operating profit margins are expected to see a big hit coming in at 51.5 percent versus 60 percent earlier

> Profit after tax (PAT) is also expected to decline by 24 percent. 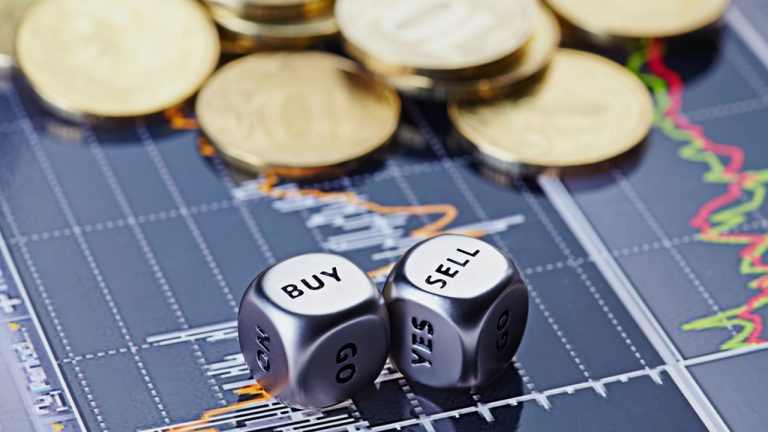 Reserve Bank of India (RBI) on Wednesday constituted a committee to review the existing state of mortgage securitisation in India and suggest measures to deepen it. The mortgage securitisation market in India is primarily dominated by direct assignments among a limited set of market participants on account of various structural factors impacting both the demand and the supply side, as well as certain prudential, legal, tax and accounting issues. READ MORE

Among stocks, Sudarshan Sukhani has a 'buy' call on Titan Company, BPCL, and Britannia Industries, and 'sell' call on Tata Elxsi and Hindustan Zinc.

The Indian benchmark indices opened marginally higher on Thursday, amid negative global sentiment, ahead of May F&O Expiry. Gains were capped as investors also awaited Q4 GDP data due on Friday. Asian stocks tracked Wall Street losses as rhetoric from Beijing and Washington over trade matters kept investor concerns alive.  At 9:20 am, the Sensex was up 81 points at 39,583, and the Nifty50 was trading 24 points higher at 11,885. Bajaj Auto, BPCL, Asian Paints, NTPC, and Bhati Airtel were the top gainers on Nifty50 index, while Hindalco, M&M, Vedanta, Grasim, and ONGC led the losses. Sectoral indices were trading mixed in the morning deals. Nifty Realty gained the most, up 0.5 percent followed by Nifty IT (up 0.4 percent) and Nifty Pharma (up 0.3 percent). Meanwhile, Nifty Metal and Nifty Auto fell 0.3 percent and 0.2 percent, respectively.