Nifty ended April F&O expiry below 11,650, dragged by banking, metal and auto stocks, as Brent crude prices rose above $75 per barrel for the first time in 2019.

Sectoral Trend: All indices except Nifty Realty ended in red 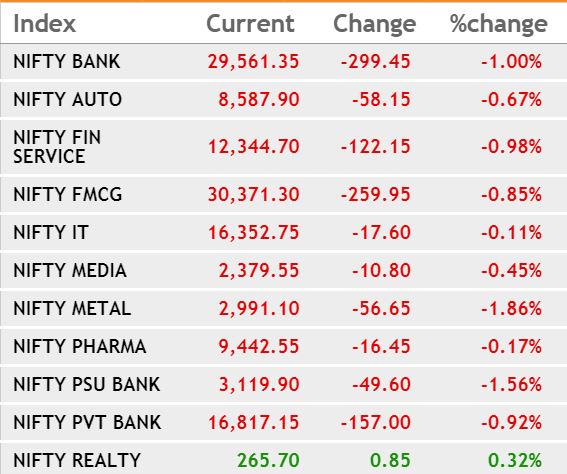 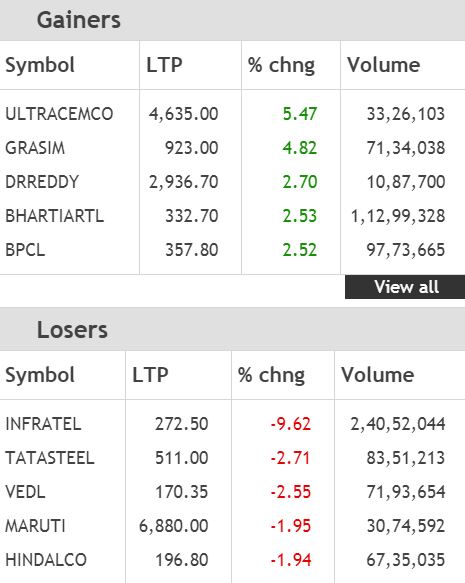 Benchmark indices ended lower on the expiry day, dragged by index heavyweights like RIL, HDFC twins, ICICI Bank, among others, as Brent crude prices rose above $75 per barrel for the first time in 2019. Negative sentiment in the global markets also affected the indices. The BSE Sensex settled at 38,731, down 324 points, while the broader NSE Nifty50 was at 11,642, falling 84 points. Among broader markets, Nifty Midcap indec fell 0.4% and Nifty Smallcap index was flat. Grasim, Ultratech Cement, BPCL, Dr Reddy's and Bharti Airtel were the top gainers on the Nifty, while, Bharti Infratel, Tata Steel, Vedanta, Maruti and Hindalco fell the most on the index.  All sectoral indices, except Nifty Realty ended the day in red. Nifty Metal fell the most followed by banking indices, which fell over 1 percent each. Nifty FMCG and Nifty Auto also slipped during the day.

Here's why fund manager Pankaj Tibrewal of Kotak Mahindra AMC is positive on cement stocks Pankaj Tibrewal, senior VP & fund manager at Kotak Mahindra AMC, shared his views on the fundamentals of the market. Tibrewal is positive on the cement sector. “Our broad thesis remains that over the next three to four years, supply will lack demand which has not been the case for the last five years. In our estimation, even if demand grows by 6-7 percent over the next couple of years, supply will grow at not more than 3-4 percent and that means higher capacity utilization and pricing power in the hands of manufacturers,” Tibrewal told CNBC-TV18 on Thursday. READ MORE
Share:

Zydus Cadila has received the final approval from the USFDA to market Leflunomide Tablets USP (US RLD — Arava Tablets), 10 mg and 20 mg, Cadila Healthcare said in its BSE filing. It will be manufactured at the group’s formulations manufacturing facility at Baddi. This medication is used to treat rheumatoid arthritis, a condition affecting multiple small and large joints of the body.

“Last two quarters were one of consolidation and risk management. The sector and the overall system was going through a lot of pain and we chose to be conservative up until about the middle of last quarter and since then we have been growing our book again. Liquidity of the company is very solid at over Rs 30,000 crore and that is way above what is normally required for the business. So where we are today, the ALM is extremely strong, the cash buffers are extremely strong and therefore we are fairly optimistic about the future,” Banga said on Thursday. READ MORE
Share: 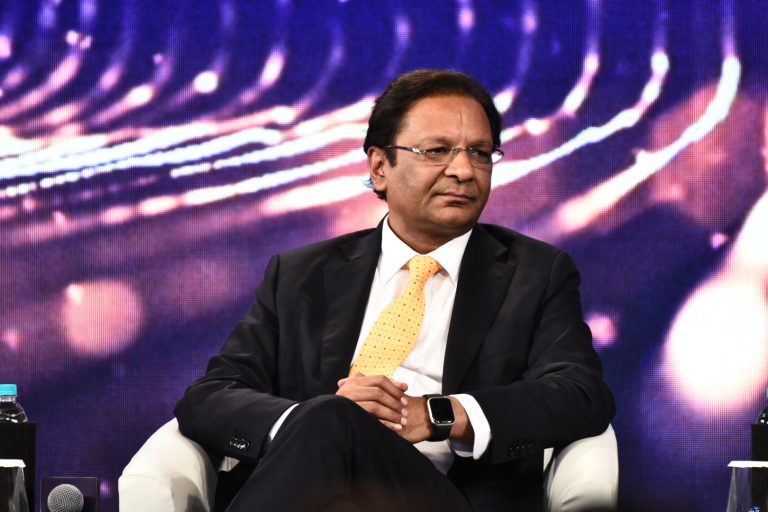 Kingfisher Airlines and Jet Airways' suspension of operations should serve as a warning and make us rethink policies towards the country's aviation sector, said SpiceJet chairman Ajay Singh.Get latest Aviation online at cnbctv18.com

Brent crude oil on Thursday rose above $75 per barrel for the first time in 2019 in the wake of tightening sanctions on Iran, while gains in US prices were crimped by a surge in US supply. Brent crude futures rose to a 2019 high of $75.01 per barrel on Thursday and were at $74.90 per barrel at 0705 GMT, up 33 cents, or 0.4 percent, from their last close. US West Texas Intermediate (WTI) crude futures were at $65.94 per barrel, up 5 cents from their previous settlement. READ MORE

Brokerages bullish on Ultratech Cement post Q4 results; stock rises 10% in 2 days Brokerages remained bullish on Ultratech Cement after the company posted an over 100 percent rise year-over-year in its standalone net profit for the quarter ended March 31. The Aditya Birla group company posted a standalone net profit of Rs 1,017.47 crore in the fourth quarter of FY 2018-19, 108 percent up compared to Rs 487.95 crore in the same period last year. Extending yesterday's gain, Ultratech Cement shares gained 5 percent in intra-day deals on Thursday. It has gained over 10 percent since Wednesday after the company disclosed results.

Brokerages have "buy" ratings on the stock and have raised its target price for the stock. Strong recovery in the company's operating performance after a long time and consistent approach to trim down the cost further augured well, said analysts. READ MORE

Benchmark indices were off day's high in afternoon as Brent crude futures, the international benchmark for oil prices, reclaimed $75 a barrel. The BSE Sensex rose 42 points to 39,099 and the Nifty50 gained 24 points at 11,750. Biocon will be releasing its Q4FY18 numbers today and it will be closely watched. Here are its key expectations:Get latest Earnings online at cnbctv18.com

SpiceJet rose over 5 percent after CEO Ajay Singh in an interview with CNBC TV18 said that they will be hiring more professionals from Jet Airways, and are also discussing to induct 15 of their aircraft. Singh also revealed plans to add 40 more aircraft from the ailing carrier.

“We are also planning to get 40 Jet aircraft on-board. Boeing expects clearances for technical upgrades in May, and could possibly compensate SpiceJet for loss of business, however, no expected amount has been decided yet”, he said. READ MORE

"The company would like to clarify that based on preliminary information received the total applications from ASBA (applications supported by blocked amount) and non-ASBA have exceeded the total issue amount of Rs 25,000 crore," Vodafone Idea said in an exchange filing. The country's largest telecom operator through the rights issue, which ran between April 10 and April 24, offered 2,000 crore new shares at Rs 12.50 apiece. READ MORE 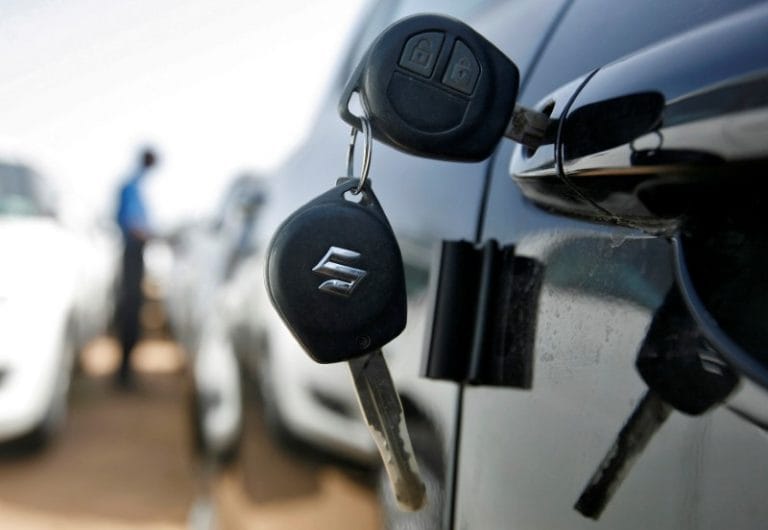 Maruti Suzuki India will report its fourth-quarter earnings on Thursday and analysts expect the country's top-selling carmaker to post a fall in net profit for the third straight quarter.Get latest Auto online at cnbctv18.com

Higher oil prices, strong dollar significant headwinds for India, says EM equity strategist Adrian Mowat The decent earnings growth outlook, positive economic data and capital inflows are expected to support the equity market rally, said emerging market equity strategist Adrian Mowat. He said there is an expectation of a melt-up in equity markets, where bond markets do not look like an attractive place to be in. However, there are some of the negative points that investors should keep an eye on. With regards to India, the oil market could prove to be tight in the summer months, he said. “The US is removing waivers on importing oil from Iran, also refineries are ramping up production ahead of the driving season,” he said, adding that DXY has rallied quite strongly. Watch interview here
Share:

Nokia reported a surprise quarterly loss on Thursday, citing hard competition in its core business, the networks unit. Having signalled back in January "a particularly weak Q1", Nokia reported a fall to an operating loss (non-IFRS) of 59 million euros ($66 million) from a profit of 239 million euros in the first quarter a year ago.

That compared with analysts' profit expectation of 305 million in a Reuters poll. The networks industry - dominated by Nokia, Sweden's Ericsson and China's Huawei - has been battered by years of slowing demand since 4G network sales peaked in the middle of the decade.

Tata Steel Q4 results today: What you should watch out for Tata Steel will report its fourth-quarter earnings on Thursday and analysts expect the country's diversified steelmaker to report a rise in sales.Get latest Earnings online at cnbctv18.com 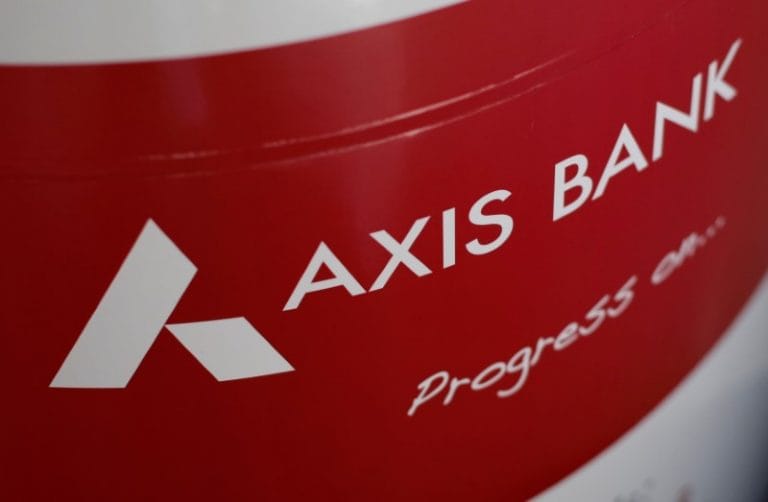 Updated : April 25, 2019 08:19 AM IST A CNBC-TV18 poll projects a net profit of Rs 1,500 crore versus a loss of Rs 2,200 crore reported in the same quarter last year Strong loan growth coupled with low-cost deposit share at 46 percent should boost the net interest income for Axis Bank

- Buy Rural Electrification Corporation with a stop loss at Rs 149, target at Rs 154

Benchmark indices open flat on Thursday, following subdued Asian peers, ahead of April F&O Expiry. Investors also remained cautious amid ongoing March-quarter earnings season. At 9:20 am, the BSE Sensex was trading at 39,025, down 29 points, while the broader NSE Nifty50 was ruling at 11,724, falling 3 points. Broader markets were also trading flat on the morning trade. Grasim, Ultratech Cement, PowerGrid, NTPC, and Hindalco were the top gainers on the Nifty, while, Bharti Infratel, Indiabulls Housing, Tata Motors, IOC and Adani Ports fell the most on the index.  Sectoral indices were trading mixed with banking indices slipping while Nifty Realty gained. Nifty Auto also fell 0.2 percent.