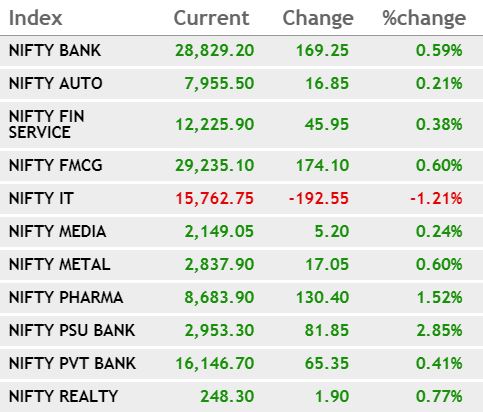 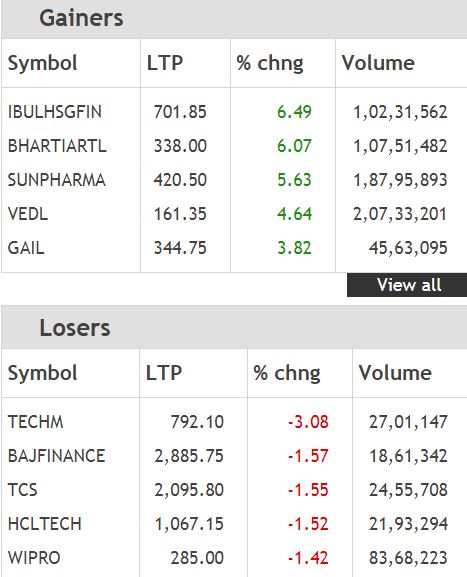 Indian Shares ended higher on Tuesday, snapping nine sessions of losses, led by gains in index heavyweights like Reliance Industries, ITC, ICICI Bank and HDFC. However, negative sentiment in the Asian peers capped the gains.  The Sensex settled 228 points higher at 37,318, while the Nifty50 added 74 points to end at 11,222. Among broader markets, Nifty Midcap and Nifty Smallcap were up 0.5 and 0.7 percent, respectively.  Bharti Airtel rose over 6 percent after CNBC-TV18 reported that the telecom operator has scrapped its postpaid plan of Rs 299 and made Rs 349/399 plans as minimum offers for postpaid. Indiabulls Housing Finance, Sun Pharma, Vedanta, and GAIL were the other top gainer on Nifty. Meanwhile, IT stocks like Tech Mahindra, Wipro, TCS, and HCL Tech were among the top losers on Nifty, down up to 3 percent. All sectoral indices, except Nifty IT, ended the day in green. Buying was seen in Nifty PSU Bank and Nifty Pharma indices, gaining 2.8 percent and 1.5 percent, respectively. Nifty FMCG and Nifty Bank also rose over half a percent each.

The selloff has made people think about the big scenario all over again, said Rohit Shrivastava, fund manager PMS at Sharekhan. However, in the short term, it does look like an oversold condition in the market, he said. “Ahead of the elections season, most people were anticipating that you would get some kind of upside and if that is to happen, 11,085 is the key support level that I am watching. If it holds, then you get some kind of a rally into the election results,” he said in an interview with CNBC-TV18. READ MORE

Crisil Ratings has downgraded commercial paper worth Rs 850 crore of Dewan Housing Finance Corporation (DHFL) driven by weak liquidity condition of the company. DHFL's commercial papers were downgraded to A4+ from A3+. Its rating also continues to be on 'Rating Watch with Negative Implications'. The mortgage lender's liquidity dropped to Rs 2,775 crore as of end-April.

"The downgrade is driven by a more-than-expected reduction in the company's liquidity because of further delays in fundraising from sell down of project finance loans and lower inflows from securitisation of non-housing loans," the agency said in a note last week. READ MORE

Indian benchmark indices fell for the ninth straight session on Tuesday in a longest losing streak in eight years following a selloff in global markets amid trade war fears. The Volatility Index (VIX) climbed 21 percent in May so far as uncertainty around Lok Sabha election results, March-quarter earnings and oil prices weighed on the market. In last one year, the index has escalated by 90 percent to current levels. And in one whole month, it has gone up about 28 percent. READ MORE

Shares of Vodafone Idea tumbled nearly 6 percent in intra-day trade on Tuesday after global brokerage firm CLSA maintained a 'sell' rating on the stock and cut its target to Rs 12.50 from Rs 27 per share post it's Q4 earnings. The telecom operator's consolidated loss narrowed sequentially to Rs 4,881.9 crore in Q4 from Rs 5,004.6 crore in Q3, aided by a 3.4 percent drop in total expenses. Strategic initiatives to improve revenue and average realisation from subscribers helped financials, the company said in a statement. READ MORE

Passenger vehicle (PV) sales in India dropped by 17.07 percent in April, the steepest fall since October 2011, as weak customer sentiment led by liquidity crunch, uncertainty revolving elections and high product prices hit sales. The domestic sales declined for a sixth straight month in April to 2,47,541 units against 2,98,504 units in the year-ago month. It is the worst dip in PV sales since October 2011 when sales had dropped by 19.87 percent. READ MORE

Sebi has issued show-cause notices to HDFC and Kotak Mahindra mutual fund houses seeking details about their investments in the debt instruments of Essel Group companies. In the wake of Essel Group companies grappling with debt woes, many mutual funds have come under redemption pressure. In April, HDFC AMC and Kotak Mahindra AMC sought more time for payouts with respect to their Fixed Maturity Plans (FMPs).

Sources said Sebi, which regulates mutual funds, has served show-cause notices to the two asset management companies (AMCs) regarding their dealings in shares of Essel group companies. HDFC AMC on Monday said it has received two show-cause notices from Sebi and is in the process of responding to them. READ MORE