3 reasons why Madhusudan Kela is bullish on PSU banks

3 reasons why Madhusudan Kela is bullish on PSU banks

Veteran fund manager Madhusudan Kela is positive on state-run banking stocks for a combination of factors and believes the space can give a "positive surprise" going forward. In an interview with CNBC-TV1, Madhu - as he is widely known - said PSU banking stocks look quite promising, a theme that is "yet to play out".

Kela, the founder of MK Ventures, said the current cycle is very different for PSU banks. "I have been very positive on public sector banks; they have not yet played out but we are always very early," he said.
Here are three reasons behind the market veteran's bullish view:
Provision coverage ratio
Kela is positive on state-run lenders' provision coverage ratios, which is the percentage of money banks set aside to tackle bad loans.
PSU banks have provided something like Rs 11 lakh crore in provisions in the last six years and made a profit of Rs 10 lakh crore, he said. "So there is a net-net loss in the last six years...if you consolidate all PSU banks," said Kela.
If you have a provision coverage ratio of 85 percent, a recovery in PSU banks, given that they all have raised capital, "will surprise most people", he opined.
Realty boost
Kela expects an impending pickup in realty to give an impetus to public sector banks. "None of these banks has lent money without collateral and the preliminary value of the collateral is real estate... If the real estate starts to pick up, obviously you will have a lot of write-back," he said.
His remarks come at a time when many experts are expecting the long-consolidating realty sector to get a boost in the coming festive season. India's festive season, which typically starts in October.
Capex cycle
In Kela's view, a pickup in the capital expenditure cycle will enhance the pricing power of lenders, boosting their profitability.
He expects PSU banks to beat market expectations on the balance sheet growth front, and post a significant recovery in terms of non-performing assets.
How has the basket been performing?
PSU banking stocks have outshone their private sector counterparts so far this year, helping the Nifty Bank - which tracks the stocks of 12 major private as well as public sector lenders in the country - beat the headline Nifty50 index. 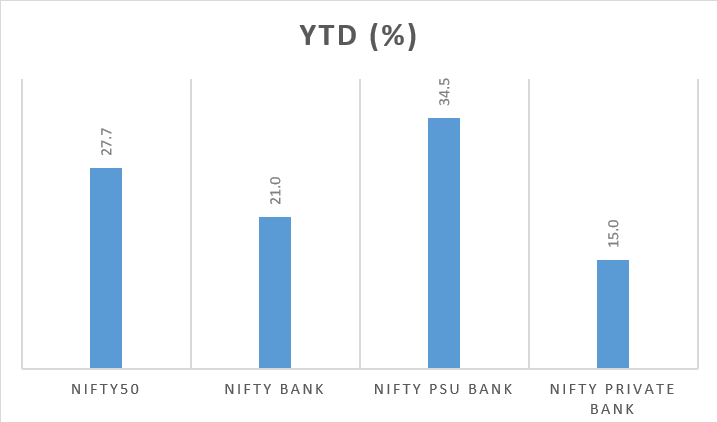