According to analysts, the major concern for the market currently is the serious slowdown seen in various sectors that seemed cyclical at the start but is turning out to be structural in nature.

After volatile sessions, the Sensex and the Nifty50 ended flat in August with gains in IT, auto, and pharma indices capped by losses in metals and banking sectors. BSE Metals, Bankex and power indices fell 12 percent, 5 percent, and 4 percent, respectively.

Investors continued to remain cautious amid the ongoing trade tensions between the US and China, US Fed commentary on the future rate cut and a global sell-off. All these, along with the fading hope of any measures to revive the economy, turned the market bearish in August.
It was only at the end of the month that the market saw some relief as the government announced a rollback of surcharge on FPI and a slew of measures to boost the economy.
However, on September 3, Indian shares dropped sharply to end over 2 percent lower after country's economic growth in the first quarter of the current fiscal slipped to an over six-year low of 5 percent as consumer demand weakened and government spending slowed.
The Sensex ended 770 points lower at 36,563 on Tuesday, while the broader Nifty50 index lost 225 points to end the day at 10,798.
According to analysts, the major concern for the market currently is the serious slowdown seen in various sectors that seemed cyclical at the start but is turning out to be structural in nature. To reverse the current slowdown, tough economic reforms would be needed.
Before the Q1 earnings season, Kotak Institutional Equities was projecting Nifty50 earnings for FY20 and FY21 to go up by 24 percent and 16 percent, respectively. However, the earnings forecast of Nifty50 for FY20 could get cut by 4-6 percent, it added.
With the ongoing volatility in the market, Kotak suggests a model portfolio with stocks with strong fundamentals. The banking sector has the highest weightage in the portfolio, 29.2 percent, followed by IT stocks (13.8 percent). Axis Bank, HDFC Bank, ICICI Bank, State Bank of India are its top picks in the banking space, while among NBFC, it only prefers HDFC.
The brokerage is also bullish on Colgate-Palmolive and United Spirits among consumer durables, Reliance industries in the oil and gas space, and Sun Pharma and Torrent Pharma in the Pharma sector.
This is the model portfolio suggested by Kotak post the volatile August: 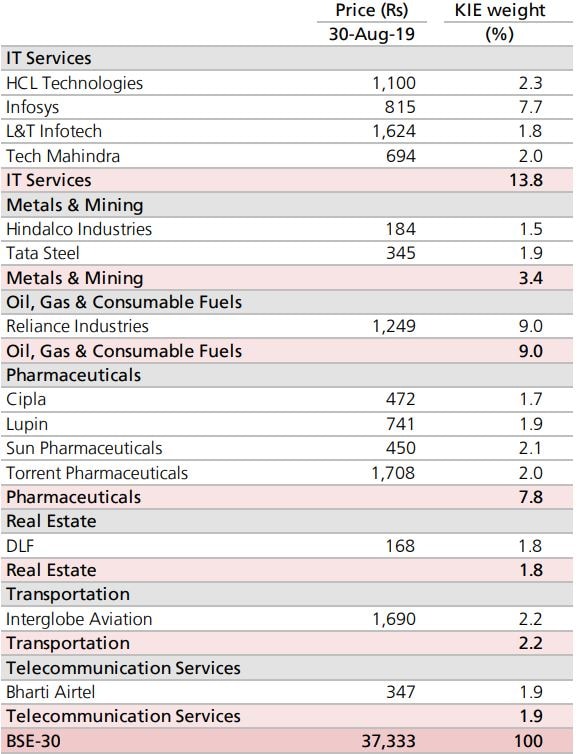