TRADE
Shares of ICICI Bank rose 2 percent in early morning trade on Monday a couple of days after the private lender clocked an almost 50 percent growth in standalone profit for the quarter ended June as bad loan provisions declined sharply and asset quality improved.
The bank's stock has been gaining for the past six days and has risen 7.04 percent in the period. 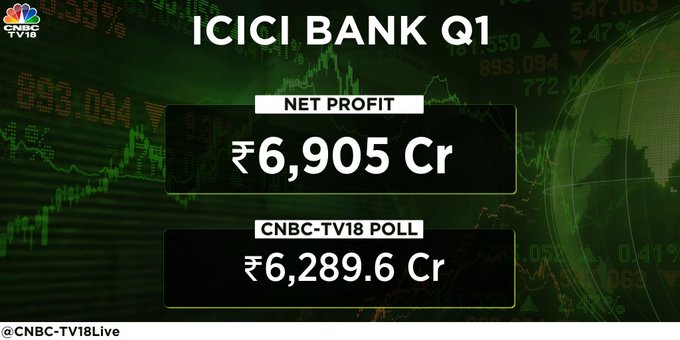 Read More: ICICI Bank net profit jumps over 49% as asset quality improves
Market expert Prakash Diwan believes that ICICI Bank might not give that delta, but investors would be happy to have it in the portfolio. “However, it might not create some amazing alpha going forward as much as the smaller banks would,” Diwan said.
Dhiraj Agarwal from Ambit Capital said that ICICI Bank continues to be their top pick in the banking sector along with State Bank of India (SBI).
“I think we will still continue to hold and still continue to buy ICICI Bank shares. We have seen in the past that this overcrowded trade concept or consensus trade concept doesn't really matter. If the company continues to perform and deliver, the stock price keeps on getting marked higher. We see more upside in ICICI Bank, it is our top pick in the banking sector,” Agarwal said.
JM Financial Services has a “buy” rating on the shares of ICICI Bank at Rs 800-805 band, Ashish Chaturmohta, director and head of research, said. “This looks like a promising bet with Rs 790 as trading stop loss, and we expect Rs 850-860 in short- to medium-term in the stock,” said Chaturmohta.
According to Krishnan ASV, lead analyst-BFSI at HDFC Securities, most of the large mutual funds are up to the neck on ICICI Bank, especially given what is happening with other private sector banks. “This has become almost a sole trade. So, to that extent, I would not be surprised if almost all the large mutual funds are up to their neck,” said ASV.
What else helped ICICI Bank make profit
Apart from the improving asset quality (as shown in the table below), the bank's core net interest income (NII) went up by 21 percent to Rs 13,210 crore on the back of a 21 percent increase in overall loans. Net interest margin (NIM) widened to 4.01 percent from 3.89 percent in the year-ago period.
The non-interest income was impacted by a dip in treasury gains at Rs 36 crore against Rs 290 crore in the year-ago period, while the fee income rose 32 percent to Rs 4,243 crore. 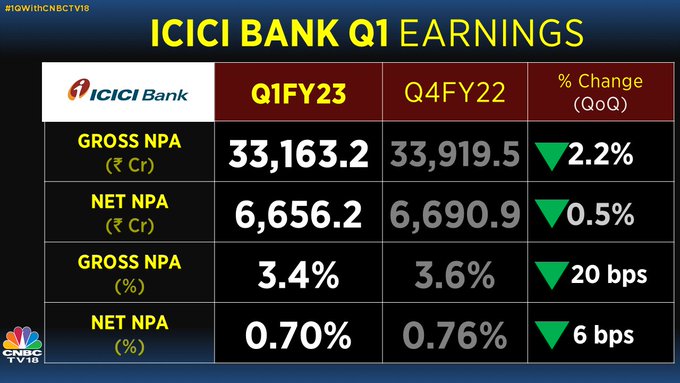 After the results announcement, ICICI Bank's executive director Sandeep Batra said new provisions had been set aside because of what he called "volatilities in the market".
ICICI Bank, in their conference call on Saturday, also said that the lender saw 35 percent growth over the previous quarter in spends by non-ICICI Bank customers on the digital app.