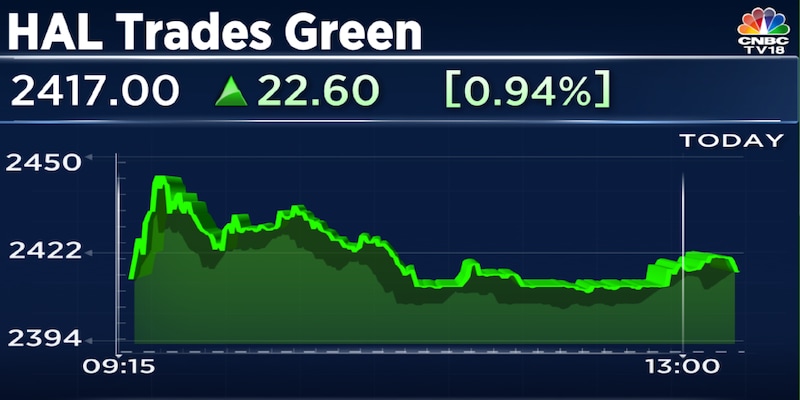 “HAL is proud to be associated with India's first indigenously designed and built aircraft carrier, IAC-1 Vikrant which was commissioned recently as INS Vikrant by the Prime Minister at Kochi,” the company said in an exchange filing.

Shares of Hindustan Aeronautics Limited (HAL) rose over 2 percent and touched the 52-week high of Rs 2,450 in early morning trade after the company said it assembled and tested gas turbines that were used in the recently commissioned aircraft carrier, IAC-1 Vikrant.
At 11:25 am, shares of HAL were trading at Rs 2413, a 0.8 percent up from the previous close on the BSE.
“HAL is proud to be associated with India's first indigenously designed and built aircraft carrier, IAC-1 Vikrant, which was commissioned recently as INS Vikrant by the Prime Minister at Kochi,” the company said in an exchange filing.
The company said that these gas turbines were put together and tested at Bangalore's special HAL facility.
Also Read: Bajaj Auto may ride on post-festive demand and rural recovery while export pain continues
“HAL carried out critical activities towards readiness of IAC for basin trials. HAL's team was actively involved in integrating the power plant to the IAC and was onboard IAC for all sea trials without foreign OEM representatives contributing substantially to the Make-in-India concept,” Hindustan Aeronautics said.
The company’s robust performance and business outlook have fuelled investors' interest in the stock. HAL has benefited from the Indian government's efforts to increase defence indigenisation. In the year so far, the stock has gained over 95 percent.
Also Read: Bharti Airtel plunges after 1.8% equity changes hands via multiple block deals
The company's last financial year earnings report notified that the current order book stands at Rs 82,000 crore. The defence company also expects to clock 6-7 percent revenue growth for FY23.
“We project the same amount of increase in our revenues, 6-7 percent and beyond that, we intend to increase our revenues because of new projects coming into play. So, FY24-25 onwards, it will definitely increase,” R Madhavan, chairman and managing director, HAL, told CNBC-TV18.
Meanwhile, brokerage firm Morgan Stanley has an 'overweight' call on shares of HAL with a revised target price of Rs 3,024.
Catch latest stock market updates on CNBCTV18.com blog
Check out our in-depth Market Coverage, Business News & get real-time Stock Market Updates on CNBC-TV18. Also, Watch our channels CNBC-TV18, CNBC Awaaz and CNBC Bajar Live on-the-go!