OMCs hit after govt tells them to absorb Re 1 per litre cost: Here's what brokerages have to say

OMCs hit after govt tells them to absorb Re 1 per litre cost: Here's what brokerages have to say 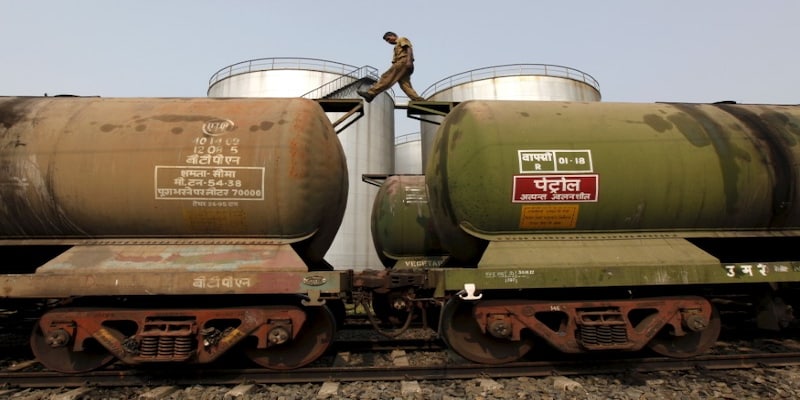 Shares of oil marketing companies tanked on Thursday after the government announced that the OMCs will have to absorb Re 1 per litre cost.

Companies like Hindustan Petroleum Corporation Limited (HPCL), Bharat Petroleum Corporation Limited (BPCL) and Indian Oil Company Limited (IOCL)  lost a chunk of their market capitalisation.
HPCL lost Rs 4,560 crore, 12.23 percent; BPCL lost Rs7,800 crore, 11 percent and IOCL lost Rs 13,594 crore, 10.50 percent, respectively.
Here's what brokerages are saying on the fall in oil marketing companies:
HSBC
Brokerage house HSBC has retained its buy rating on BPCL, IOC and HPCL but said the risks to the near-term earnings have increased. It said that the companies are likely to earn zero margins on auto fuels in the near-term and expect the OMCs to benefit from an upcycle in the diesel margins. "In our base cases, we expect marketing margins to normalise in the next financial year," the report said.
Goldman Sachs
Goldman Sachs said that the announcement of the excise cut has confirmed the reversal of deregulation of the fuel retail market and said that this move will pull down the earnings and valuations for the OMCs. The financial house said that out of all the OMCs, HPCL will be the most impacted as it has the highest exposure to the fuel retailing business. The financial house downgraded HPCL and BPCL to sell from buy.
CLSA
The fuel price cut will bring down the earnings per share (EPS) of the OMCs between 23 and 46 percent, CLSA said.  The ratings agency cut the EPS estimates and target prices for IOC, BPCL and HPCL and have retained a sell rating on these.
Citi
Financial house Citi said the re-imposition of the price controls are an 'unequivocal negative' for the oil marketing companies. The financial house cut the target of the three oil marketing companies between 42 and 57 percent and downgraded them from buy to sell. Citi said there is a possibility of a further downside despite the sharp year-to-date underperformance.
Check out our in-depth Market Coverage, Business News & get real-time Stock Market Updates on CNBC-TV18. Also, Watch our channels CNBC-TV18, CNBC Awaaz and CNBC Bajar Live on-the-go!