FY20 could be the worst year for FMCG companies in 15 years, warns Credit Suisse

Updated : September 20, 2019 09:30:53 IST
Global brokerage Credit Suisse believes that FY20 is likely to be the year of worst revenue growth for the Indian FMCG sector in 15 years
The brokerage expects 2Q and 3Q FY20 to see a further slowdown in revenue growth to 5 percent.
The few companies which can grow faster than their past three years average and faster than peers in their categories are Nestle, Dabur, and Colgate, it said.

In a report to its clients, the brokerage noted that the slowdown started in 2016, but was camouflaged first by trade disruptions in 2017 caused by demonetisation and GST, and then by the low base effect leading to high growth in FY19.

The brokerage expects 2Q and 3Q FY20 to see a further slowdown in revenue growth to 5 percent. This will make FY20 the slowest year of growth for FMCGs in 15 years. The last period of such low growth was 2000-03. 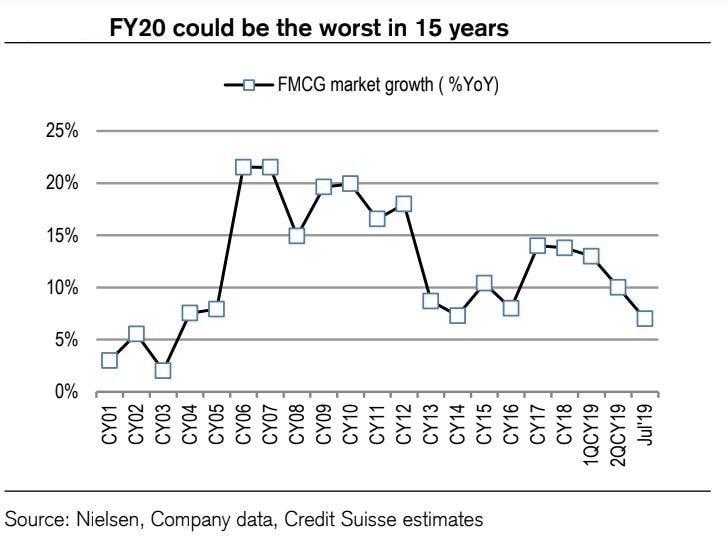 Meanwhile, agricultural slowdown, liquidity, employment issues are also playing out simultaneously. Agri GDP growth has been at a 15-year low since 2018. Liquidity worsened post-October-2018 after NBFCs faced a liquidity crisis. Employment challenges for small businesses also started with demonetisation and GST and were aggravated due to liquidity.

However, despite the slowdown between FY16 and FY19, FMCG earnings grew, aided by fall in crude prices and GST savings, the report stated.

GST rollout in FY18 brought in many tailwinds for margins. The direct impact included input credit was fully available which led to significant cost savings, entry taxes for movement of goods was abolished, and logistics became more streamlined, Credit Suisse said in the report.

The other big impact was the GST rates on a large number of products like soaps, shampoo, detergent, toothpaste, etc., which was cut to 18 percent from earlier effective indirect taxes of 23-24 percent. While companies passed on these price cuts, it is likely that they reduced consumer promotions leading to margin expansion, the report noted.

Input costs for home and personal care companies like crude oil derivatives and palm oil also fell sharply after 2015, which helped the expansion of gross margins.

As per the brokerage, none of the FMCG companies will be immune to the slowdown. However, the intensity of the impact will vary across companies due to various factors.

The few companies which can grow faster than their past three years average and faster than peers in their categories are Nestle, Dabur, and Colgate, it said.

The brokerage expects Nestle to grow relatively faster than other FMCG companies as it is gaining market shares, there is a strong pace of innovations, including entry into new categories, and Nestle has low salience of rural where the slowdown is more intense.

Dabur is also likely to grow ahead of peers as it is gaining share in most categories due to company-specific plans and the loss of share of Patanjali, the added.

It also expects Colgate to grow ahead of oral category growth.

Meanwhile, the brokerage downgraded Britannia to 'neutral' (from Outperform) as its core category of biscuits has slowed down sharper than the FMCG average. They also downgrade Pidilite to 'underperform' (from Neutral) due to stretched valuations and slowdown in real estate linked businesses.