This article is more than 5 month old.

Friday, the 13th and stock markets: What numbers say about so-called 'unlucky' day

It is of note in the last 400 years, 688 Fridays have fallen on the 13th. It is a numerical trend, the 13th of the month falls on a Friday more than any other day. And in the last 10 years, according to NSE data, stocks have risen about 52 percent of the time on Friday the 13th, and fallen 47 percent of the time.

Friday the 13th might be scary but Indian markets this fiscal year have had their own mind and this day, known for its unluckiness, was no exception. Despite the superstition attached with this combination, the Nifty50 index surged over a percent higher to notch record highs of 16,529 points. Granted it's been doing the same in the last two weeks.
The superstitions associated with Friday the 13th are right up there with breaking a mirror and a black cat crossing your path. It sends a shiver down the backs of many people, specifically investors and traders, most of who by nature are superstitious folk. *cough* Astro traders *cough*
However, the fear associated with the number 13 is not entirely unfounded.
Art Cashin of UBS Financial Services, in 2015, noted the negative myth of Friday the 13th  may be based on a novel published in 1910.
The novel named Friday, the Thirteenth, written by Thomas Lawson was about a broker who chooses a day to spur a panic on Wall Street. And what better day than Friday, the 13th?
"Friday, the 13th would break the best bull market ever underway," a character said in the book. To be clear, it was a fiction novel.
You might like | Market Unplugged Podcast: Why midcaps, smallcaps are underperforming even as Sensex, Nifty make record highs
So, to avoid anything disastrous from happening, the traders in the US used to wear hats, hoping it would ward off any evil spirits. Friday the 13th was named 'Hat Day'. Everything was dandy until the fated date: Friday, November 13, 1987.
Wall Street, fresh off the scare of the worst sell-off in history in October — saw the Dow Jones Industrial Average plunging over 20 percent in one session. An equivalent of a 3,500 point sell-off.
Cashin told Business Insider the crash ruined the careers of many traders. That was the last official Hat Day American traders celebrated.
What about India though?
Good question. I'll let the numbers speak for themselves. 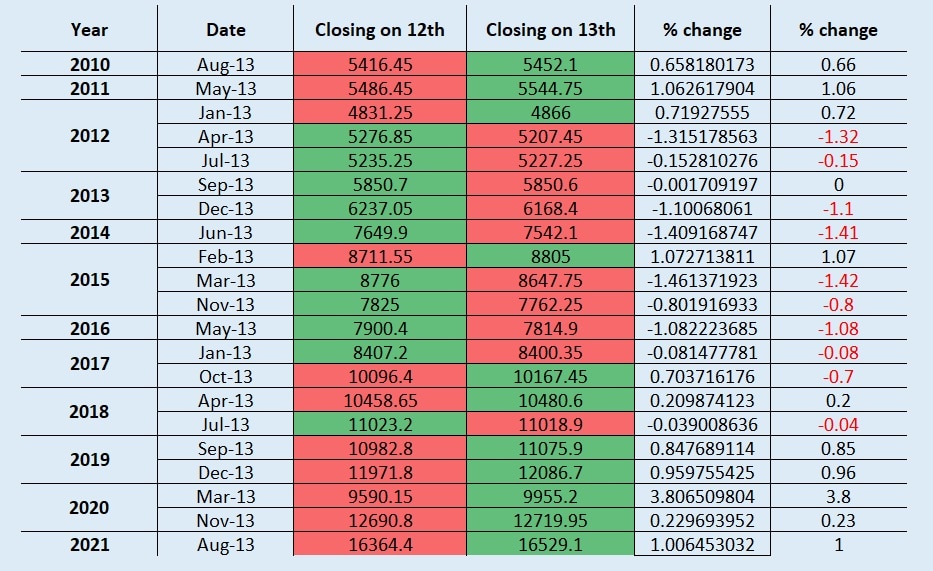 Performance of Nifty50 from 2010-21 on Friday, the 13th
It is a very close call, while on 11 instances the investors have shrugged off the superstitions surrounding Friday the 13th, on the rest 10 instances, they came true.
The worse was on March 13, 2015, when India's equity benchmark index, Nifty50 ended over 1.42 percent lower. The bears tried to hold the coming 13-Friday date combination as well, but the market closed flat, albeit in the red.
In the past three years and five sessions, however, Nifty50 has ended higher.
On November 13, 2020, the Nifty ended less than half a percent higher. But months ago on March 13, 2020, the index had surged over 3 percent. Similarly, on both Friday the 13ths in 2019, the market had closed nearly a percent higher.
Noting the intensity of the market drop, there were only 4 out of 21 instances when the market closed over a percent lower.
While superstitions may help you take charge of a situation and manage anxiety, mixing them with markets—where irrational decision-making is at a peak—is not a good idea.
Also Read | Friday the 13th: History of terrible events that happened on the 'cursed day'
(Edited by : Santosh Nair, Ajay Vaishnav)
Note To Readers

It is of note in the last 400 years, 688 Fridays have fallen on the 13th. It is a numerical trend, the 13th of the month falls on a Friday more than any other day.  According to the data, stocks have risen about 52 percent of the time on Friday the 13th, having fallen 47 percent times.