Flashback 2022: An eventful year for the market

Flashback 2022: An eventful year for the market

Amid all the global uncertainty, the Indian market stood tall and resilient because of strong domestic demand. PLI schemes and the China +1 factor playing for all the corporates in India and resilient domestic flows matching FII selling to the dollar. Here's a round-up of 2022, an eventful year for the market-

December 30 was the last trading session of 2022. As we look forward to 2023, let's rewind 2022 and look at what an eventful year it was for the markets. It’s easy for us to forget the number of events that we actually had to overcome during the last year. They say bull markets actually climb walls of worry. For us, it was fortresses of worry this year.

At the very start of 2022, the COVID-19 Omicron wave that plagued the nation. And just as we were recovering from that, the Russia-Ukraine war fell upon the world, as a result of which there was a lot of uncertainty and massive global inflation.
Guess what the global inflation and the COVID-led printing money caused the central bankers of the world to do? They printed a lot of money, so they had to unwind all of that, which led to a lot of rate hikes by the US Fed — the highest in history in one year. This was followed by the European energy crisis somewhere around the onset of the winter. All of this was plagued by massive FII selling — the highest in the calendar year for our markets.
Also Read: Coal India to HDFC Bank — the 10 Nifty stocks that stood out in 2022
Amid all this, the Indian market stood tall and resilient because of strong domestic demand. PLI schemes, and the China +1 factor playing for all the corporates in India and resilient domestic flows matching FII selling to the dollar. In light of this, the Indian market continued its streak of gains — in fact a seven-year gaining streak —  the highest in the history of Nifty trading. Five percent gains for both the Nifty as well as the Sensex. In the last seven years the market has compounded at over 12 percent. How did we fare against the world? The Indian markets had a 5 percent gain as against the Brazilian markets, which saw just under 5 percent. And we far outperformed developed markets — the likes of Dow Jones, Hang Seng as well as Nasdaq, which was down 33 percent in 2022. However, India also saw a weakening in the currency because of the US Fed rate hikes, etc. The rupee depreciated by about 11 percent. So comparing it in dollar terms, we actually had a negative return of 5.5 percent This is the highest FII sell-off that we've seen in a calendar year in the history of our markets. 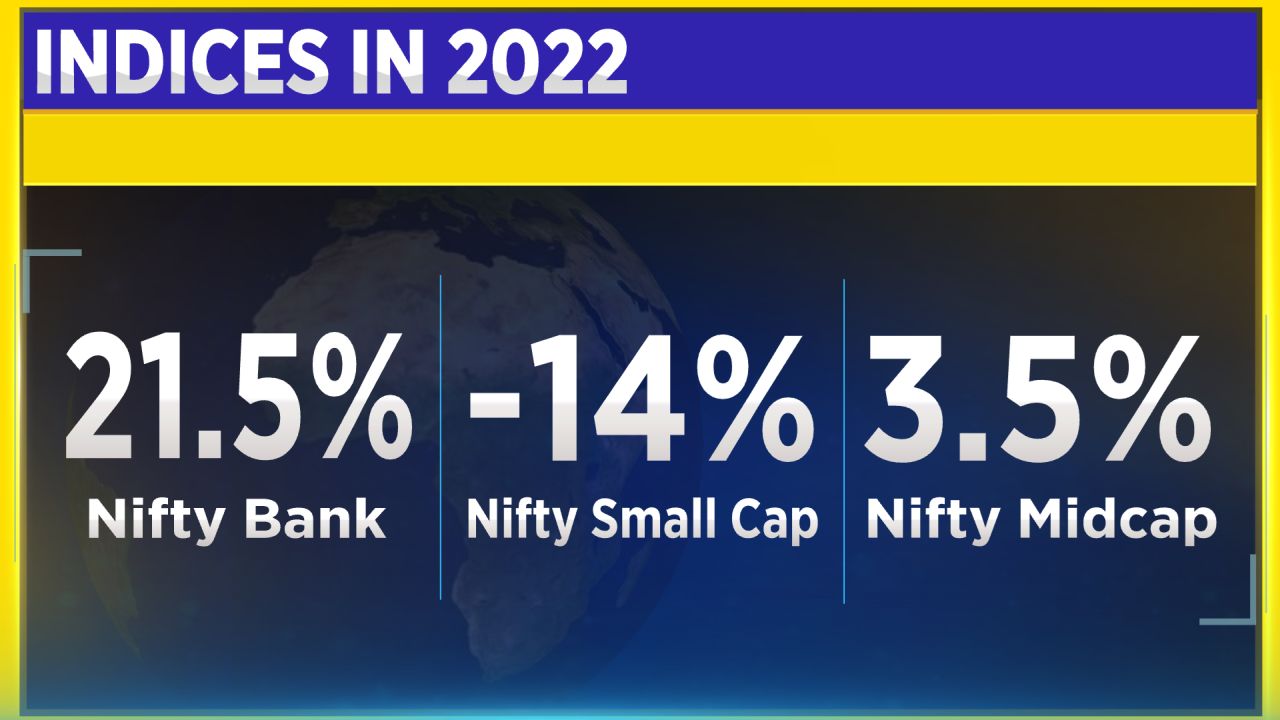 How did the other indices fare? The Nifty bank was a strong outperformer —21.5 percent higher. It was a weak year for the broader market. So the midcap index just managed to close in the green, but the Nifty small cap was down by 14 percent. When it came to individual sectors, it was the year of the PSU banks — 70 percent higher on that index. The metals grew about 22 percent at an index level, but it was a fair amount of weakness for the pharmaceutical pack and the IT pack — one of the weakest years for the IT pack. 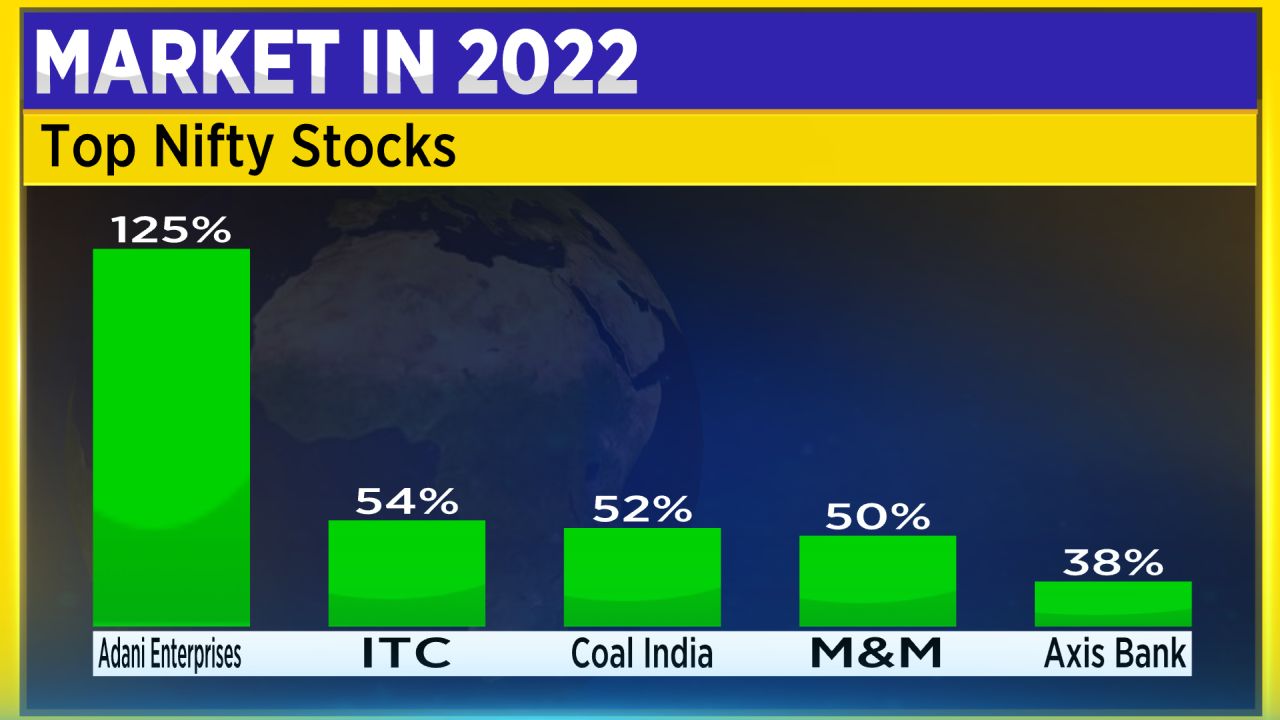 For individual stocks, the latest entrant to the Nifty was its top performer as well. Adani Enterprises did 125 percent in terms of gains, ITC got the top honuors board as well. This year was the year of ITC with 54 percent gain, and Coal India, up around 52 percent as well. A lot of the old power companies came back — NTPC was up 34 percent. 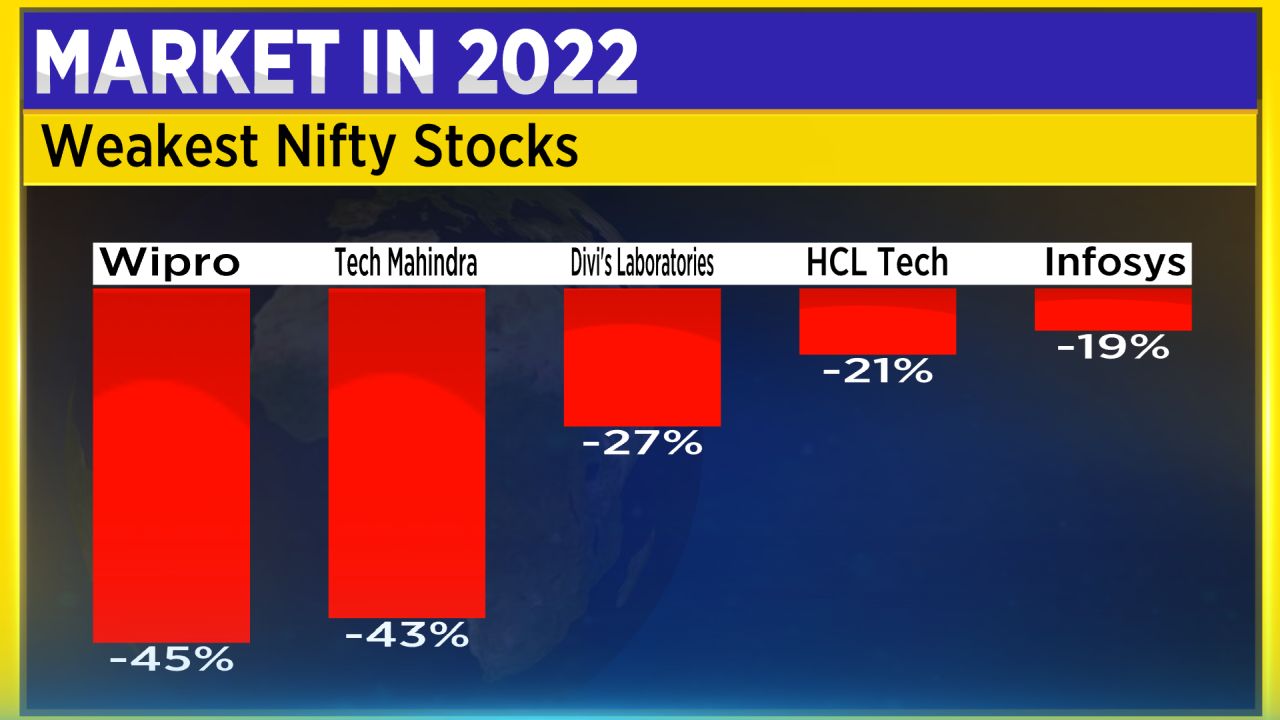 In terms of other underperformers this year, however, the IT pack stood out —Wipro leading the way, down 45 percent. Tech Mahindra was down 43 percent as well. Divi’s Labs did not do too well either. And HCL tech, Infosys were down 19 to 21 odd percent. This year was the year of PSU banks. With 144 percent gain for UCO Bank, Canara Bank was up around 63 percent as well and SBI was up 33 percent. 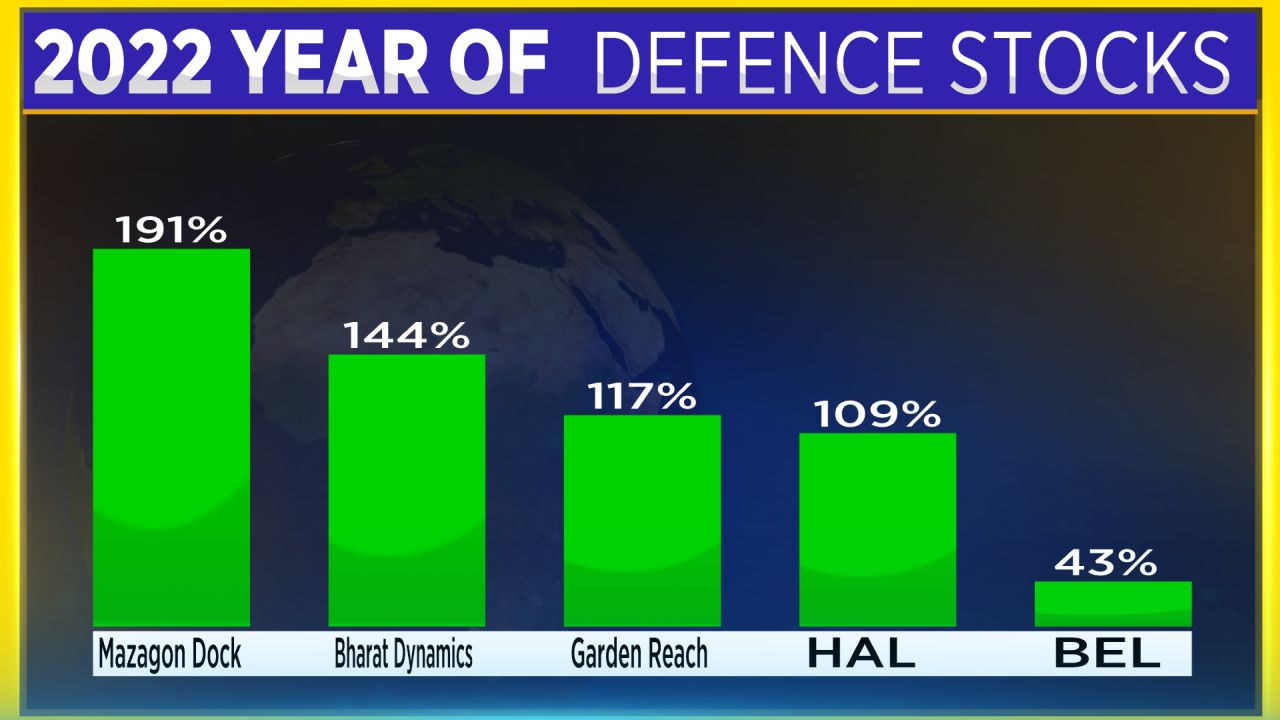 In terms of other sectors that did well, it was the defence stocks — Mazagon Dock almost 200 percent higher. Those who invested at the start of the year in Garden Reach would have had their money doubled. BEL itself would have given investors around 43 percent in terms of returns. We had some other midcap gainers as well — Indian hotels was 75 percent higher, TVS motors zoomed ahead by 73 percent, Cummins and Federal Bank were up anywhere between 40 to 66 percent as well. In terms of losers though, we had the midcap IT names — Mphasis, Firstsource, Birlasoft — all of them would have halved investors' money. So would IEX in fact, from the start of this year, was down 44 percent. 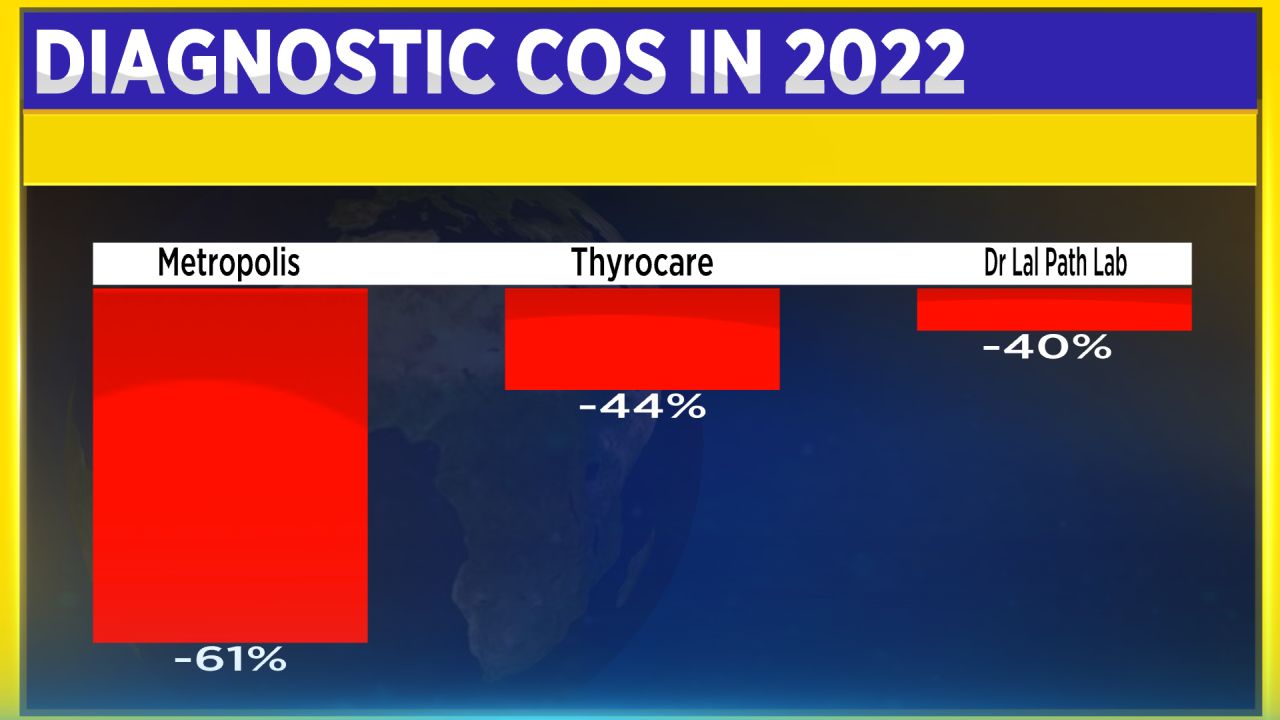 We were coming off a COVID year, so there were some declines in diagnostic companies as well — Metropolis, Dr Lal, falling anywhere between 40 to 60 odd percent. 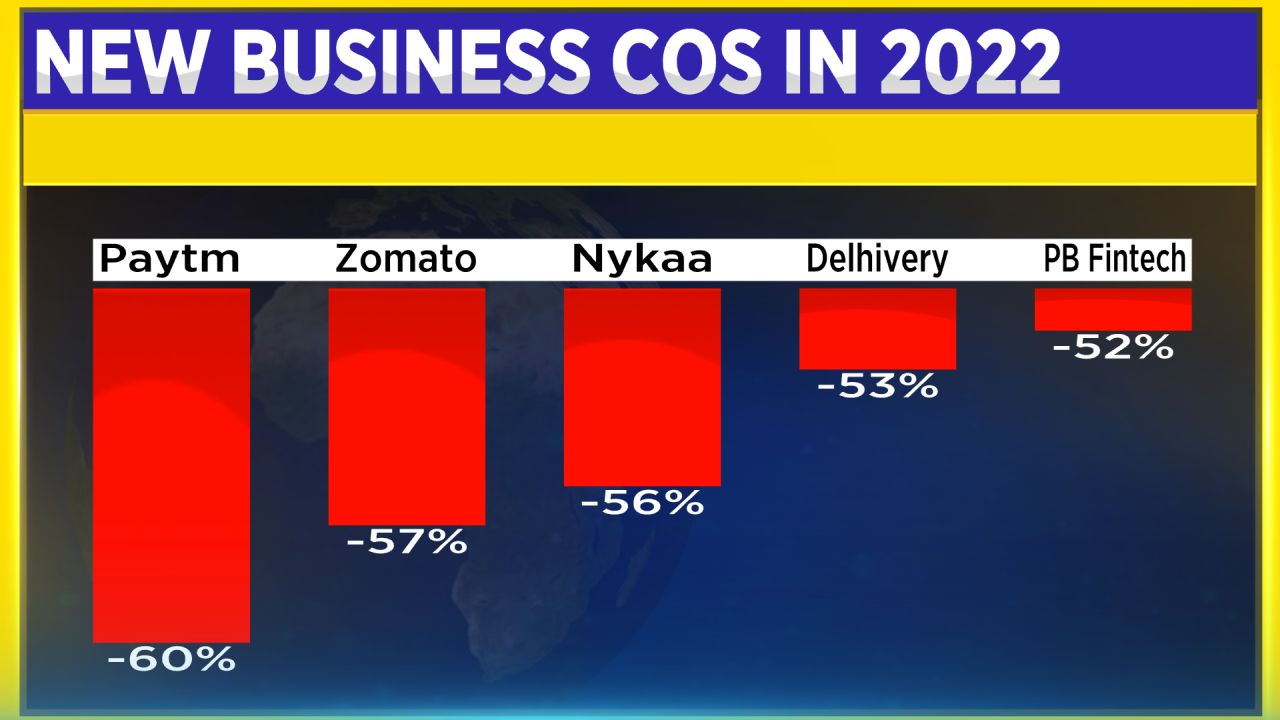 And this was also the year where we saw all the new age businesses decline.  A big cut anywhere between 50 to 60 percent on Paytm, Zomato, Nykaa, PB FinTech, Delhivery, even CarTrade was down 45 percent. Ending on a positive note, there were a lot of gainers from the broader markets — Adani Power was up almost 203 percent, and NDTV 210 percent. It was the year where sugar did well as well — 240 percent for Ugar Sugar, and FACT was up 180 percent.
So that's the year that was 2022 — an eventful one for the markets.
(All figures mentioned are as of December 30).
Also Read: Biggest billionaire losers of 2022 — Elon Musk, Jeff Bezos lead the list
Check out our in-depth Market Coverage, Business News & get real-time Stock Market Updates on CNBC-TV18. Also, Watch our channels CNBC-TV18, CNBC Awaaz and CNBC Bajar Live on-the-go!
Tags