Fed minutes hint at a slower pace of rate hikes. Here's what's in it for India

Fed minutes hint at a slower pace of rate hikes. Here's what's in it for India 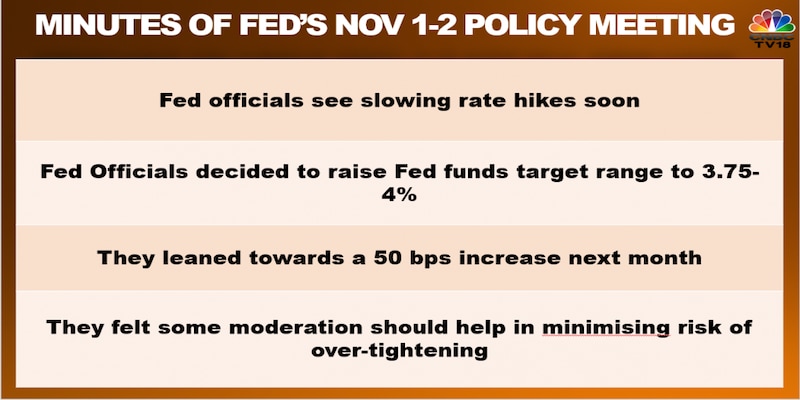 Fed officials see a slowing pace of hikes in COVID-era interest rates ahead. Here's how Dalal Street is reading minutes of the last policy meeting of the US central bank's rate-setting panel.

Minutes of the Fed's latest policy meeting suggest the US central bank may soon ease the pace of hikes in COVID-era interest rates, sending positive signals to global markets. Investors worldwide have waited eagerly for any sign of some moderation, if not an early end, to the current cycle of rate hikes.

"A substantial majority of participants judged that a slowing in the pace of increase would soon be appropriate," said the November 1-2 meeting minutes of the Fed's rate-deciding panel.
The minutes come when major central banks rapidly increase rates just as much to tame inflation without hampering economic growth amid warnings of at least a mild global recession. While inflation is at a 40-year high in the US, in India, it has remained above the upper end of the RBI's comfort zone for three quarters in a row.
ALSO READ: What to expect from RBI now 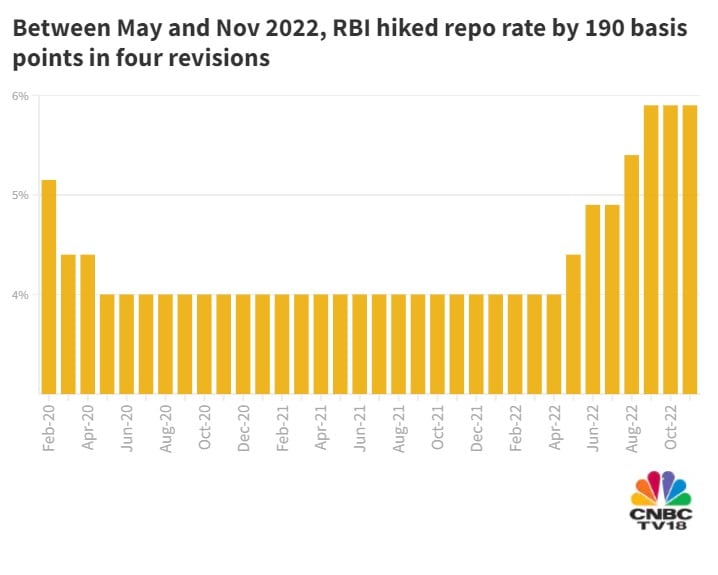 What to make of the latest minutes?
Fed officials leaned towards a 50 bps increase next month — following four back-to-back hikes of 75 bps each on top of a cumulative 75-bps raise in March-May, concluding that some moderation should help minimise the risk of over-tightening.
Though Fed officials acknowledged signs of inflation abating, some expressed concern about risks to the financial system should the Fed continue with its current pace of policy tightening.
The post-COVID hikes in the world's largest economy mark the US central bank's most aggressive tightening drive since the 1980s to counter uncomfortably high inflation. Many analysts believe concerns about a demand slowdown owing to a record addition in daily COVID infections in China and the consequent lockdowns may also build a case for easier rate hikes. Most of them see the US interest rates peak around five percent by the middle of 2023.
"Rising COVID cases in China will certainly impact global growth in 2023. Therefore central banks of major economies will have to slow down rate hikes to prevent a global recession," VK Vijayakumar, Chief Investment Strategist at Geojit Financial Services, told CNBCTV18.com.
What's in it for emerging markets like India?
Experts have pinned hopes on India's relative resilience to other emerging markets, drawing optimism from macroeconomic indicators on critical areas such as manufacturing and bank credit growth.
Global economic activity is undergoing a sharper-than-expected slowdown, with higher inflation in developed countries than their emerging market counterparts, SBI Chairman Dinesh Kumar Khara told CNBC-TV18.
"Financial conditions in most of the regions have got tightened. Russia's invasion of Ukraine and the lingering COVID-19 pandemic weigh heavily on the outlook. However, in such an uncertain and fragile global economic environment, the Indian economy has shown its resilience all these years," the SBI chief said.
Morgan Stanley expects GDP growth in Asia to improve by 4.6 percent in the second half of 2023, from 3.5 percent currently, he said.
Some say easing crude oil prices — owing to the recent slump amid concerns about falling demand in China, the world's second-largest oil consumer — support economies like India, which meets the lion's share of its oil demand through imports.

India's capex cycle has begun, and the economy should grow by 6.2% next year & 6.5% in FY25, says @MorganStanley’s Chetan Ahya. He tells @latha_venkatesh that he expects a small rate cut from RBI by the end-2023 1/2 pic.twitter.com/nCJb1QpAy5

"Many of the risk factors for India appear to be subsiding, especially with crude oil cooling off, which is a big positive for Indian banks... A pause will follow an expected reduction in the pace of (rate) hikes, but positive for global markets," AK Prabhakar, Head of Research at IDBI Capital Markets, told CNBCTV18.com.
"One can expect huge capex in the Budget with more spending on infrastructure and defence, which is an opportunity in the Indian market," he said.
Catch the latest market updates with CNBCTV18.com's blog
Check out our in-depth Market Coverage, Business News & get real-time Stock Market Updates on CNBC-TV18. Also, Watch our channels CNBC-TV18, CNBC Awaaz and CNBC Bajar Live on-the-go!