Dreamfolks Services IPO Listing: DreamFolks shares debuted in the secondary market at a premium of up to 56 percent above its issue price, in line with the trend in the grey market in the past few days.

TRADE
DreamFolks Services shares made a stellar debut in the secondary market on Dalal Street on Tuesday, with the stock of the airport service aggregator platform listing at a premium of up to 56 percent above its issue price. The DreamFolks stock began its journey at Rs 508.7 apiece on NSE, as against the IPO price range of Rs 308-326.
On BSE, the stock began trading at Rs 505 apiece, a premium of 54.9 percent.
The listing was in line with the trend in the grey market in the past few days.
The stock finished the listing day at Rs 462.7 apiece on BSE and Rs 462.9 apiece on NSE — a premium of about 42 percent.
DreamFolks' management is hopeful of maintaining a margin of 15 percent going forward.
"In terms of expansion, apart from the airports, we have started the railway lounges as well. So there are nine railway launches across India. And we have already started few of the bank programs and the network programs in these lounges... Railways could also be one of the focus for us now, because there are more and more lounges coming up in Indian railways," Liberatha Peter Kallat, Chairperson and Managing Director of DreamFolks, told CNBC-TV18.
The company is hopeful of continuing with a similar margin from the railways business.
Explaining the business, Kallat said: "Whenever there is a customer going to the lounge and tapping their card, the transaction is complimentary or the benefit is complimentary. The customer does not pay anything at the lounge — he has a free lounge usage."
"But for every transaction happening at the lounge, DreamFolks invoices to the bank or the card network... The card or the network would pay to DreamFolks for the transaction happening at the lounges," she added.
Learn about what grey market really is
The Rs 562-crore initial public offering (IPO) of DreamFolks concluded last month with a strong response across investor categories. The overall subscription stood at 56.7 times the shares on offer, as the IPO received bids for a total of 53.7 crore shares as against the 94.8 lakh shares on offer, according to exchange data. 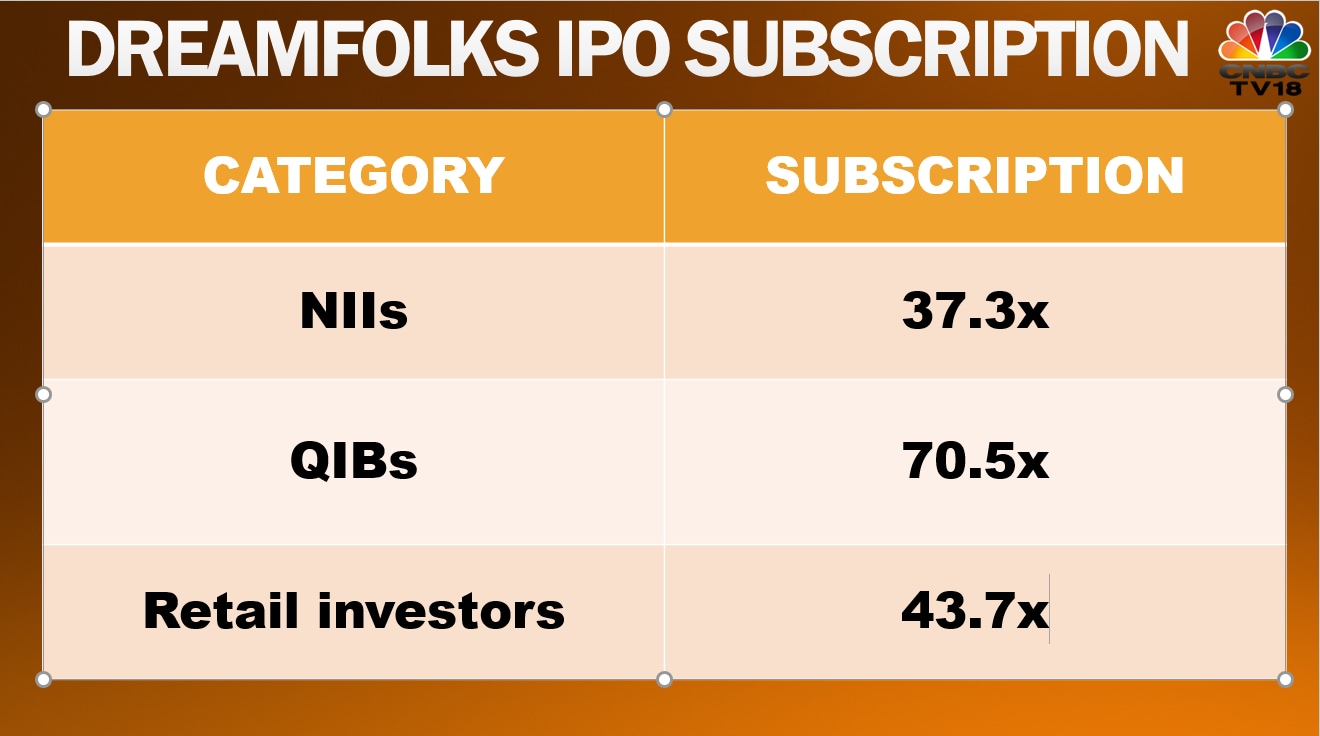 ALSO READ:   DreamFolks IPO subscribed almost 57 times on final day of bidding
Elixir Equities Director Dipan Mehta told CNBC-TV18 that DreamFolks, in his view, could be a a concept stock as well for investors looking to play the travel theme.
"If you look at the choices around you, apart from hotels and aviation, there is no real stock with which one can play the investment theme as far as rising travel is concerned... Maybe this particular stock could help you get in to that particular investment theme," he said.
Mehta believes that once the stock price settles down following a good listing, "it will be a good company to keep on your radar and on your market watch list".
Under the IPO, which was entirely an offer for sale (OFS) by existing shareholders, potential investors could bid for DreamFolks shares in a price range of Rs 308-326 in multiples of 46. That meant one lot of shares was worth Rs 14,168-14,996 for bidders.
Catch latest market updates with CNBCTV18.com's blog
Check out our in-depth Market Coverage, Business News & get real-time Stock Market Updates on CNBC-TV18. Also, Watch our channels CNBC-TV18, CNBC Awaaz and CNBC Bajar Live on-the-go!
Tags