As D-Street enters Samvat 2079, a look at Diwali-to-Diwali returns in past years

As D-Street enters Samvat 2079, a look at Diwali-to-Diwali returns in past years As the Nifty50 finished Samvat 2078 with a return of, Dalal Street is all set to enter Samvat 2079 — the year that begins on Diwali 2022. Here's a look at how the market has fared over the past few years.

With a special Muhurat trading session, Dalal Street entered Samvat 2079 — the year that began on Diwali 2022 in Vikram calendar. The Nifty50 finished Samvat 2078 with a loss of 252.9 points or 1.4 percent — its first negative return in a Vikram calendar year since Samvat 2071 (the year ended November 2015 in the Gregorian calendar).

Over the past five years, the 50-scrip benchmark index has given an average annual return of 16.3 percent.
Here's a look at how the market has fared over the past Samvat years: 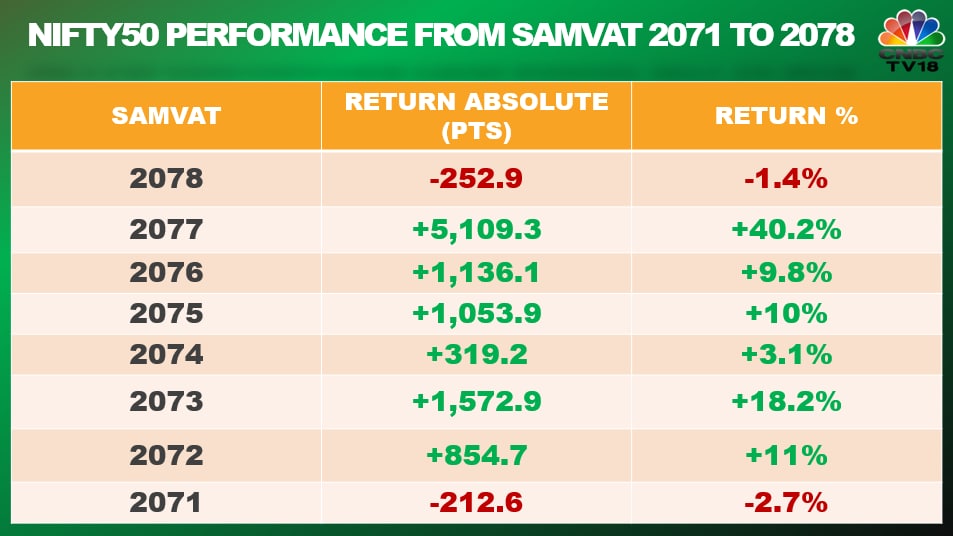 Several factors have dented the sentiment on Dalal Street this year around:
Analysts are optimistic about the year ahead amid a slew of supportive factors, such as a slowing pace of FII selling and weakness in the rupee, which boosts the profitability of export-heavy businesses such as IT — one of the worst hit spaces this year.
"Samvat 2079 will go down in India’s stock market history as the year of India’s outperformance relative to developed markets and peers. The big question as we usher in Samvat 2079 is whether this outperformance will continue. Even though India’s valuations are high from the short-term perspective, economic and earnings fundamentals partly justify the valuation premium," said VK Vijayakumar, Chief Investment Strategist at Geojit Financial Services.
"DII/retail support to the market is becoming strong enough to eclipse the FII selling," he said. Dalal Street will enter Samvat 2079 with a special, one-hour trading session — also known as the Muhurat trading session — on Monday, October 24.
This week, one can expect high volatility in the market, given the scheduled expiry of monthly derivatives contracts on October 27, said Ajit Mishra, VP-Research at Religare Broking.
"Domestic earnings and the performance of global markets will remain on investors' radar," he said.
Globally, concerns persist on the impact of aggressive hikes in COVID-era interest rates on economic growth amid warnings of a recession.
Check out our in-depth Market Coverage, Business News & get real-time Stock Market Updates on CNBC-TV18. Also, Watch our channels CNBC-TV18, CNBC Awaaz and CNBC Bajar Live on-the-go!