Follow real-time updates on Union Budget 2023Catch exclusive videos on Union Budget 2023 from CNBC-TV18
CNBC-TV18 had mentioned in Q1FY19 result analysis that the worst is over for the Indian banking sector in terms of pain in earnings and slippages in Q4FY18. The second quarter net loss of Rs 3,731 crore for the banking sector is the lowest in the last four quarters. The losses are down for more than 90 percent from the Q4FY18 numbers. The public sector undertaking (PSU) banks reported a decline of 77 percent in net loss, while 45 percent growth in profit of private banks from Q4FY18 to Q2FY19.

If Punjab National Bank (PNB) didn’t register net loss of Rs 4,532 crore, banking sector would have reported first time net profit of Rs 802 crore in the last four quarters. The second quarter saw two new records on the negative side by IDBI Bank: The CET1 (common equity tier-1) ratio was below four percent for the first time in 15-18 years, while the GNPA (gross non-performing assets) ratio at around 32 percent is the highest for any commercial bank in their operating history. 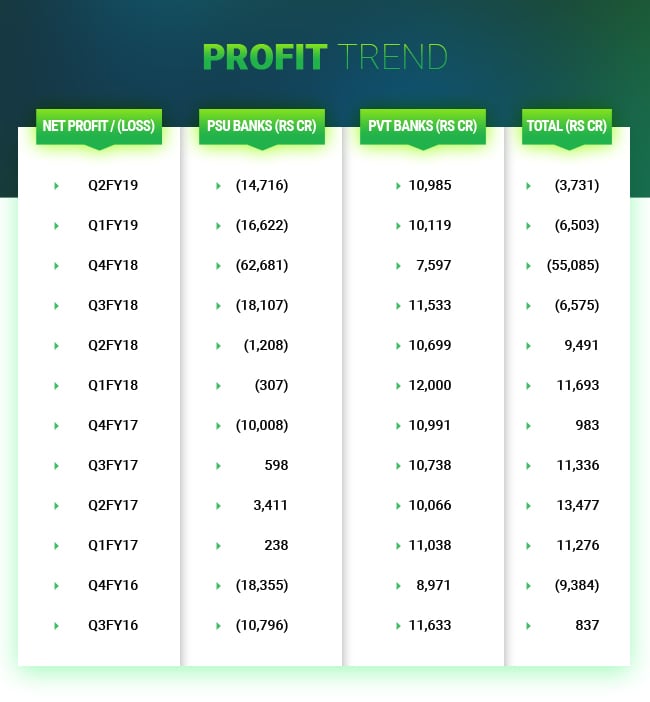 Slippages
Slippages are loans that turn into non-performing assets (NPAs) as payments are due for more than 90 days. The slippages lead a bank to lower interest income, while higher provisioning dent the earning capacity. Its vice-versa impact i.e. declining trend of slippages coupled with loan growth means better earning capacity of the bank. On the positive side, slippages have declined massively for the banking sector and the worst was seen in Q4FY18 on account of Reserve Bank of India’s (RBI) circular on restructured loans. The declining trend of slippages mean less losses for the banking sector.