‘Fuel on Fire’, who is getting the heat?

Updated : May 31, 2018 10:19 AM IST
Brent crude price is up more than 60% in last ten months.
Any increase in the price of crude oil would tend to impact the WPI inflation directly.

Fuel prices in India have been continuously on the rise. Prices of petrol and diesel have been raised for 16 successive days, but fell marginally on Wednesday as Indian Oil Corp, the country's biggest fuel retailer, marginally cut fuel prices across India. Well, by 1 paisa.

Energy hungry India, which depends largely on imports for its fuel, is bearing the brunt of a sustained rise in global crude oil prices. Crude oil prices have been rising in the international market lately due to a combination of reasons such as an uptick in demand, supply cut by key oil producers led by the Organisation of the Petroleum Exporting Countries (OPEC) and Russia, and also due to fears of US sanctions against Iran.

The benchmark Brent crude price is up more than 60% in the last ten months. India imports around 80% of its fuel requirement and this uptick has a direct impact on its crude import bill and its retail consumers are indirectly feeling the heat. Sadly, retail consumers were denied the benefits when the global crude oil prices had dropped sharply between 2015 and 2017. The Brent crude price even settled below $30 a barrel then.

During the period when the global crude oil prices were hovering below $50 a barrel, the central government along with state governments repeatedly increased excise duties and value added tax. Retail fuel prices never fell for consumers as a result.

On an average, the actual price of petrol remained around 40% of what you pay your nearest petrol pump, and the balance includes margins charged by oil marketing companies (OMCs), the central government adds excise duty, state governments charge value-added taxes (VAT), and dealer’s commission.

The government vs retail consumers: Who spent how much for a litre of petrol?

Key takeaway: During 2015-16 and 2017-18, even when the crude oil prices were low, the retail consumers were still paying 3 times of what it had costed the government for a litre of petrol.

The Indian basket of crude oil was continuously priced above $100 a barrel during February 2011 until September 2014. Retail prices also soared but nothing really changed for the consumers even when the crude oil prices cooled down. Key takeaway: More than half of what you pay  for a litre of petrol, goes to the government as taxes.

How much did the central government earn from these continuous hikes in excise duties? Key takeaway: The central government raked in around Rs. 6.8 lakh crore by hiking excise duty as many as nine times during this period

The central government even continuously raised excise duty on petrol and diesel when the global crude prices had plunged below $30 a barrel. The central government increased the excise duty nine times on petrol and diesel between November 2014 and January 2016 to take the benefits of the fall in global crude prices. The tax component in the retail selling price of petrol shot up by nearly 55%. The government has earned in all Rs 6.8 lakh crore since 2014-15 until Dec 2017 by these increases in excise duty. 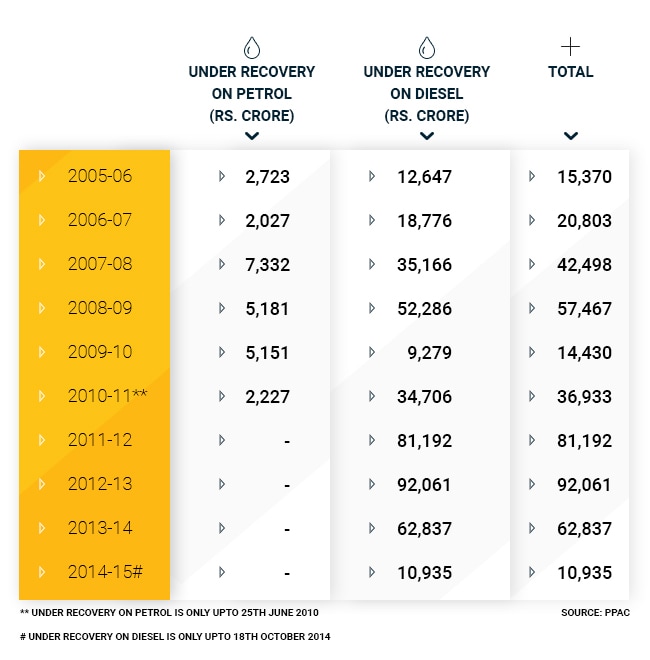 Key takeaway : The central government spent around Rs. 4.3 lakh crore for subsidising petrol and diesel between 2005-06 and 2014-15

The benefits reaped by the central government even exceeded Rs.4.34 lakh crore of aggregate under recoveries on petrol and diesel in the last ten years of the controlled pricing regime (2005-06 - 2014-15).

Double Whammy for the consumers

Indian consumers who had to wait long to enjoy the benefits of low crude oil prices as the government relentlessly added more and more money to its kitty have now suffered a double setback. Any increase in the price of crude oil would tend to impact the WPI inflation directly as crude oil and its products have a weight of 10.4% in the price index. Crude oil and refinery prices also have a linkage with the prices of other products, which would get impacted by the higher resulting cost of power, fuel, transport etc that have an indirect impact on inflation.​
Tags data Energy fuel Market