Will rupee break its recent all-time low? Here are the top factors that may contribute

Updated : May 28, 2020 01:59 PM IST
The momentum of the rupee is being pulled between the fresh global turmoil and domestic policy reforms.
Currently, the rupee has been trading above than its all-time low of 76.91 for 21 straight trading days.
Progress on vaccine development helps fuel the sentimental recovery in currencies and equities.

The rupee has been trading within its range of Rs 75-76.90 per dollar for over a month now. The momentum of the rupee is being pulled between the fresh global turmoil and domestic policy reforms. Currently, there are no dominating themes in the market to drive the trend in the rupee. However, the positive and negative developments that occurred over the course of time, the currency has still managed to sustain well within its range.

If seen historically, the rupee has taken quite some time to break its previous all-time low as shown in the chart below: 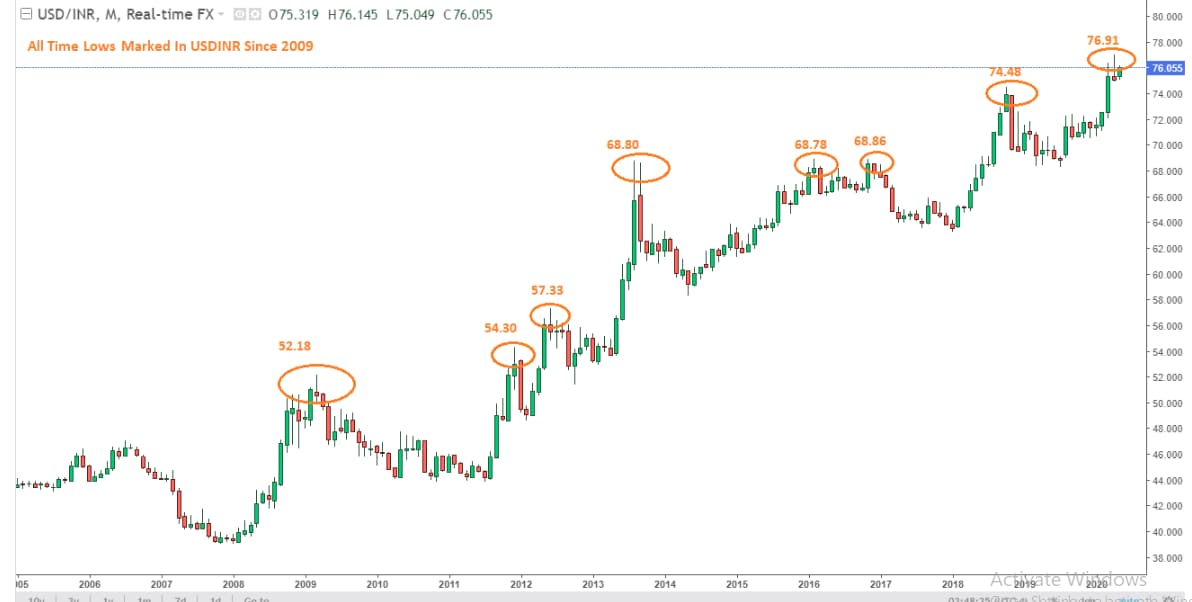 The speculative activities in the local currency market have subdued and for now, the dollar-rupee trend is guided more by the demand and supply of dollars in the market. Off late, the trade volumes were low which helped the rupee to maintain a stable environment.

Does that mean rupee will retest or break its recent all-time low soon? Or it will not break its new range of 75.00-76.90 levels?

However, going forward, this range will be broken due to known or unknown factors. Let’s understand this by assessing the below factors:

Reasons why rupee may gain further and to trade below the upper end of the range (Rs 75 per dollar):

- Progress on vaccine development helps fuel the sentimental recovery in currencies and equities.

- FII and corporate inflows amid Jio stake sale and RIL rights issues are robust which can help limit the losses in the rupee.

- The huge forex reserves of over $487 billion would help the RBI to protect the rupee from any sharp depreciation arising out of negative GDP growth, rise in unemployment, fall in consumption, and other dull economic data.

- As a result of the slowing economy and contraction in the trade deficit, the external position of the country is comfortable with the current account surplus. Merchandise exports for April plunged 60.3 percent and imports fell 58.7 percent resulting in a trade deficit of $6.76 billion. The decline in gold imports by about 100 percent to $2.83 million in April has helped in narrowing the country's trade deficit. However, Service estimates show net service exports of $6.93 billion leading to trade surplus of about $0.16 billion.

Reasons why rupee may fall further and break lower end (76.90) of the range:

- The Chinese foreign minister said that the US and China are nearing the ‘brink of new Cold war'. The relationship between the two has worsened dramatically as the US became one of the worst-hit countries by the pandemic. The world’s two biggest economies have clashed on a range of issues like trade, technology, and China’s latest move to tighten its grip on Hong Kong. This has led to the weakening of the Chinese Yuan near 7.15 offshore.

- Tensions are mounting between India and China after China has accused the Indian Army of crossing into its territory and of “blocking” its patrols and “attempting to unilaterally change the status” on the LAC.

- Lockdown had caused collateral damage to millions of daily wage earners, self-employed and people with jobs in small enterprises.

- The Indian economy has entered the COVID-19 recession with growth under pressure and MSMEs facing liquidity and solvency issues.

- The RBI’s policy statement described the inflation outlook as "highly uncertain" amid on-going supply chain disruption. This hints more policy rate cuts. The latest rate cut arouses the depreciation pressure on the Indian rupee as the outflows from the debt market might increase.

- The RBI is constantly buying foreign assets, signaling it is comfortable with a weak currency.

Strategy for Exporters: Exporters shall sell 50-60 percent of their actual orders between 76.00-76.90. For remaining, they can maintain a strict stop-loss of 75.50 or costing whichever is high.

Strategy for Importers: Importers are suggested to keep a 1 to 1.5 months hedge cover and buy on dips between 74.80-75.30 levels.