Rupee at 73.5 per dollar: Will it appreciate or depreciate?

Updated : September 22, 2020 01:23 PM IST
Currently, at 73.50 we are standing in the middle of the rupee scale having equal reasons to appreciate and depreciate
The broader medium-term trend for the rupee remains on the stronger side, but the pair can surprise with a turn in the next 10-15 sessions
For new orders, one shall not get complacent and begin selling in tranches between 73.60-74.20 levels.

It’s had been quite a tiring week for the rupee as the volatility is back in the pair since last week. Nonetheless, it’s hovering within its near term range of 73.00-73.80 levels with slight aggression.

Currently, at 73.50 we are standing in the middle of the rupee scale having equal reasons to appreciate and depreciate, ironically with the same amount. Why did the rally that begun from 75.00 levels took a halt and the pair started swinging in the range?

Let’s understand the same through the factors which can be influential in driving the near term course for the pair.

Reasons why the rupee could move towards 74.50 levels:

• Geopolitical strains: It is our observation with the near past incidences, whenever a country faces geopolitical tensions, the rupee tends to depreciate. If we take the recent example, during the escalation of the tensions on LOC in 2019, the rupee had weakened from 70.40 to 71.60 but as the situation normalized, the pair became stable and strengthened back to normal levels within a couple of days. Meaning which, the erratic movement arising out of domestic geopolitical concerns has been witnessed to be short-lived. Presently too, the situation at LAC is on a knifes edge and slight friction between the two could also get the rupee on the weaker side.

• 40 Days to US Elections: As we nearing to the most awaited event of the year, sentiments are likely to remain swinging thereby building pressure on the global markets. As the markets had kept on unreasonably rising until September mid, now it’s likely that the flow of money into Emerging markets shall hold temporarily as investors might go for profit booking and seek safety in the safe havens like gold, US treasuries, and JPY.

• Trade Deficit: From a trade surplus of $0.8 billion in June 2020 quarter, India’s trade deficit widened in August as a rebound in exports flattened out and imports rose sequentially led by higher shipments of gold. The trade deficit stood at $6.77 billion compared to a deficit of $4.83 billion in July 2020. If the imports continue to rise and exports remain stagnant due to global economic slowdown, there is relatively less demand for the rupee leading to a loss in value of the rupee.

• Dollar Index: The dollar is trading lower against most of the major currencies for past couple of months. It has been confined to a 92.00-94.00 trading range since July end and has been trading sideways. However, in the short run, a technical bounce back due to safe heaven nature can be seen as the dollar index rose overnight by 80 pips yesterday amid renewed tensions about new pandemic lockdowns in Europe and UK after virus cases hit new record highs.

Reasons why the rupee could move towards 72.50 levels:

• RBI resuming with OMO’s: The 10-year yield had been rising amid the unpleasant retail inflation prints and the stand-off between central and state governments over revenue sharing. RBI had absorbed nearly 70 percent of the borrowing through its OMO’s in FY19. Back then, the center had borrowed Rs 5.7 trillion from the market. This year, the central government is likely to borrow  Rs 12 trillion from the bond market. Therefore, the need for OMOs has increased. Hence, the RBI has announced it would buy Rs 10,000 crore OMO to achieve the objective of bringing yields down to comfortable levels. This shall attract foreign flows in the debt markets, thereby extending support to the pair as RBI might not be able to buy dollars.

• Supportive Inflows: If seen, despite gloomy clouds hovering, India has managed to attract FII and FPI inflows, though marginal. So far in September, the inflow has been seen in both Equity and debt market summing to nearly $ 1.15 billion.

• Strengthening Chinese Yuan: The dollar-yuan pair has been consistently gaining strength and is trading below 6.80 levels. Despite persistent rift with the US, the currency has remained resilient throughout. As other EM currencies, in general, follow the trend of Asian giant and India being the next competitive place, the rupee is likely to remain stable to stronger for the next few sessions. 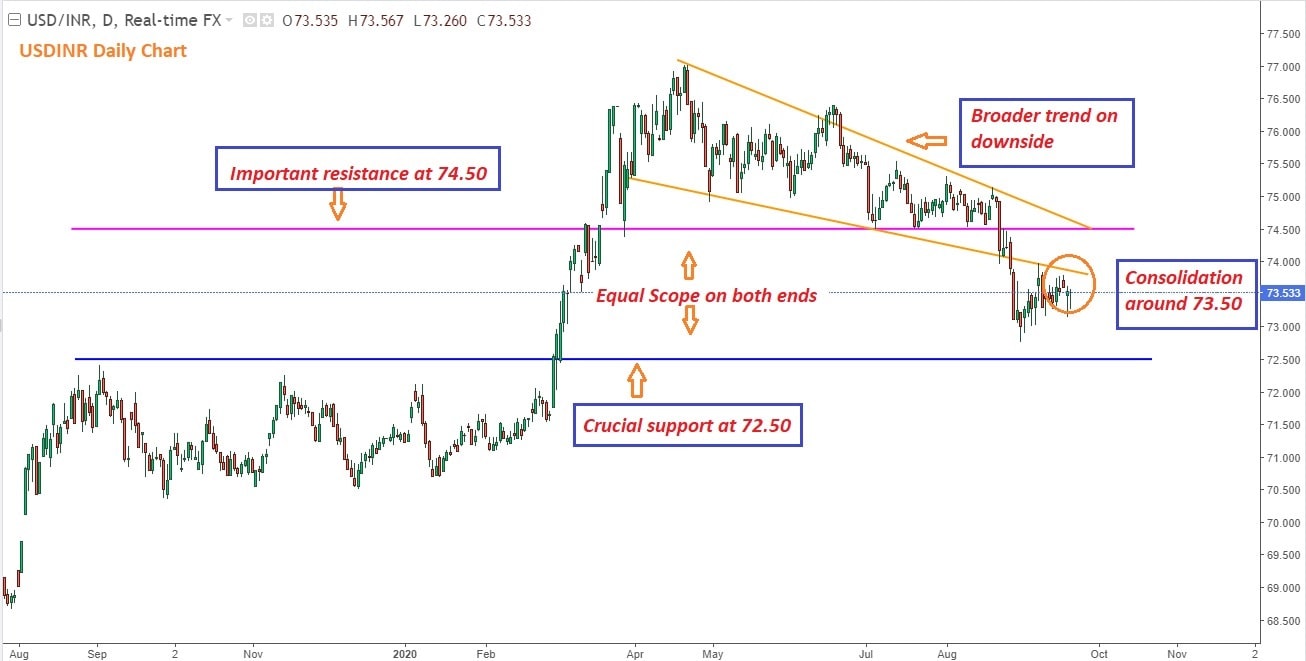 As seen above, the technical chart is replicating the same story as fundamentals having an equal scope of appreciation and depreciation. The pair is precisely in the middle of its crucial broader range of 72.50-74.50 levels having important support at 72.50 and resistance at 74.50 levels. Overall, the broader trend as seen is on the appreciation side but in the near term, the pair can test either of its crucial levels driven by the most influential factor. There is a 60-70 percent possibility that the pair might test 74.20 levels in the next few sessions and in the medium term, there is a 40 percent possibility that the rupee might again move below 73.00 levels.

When there is a state of dilemma, it is important to strategize than speculate. As mentioned, the broader medium-term trend for the rupee remains on the stronger side, but the pair can surprise with a turn in the next 10-15 sessions having equal reach on both the ends of the 72.50-74.50 range. Hence, it is advisable to have a structured process with a stop loss in place to ensure that a certain value is achieved irrespective of what happens to the market. Following an approach where a certain amount is hedged upfront be it exports or imports, and a stop loss is set to protect against a bad market, one will be able to achieve a decent average at the end of the day.

Thin Margin: For new orders, one shall not get complacent and begin selling in tranches between 73.60-74.20 levels. For open orders, it is advisable to maintain a stop-loss of 73.30 or cost whichever is higher. Overall, we suggest following a 70-80 percent hedge ratio.

Thick Margin: For fresh exposures, it is suggested to sell cautiously close to 73.70-74.20 levels. For the ones holding, are suggested to maintain a stop-loss of 73.20 and follow a hedge ratio of 50-60 percent.

It is advisable to cover payments within the next 15 days to 1 month on dips between 73.10-73.25 levels. To hedge more than a month, one can opt for at the money call option to keep the downside open.