Is Rupee on it’s way towards 73 per dollar?

Updated : August 26, 2020 02:46 PM IST
A lot of exporters would be surprised by this sudden and sharp move that rupee delivered after having been trading dead for a longer time
The nature of rupee suggests, the longer the pair trades range-bound, the sharper and stronger is the breakout.
With RBI’s change in stance in forex intervention coupled with the need to bring down bond yields, the rupee is likely to shift its trajectory on a stronger side.

It is rightly said, “Hope not, and better to anchor the ship at shores when we know clouds are becoming darker horizon.” And hence, it’s better to be proactive than to be reactive when it comes to hedging!

A lot of exporters would be surprised by this sudden and sharp move that rupee delivered after having been trading dead for a longer time. Well, there doesn’t seem anything to be surprised about as the nature of rupee suggests, the longer the pair trades range-bound, the sharper and stronger is the breakout. And this correction was a long time due.

Well, what intrigues is that this correction is merely on the back inflows that had hit the market today or there is something deeper to it. Whatever it is, rupee got a much-needed trigger to break past 74.50 levels. However, the trigger is not the inflow as the same has been persistently coming in the Indian markets from the beginning of the month and have reached nearly $6 billion so far; but it is the RBI’s change of stance as it refrained from buying dollars this time and let rupee shift its trajectory on a stronger side yet another time.

Why did RBI happen to change the stance? Possible, there are two major factors that might have triggered the change adding to what we mentioned in our previous reports.

· Rising Liquidity: There is rising excess liquidity into the financial system which is a threat for inflation that is already ticking higher. Adding more liquidity in the form of Forex intervention could have triggered the already rising inflation. Some episodes of offloading the forex kitty by RBI as did in the last week or halting the dollar buying intervention when further rate cuts don’t favour the present economic situation helps to solve the purpose. With RBI going slow in forex intervention to curb liquidity overload, there is more room for the rupee to appreciate.

· RBI managing rising bond yield: With RBI remaining silent in the last monetary policy and acknowledging the risk of stagflation, bond yields rose nearly by 39 bps to 6.22 percent. Contrasting to its behavior in April-June where it was intolerant about rising yields to minimize the cost of borrowings for the government; last week RBI not only accepted bids on higher yields but also exercised the over-allotment option to sell an extra amount of bonds, showing its comfort with high yields. This ensures that the balance sheets of Indian banks stay protected. The RBI is playing different roles to manage the debt of the government and maintaining financial stability. Amid rising yields, RBI yet again announced OMO’s worth Rs 20000 crore to intervene in the government bonds to cool-off yields as it did in the first week of July. If RBI continues to buy dollars and also conduct OMOs, it will create double rupee liquidity. Hence, RBI might reduce or halt its dollar purchases, thereby becoming more tolerant towards rupee strength.

Well, there are two possibilities for rupee hereon:

· The pair shall make a move towards 73.50-73.80 levels in absence of RBI intervention and the presence of FII inflows. If so happens, one needs to fasten their seat belts and might have to get aggressive in selling.

· Or the pair shall retrace back near 74.50 levels on the back of buying pressure and squaring off the short dollar positions in order to book profits. With this, one might consider themselves fortunate to have another chance to sell as there is tremendous pressure on the appreciation side.

Overall, with RBI’s change in stance in forex intervention coupled with the need to bring down bond yields, the rupee is likely to shift its trajectory on a stronger side. The next two-three trading sessions would be important for the Forex participants to gauge the RBI’s stance and behavior of the traders to determine the way forward for the rupee. If it's able to sustain below 74.50 levels, then levels close to 73.50-73.00 could be expected in months to come. All in all, with a broader trend on the appreciation side and flood of foreign inflows in the country, it is advisable to take any uptick as a selling opportunity. 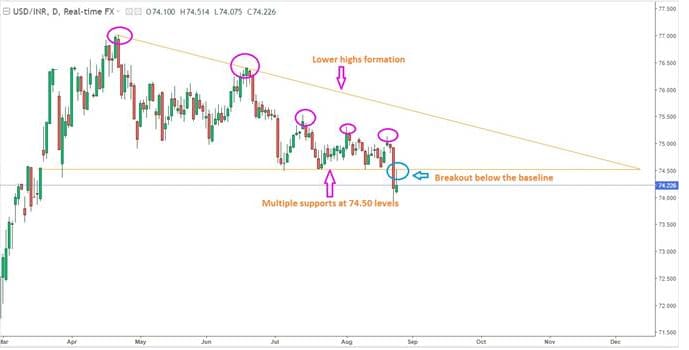 As seen in the above figure, the rupee has been making lower highs and lower lows formation since the month of April and it has broken symmetrical triangle pattern at its base after taking multiple supports near 74.50 levels. This indicates the pressure is on the appreciation side. Since this earlier all-time low turned support has been broken, the technical chart suggests that the pair is most likely to move near its next support zone of 73.00-73.50 levels in the near to medium term. However, in the short run a technical bounce back cum selling opportunity can arise near 74.40-74.50 levels out of buying pressure. As the primary trend for the rupee is on a stronger side, it is good to remain seller at every uptick seen and one can go slow in buying.

Strategy for Imports: Importers are advised to hedge via options by buying at the money call option in order to keep the downside open.