Rupee depreciates to 82.88 vs dollar

Rupee depreciates to 82.88 vs dollar 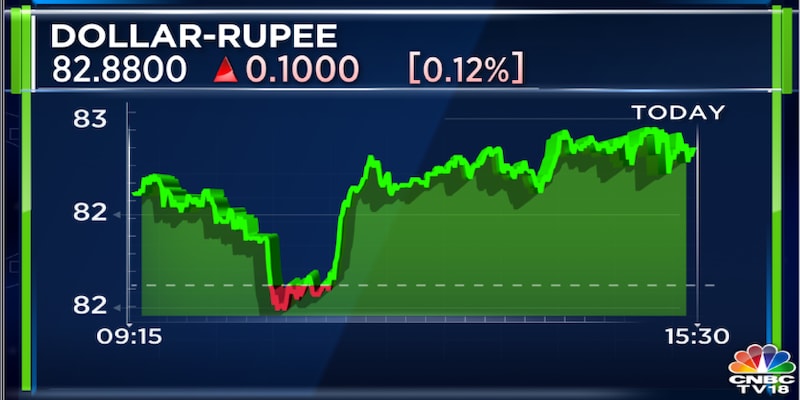 Rupee settled 10 paise lower from its previous close at 82.88 on Thursday amid rise in greenback and easing global crude oil benchmarks.

Rupee ended the session flat, as compared to its opening, on Thursday. Earlier, the domestic currency fell 10 paise from its previous close to 82.88 vs dollar on Thursday amid strength in greenback following the Fed announced a 75-basis-point hike in benchmark interest rates as widely expected. However, fall in global crude oil benchmarks kept the losses under check.

The dollar index — which measures the American currency against the yen, the pound, the Canadian dollar, the Swedish krona, the Swiss franc and the euro — was trading 0.5 percent higher at 111.8 at the last count.
Crude oil prices fell on Thursday following Fed's hawkish stance. However  supply concerns kept the downfall under check. Brent crude futures fell 0.5 percent to $95.6 per barrel at the last count. WTI futures were last trading 0.6 percent lower at $89.5 per barrel.
"So far rupee is trading tad bit stronger from its all time low, helped by resumption in the FII inflows which brought about 11000 crores in merely two sessions of Nov, as the sentiments across had improved. Well, the continuation of the same will depend on how RBI holds on to policy amid aggressive Fed," said Amit Pabari, Managing Director at CR Forex."Today we could see the RBI could intervene in the spot market to control volatility. Overall, we expect the USDINR pair to trade higher in a range of 82.00 to 83.20 levels and a breakout on either side will determine further course," he said.
Indian equity benchmarks BSE Sensex and NSE Nifty50 traded in the red on Thursday as Fed spooked global markets.
Catch latest market updates with CNBCTV18.com's blog
Check out our in-depth Market Coverage, Business News & get real-time Stock Market Updates on CNBC-TV18. Also, Watch our channels CNBC-TV18, CNBC Awaaz and CNBC Bajar Live on-the-go!