Updated : July 22, 2020 05:33 PM IST
The Indian rupee began to stabilise only after 2013, when the the Reserve Bank of India emphasised inflation-targeting regime under then-Governor Raghuram Rajan.
Two primary reasons behind rupee depreciation, as noted by the brokerage are high inflation and negative current account dynamics.

The Indian rupee began to stabilise only after 2013, when the Reserve Bank of India (RBI) emphasised inflation-targeting regime under then governor Raghuram Rajan. Despite the earlier measures, data indicates that the Indian rupee has already lost 44 percent since 1999, said UBS report.

The global brokerage firm pointed out that the rupee depreciation has been profitable to the USD-based investors. "Over the past two decades, Indian 10-year government bonds have commanded a 4 percent p.a. yield advantage on average versus comparable US bonds which have more than compensated US-based investors for the 2 percent–3 percent p.a. depreciation of rupee

against the greenback," said the report.

Therefore, this has stood out as a magnet for the investors seeking yield in a low interest rate environment.

Two primary reasons behind rupee depreciation, as noted by the brokerage are high inflation and negative current account dynamics.

In simple words, inflation means the rise in general prices of goods and services where a unit of rupee effectively buys less than it did in prior periods. Meanwhile, current account means a nation's transactions with the rest of the world.

The report explained that the inflation in India was stabilised at mid-single-digit levels from 1999 to 2004. This changed between 2005 to 2013, when the country saw an accelerating high single digit inflation/double digits. High inflation brought upon pressure on the Indian rupee, which was later stabilised by the RBI and then-governor Raghuram Rajan. 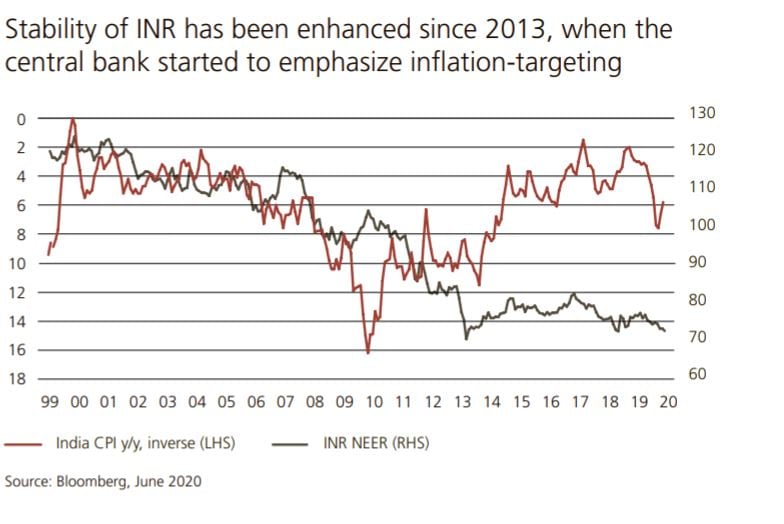 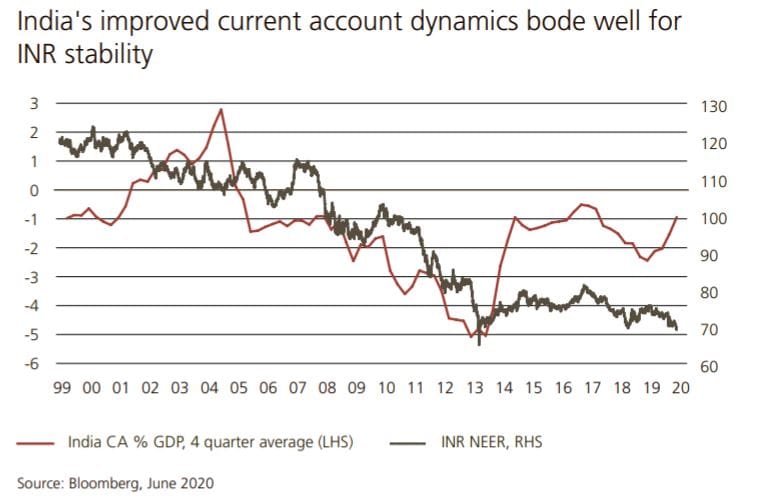 What's Ahead For The Indian Currency In The future?

UBS report highlighted that capital account flows will take over as a dominant trigger for rupee in the years ahead. "Assuming India’s hard-won stability in its current account and inflation dynamics can be maintained, we think investors can be optimistic on the rupee’s outlook for the decade ahead," said the brokerage.

It further pointed out that India's efforts to become a regional manufacturing hub as well as further opening up of India's financial markets to the foreign investors should help rupee expanding.

Choice Broking in its research report also indicated that the Indian rupee will remain strong in the post COVID-19 world.

"Economist & market experts were expecting rupee depreciating to 85/$ and some were fearing to touch Rs 100/US$ in the near term. Contrary to market participants’ forecasts, rupee has shown resilience and recovered to Rs 74.5/US$ in the first week of July while outperforming other emerging

nations currencies by a wide margin," said the brokerage.

According to the brokerage, factors that are contributing to the rupee resilience are- preferred destination for global investors, India's improving external position, massive build up in foreign reserves and stable macro-economic fundamentals.
Tags currency inflation RBI rupee US Dollar