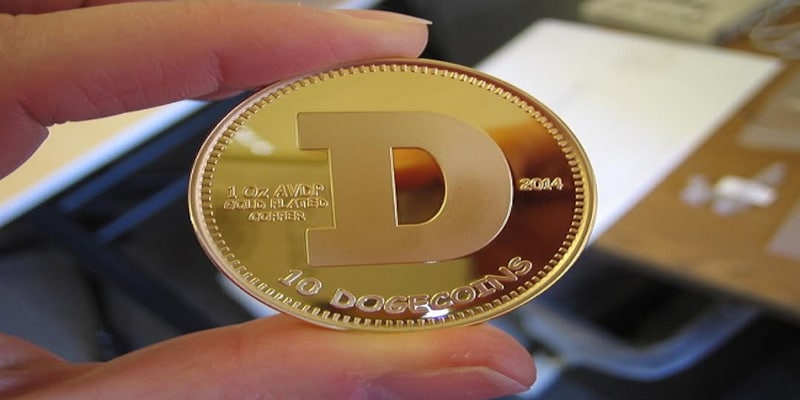 Dogecoin now ranks among the top five most valuable cryptocurrencies in the world with an overall value of over $50 billion, thanks to last week’s 400 percent market rally, according to CoinMarketCap.com data.

Dogecoin, the meme cryptocurrency, which started as a joke on social media, is turning out to be a serious affair.

Dogecoin now ranks among the top five most valuable cryptocurrencies in the world with an overall value of over $50 billion, thanks to last week’s 400 percent market rally, according to CoinMarketCap.com data.

Dogecoin touched the high following a cryptic tweet by Tesla and SpaceX Chief Executive Officer Elon Musk on Thursday. Musk tweeted ‘Doge barking at the moon’ while sharing a painting of a Spanish artist, referring to the cryptocurrency Dogecoin.

Friday morning noted a jump of 112.89 percent in Dogecoin value in the previous 24 hours, as per Coinbase, with the value of the cryptocurrency rising to $0.29.

This came two days after it hit the milestone of 10 cents on April 14.

Dogecoin is rallying at $0.32 today, April 21 (at the time of writing), even as it has declined by 21.89 percent from its highest value of $0.40 in the last 24 hours, as per CoinMarketCap. It has experienced a 1,421 percent increase in trading volume, according to the crypto currency data website.

Dogecoin has now become even bigger than the market cap of Ford Motor Company and Kraft Heinz and nearly equal to Twitter Inc, reports mention.

Though there is no comparison between these blue-chip stocks and Dogecoin, this underscores the boom in cryptocurrencies that has taken Wall Street by storm.

On the other hand the values of other cryptocurrencies are declining. World’s largest cryptocurrency, Bitcoin, has fallen for five straight days, back to $55,000.

Dogecoin prices climbed as fans rallied behind the #DogeDay hashtag to celebrate April 20 (4/20), known as a day for smoking marijuana in cannabis culture, reports mentioned.

The social media frenzy to push the prices of the meme cryptocurrency started on Reddit where a user recently posted, “$1 is inevitable... We can mother heckin (sic) do this.” It soon became a top trend on Twitter.

Dogecoin is a digital coin used for e-transactions. Doge is a reference to the ‘doge’ meme and has a picture of Shiba Inu, a breed of dog, on it.

Launched in 2013, when Doge meme’s popularity was at peak, Dogecoin was initially created as a joke by software engineers Billy Markus and Jackson Palmer.

Palmer, made a joke combining the meme with much-talked-about cryptocurrency, hence came into being the Dogecoin. He then bought Dogecoin.com domain and uploaded a photoshopped coin with an image of Shiba Inu.

The website said, “If you want to make Dogecoin a reality, get in touch.”

Soon, Markus from IBM got in touch with the website and set Dogecoin live.

The cryptocurrency has recently emerged as one of the favourites of tech giants, social media influencers and bigwigs across industries. Musk, who is seen as one of the most ardent supporters of Dogecoin, had tweeted on February 4, 2021, "Dogecoin is the people's crypto." The tweet sent its value higher by 75 percent.

Dogecoin can be exchanged for goods and services at platforms where it is accepted. It can also be traded for fiat currencies like the US dollar.

Since its creation, Dogecoin has also been used to donate money to charities, including a clean water project in Kenya, Doge4Water.

But, the value of Dogecoin is volatile like other cryptocurrencies as it is not backed by any government.

The current market capitalisation of Dogecoin is about $16.9 billion.

The peak price of Dogecoin in 2018 was around two cents, before it crashed along with the rest of the cryptocurrencies. In early January this year, each token crypto was worth less than one cent. But by late January, the value of Dogecoin shot up to 7.5 cents, before sliding down to 2.5 cents.