According to a report by Emkay Securities, the disinvestment target of about Rs 1.05 lakh crore could face some challenges if weakness in the market continues, restricting the ETF route (for instance, the Bharat-22 index is down 14 percent in three months).
In this context, there are growing expectations that the government may avoid the market route to raise funds and rather dig into the cash balances of PSUs through buybacks, the report added. Overall, buybacks can accrue proceeds of Rs 29,500 crore to the government in FY20 as against Rs 10,700 crore in FY19, it further said.

"However, an even extreme possibility -- a strategic stake sale (privatisation) -- is also being discussed in the media. Though we cannot rule out the probability of this theory given fiscal constraints of the government, political hurdles are high on such a route," Emkay noted.
Among the larger PSU stocks, a rise in the government’s buyback activity could be best played through Oil India, Bhel, ONGC and Nalco, the report said, adding that the least to benefit could be for Coal India and Concor. 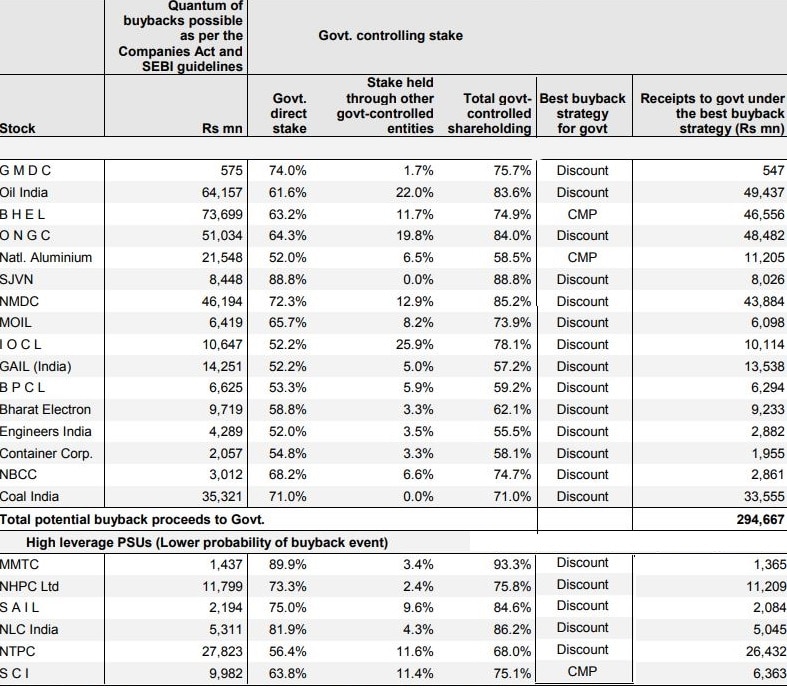 In the report, the brokerage has focused on stocks gaining from a possible PSU buyback wave. Finance Minister Nirmala Sitharaman’s budget day announcement of the inclusion of all the stake held by government-controlled institutions into government shareholding makes a material difference to the conclusions in this piece, it explained.
It prefers PSU stocks that have a decent cash balance and the room to lever
up and a reasonable room for the government to cut stake (including quasi-government shareholding).
If the government opts for the buyback route, it has a choice of buying back at the current market price and thus sharing the proceeds with minority investors or announcing buybacks at a discount and being the sole party tendering in the buyback.
In general, the PSU stocks could see some relief as expectations of buybacks grow, it concluded.
Disclaimer
: CNBCTV18.com advises users to check with certified experts before taking any investment decisions
Check out our in-depth Market Coverage, Business News & get real-time Stock Market Updates on CNBC-TV18. Also, Watch our channels CNBC-TV18, CNBC Awaaz and CNBC Bajar Live on-the-go!