Foreign portfolio investors have emerged net buyers of Indian shares for a total of six days so far this month. Could it be an early sign of a reversal in the trend seen in the flow of money over the past more than nine months? Could it be an early sign of reversal in the trend in the past more than nine months?
Sustained selling by FPIs since October 2021 has kept Indian equity benchmarks from revisiting the last of their all-time peaks.
Many experts are hopeful of more prominent signs of a shift in the trend before spelling out good news for the Street, where although the Nifty50 has recovered some ground in the last few weeks, it still lurks in the correction zone.
A stock or index is said to be in correction when it falls back at least 10 percent from its recent peak.
Market expert Ajay Bagga told CNBC-TV18 one cannot say whether the recent change in flows will sustain or whether the worst of foreign institutional investor selling is behind.
"Peak dollar and peak US yields would lead to that reversal... Right now, it’s just a pause in a nine-month trend," he said.
Others voices on the Street are more optimistic. "There is a clear change in FPI action in the market. The relentless selling by FPIs which started from October 2021 appears to be over," said VK Vijayakumar, Chief Investment Strategist at Geojit Financial Services.
"They have significantly slowed down selling in July and have even turned buyers for six days in July, particularly during the last few days when they continuously bought," he said. 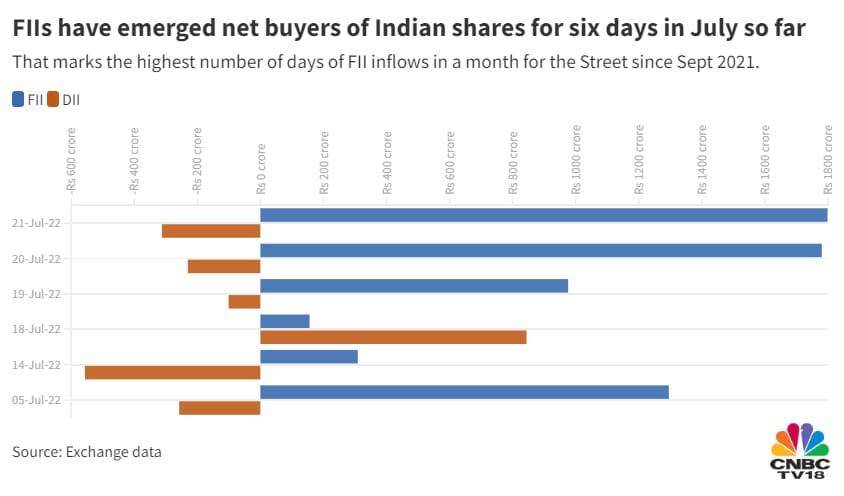 Analysts also feel the focus is back to fundamentals, with the corporate earnings season gathering steam.
"This is a market where you buy into pessimism. The earnings for banking and financial services for last 3-4 quarters have been good, and valuations for most banks are attractive," Krishna Kumar Karwa, Managing Director at Emkay Global Financial Services, told CNBC-TV18.
Vijayakumar expects the trend to continue for the near term, but believes "a lot will depend on the news from the US relating to the economy and markets".
The Fed is likely to announce a key decision on interest rates this week. The US central bank is widely expected to follow up its biggest hike since 1994 with another 75 basis points.
Back home, the RBI has raised the repo rate — the key interest rate at which it lends money to commercial banks — by a total 90 basis points since early May. Its next scheduled policy review is due in August.
Catch latest market updates with CNBCTV18.com's blog
Check out our in-depth Market Coverage, Business News & get real-time Stock Market Updates on CNBC-TV18. Also, Watch our channels CNBC-TV18, CNBC Awaaz and CNBC Bajar Live on-the-go!