Commodities have a mixed 2022 — crude starting to simmer, nickel and lithium shine brightest

Commodities have a mixed 2022 — crude starting to simmer, nickel and lithium shine brightest

WTI and Brent crude prices are closing nearly 5-10 percent higher this year, with the latest gains coming on the back of Russia's decision to cut output by nearly 5-7 percent in the first quarter of 2023. But coal emerged the clear winner in the energy pack.

Its been a mixed year for the commodities market with fast-changing geopolitical situations like the Russia-Ukraine war and the COVID-19 cases rising and the subsequent lockdowns in China. Supply has been impacted across the board and the deep fluctuations in energy and metal prices reflect that as the world tried to come out of the pandemic at large.

With the world also moving at top speed towards electric vehicles to curb the pollution menace and thus help fight the impending climate crisis, battery components such as lithium and nickel outperformed the other metals to shine the brightest.
Energy
The year 2022 is ending on a high note for WTI and Brent crude, with both closing the year nearly 5-10 percent higher on the back of Russia's decision to cut output by nearly 5-7 percent in the first quarter of 2023. The prices had declined by 45 percent from the peaks in the course of the year before this current uptrend. Russian oil is trading above $80 per barrel. Gas prices also took divergent paths this year. In the US, gas prices gained by 28 percent because of record exports, its Arctic winter, and inventory decline. However, TTF and European Union gas prices have declined as Europe, on average, right now has 83 percent of its capacity of gas holdings.
The best performance in the energy pack clearly came from coal which fired up 138 percent due to under-investment in the sector and higher electricity prices driving a large section of people to turn to coal. The first half of 2023 is expected to mirror this.
Metals
Copper prices reached an all-time high this year before slipping and aluminum climbed down 35-45 percent from its peaks, ending the year 15-16 percent lower. Zinc prices saw an extreme decline on the back of weaker demand for galvanisation. Zinc inventories in Shanghai and LME were at record lows. 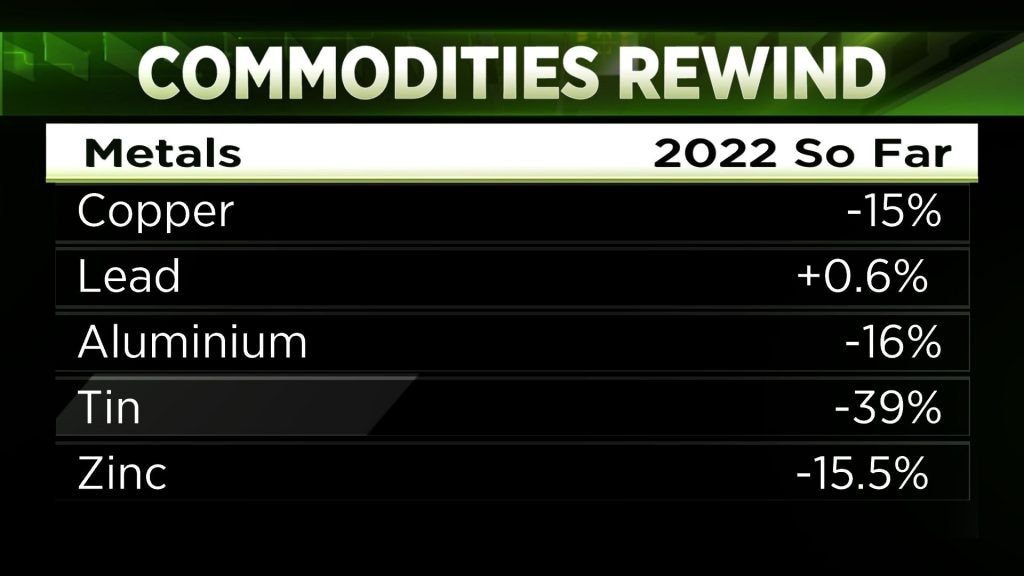 The story of the year clearly belonged to nickel — $100,000 per tonne before it was forced down to $48,000 by LME, two days of suspension, and a whole lot of surveillance work. Even with all of that, nickel is closing the year with 45 percent gains.
Also Read | Deepika Padukone to Priyanka Chopra, celebs who started their own brands in 2022
It is a negative closing for steel and iron ore. Last year, cobalt prices gained by 80 percent while this year it has seen profit taking. Lithium's trend of best gains continued, the much-in-demand metal closing 109 percent higher on the back of weaker supplies and strong demand from the electricity and renewables sectors.