Updated : January 05, 2021 01:45 PM IST
The US Fed has effectively taken a rate hike off the table for 2021 and has no plans to curtail its $120 billion in monthly asset purchases.
Additionally, the federal budget deficit is expected to will continue to skyrocket to $4 trillion leading to further dollar debasement.

After a breath-taking year for the commodity markets, precious metals are set for further gains in 2021. So far, the pandemic triggered piling of safe havens by investors looking to protect their wealth. Safe heaven demand, alongside supply deficits, pushed gold and silver prices up by almost 25 percent and 47 percent, respectively.

Traditionally due to its safe heaven nature, gold began to rise as economic growth showed signs of slowing since 2019, but the pandemic accelerated the rally and in August prices touched a record high of $2,072.50 leading to achieve our previous targets.

After that, gold began its consolidation journey and then again started rising since December’20, where we had suggested to buy. As we hit our first target in gold at $1,930 that we mentioned in our last report, here is the overall outlook and the factors that would ride gold in 2021 towards its next target.

Four major indicators are hinting an extension in the gold prices:

Inflationary Pressure: In the months ahead, the setup for a huge inflation outbreak in the real economies for major countries is clear and present leading to a breakout in the precious metals imminent. The US Fed has effectively taken a rate hike off the table for 2021 and has no plans to curtail its $120 billion in monthly asset purchases.

Additionally, the federal budget deficit is expected to will continue to skyrocket to $4 trillion leading to further dollar debasement. It seems like until an above 2 percent inflation objective is achieved, the Fed will no longer pursue price stability and instead, it shall allow prices to run hotter before it begins tightening. Hence, with all of this together there cannot be a more bullish environment for gold as the one we are in at present.

Gold to M1 (Monetary Base) Ratio: It is the ratio of a measure of global monetary base versus the amount of official gold in the world. M1 includes the most liquid parts of the money supply as it contains cash i.e. physical fiat currency notes, coins and other liquid financial assets that can be quickly converted to physical cash. It is believed that more money relative to a fixed supply of the yellow metal leads to a higher gold price and vice-versa.

The monetary base roughly matches the size of the Fed’s balance sheet, which indicates the level of new money creation required to prevent deflation. This monetary base has increased from 3.97 trillion in March to 5.73 trillion up till Dec’20. The ratio is currently running close to all time low around 0.41, indicating a favourable run for gold in the coming future as M1 has far outgrown the supply of gold.

Gold Silver Ratio: It can be used as a way to determine which commodity of the either is likely to rise from a certain level. Theoretically, a higher ratio i.e. for instance, above 50 means silver is undervalued compared to gold and vice versa. However, the same levels are rarely seen and practically, a ratio at 50 or below was in 2011 when the ratio had fallen to 32.62 levels. Overall, a ratio close to 70 or little below has also invited gold bids in the past.  Presently, the ratio is trading at 70.90 which has also been crucial support. Hence, from here there the indicator shows that gold prices shall rise.

Gold holdings in SPDR: SPDR Gold Shares are intended to offer gold investors a platform to buy and sell gold in the gold bullion market without taking physical delivery of gold through a regulated stock exchange. While demand for physical gold was hammered due to Covid-19 led shutdowns, investment demand surged in the world's largest gold-backed exchange-traded fund, SPDR Gold Trust as reflected in the holdings which recorded its biggest yearly gain since 2009 at about 30 percent. Currently, the SPDR Gold Trust, said its holdings rose to 1,170.74 tonnes on Thursday indicating the never tiring demand in the paper gold. 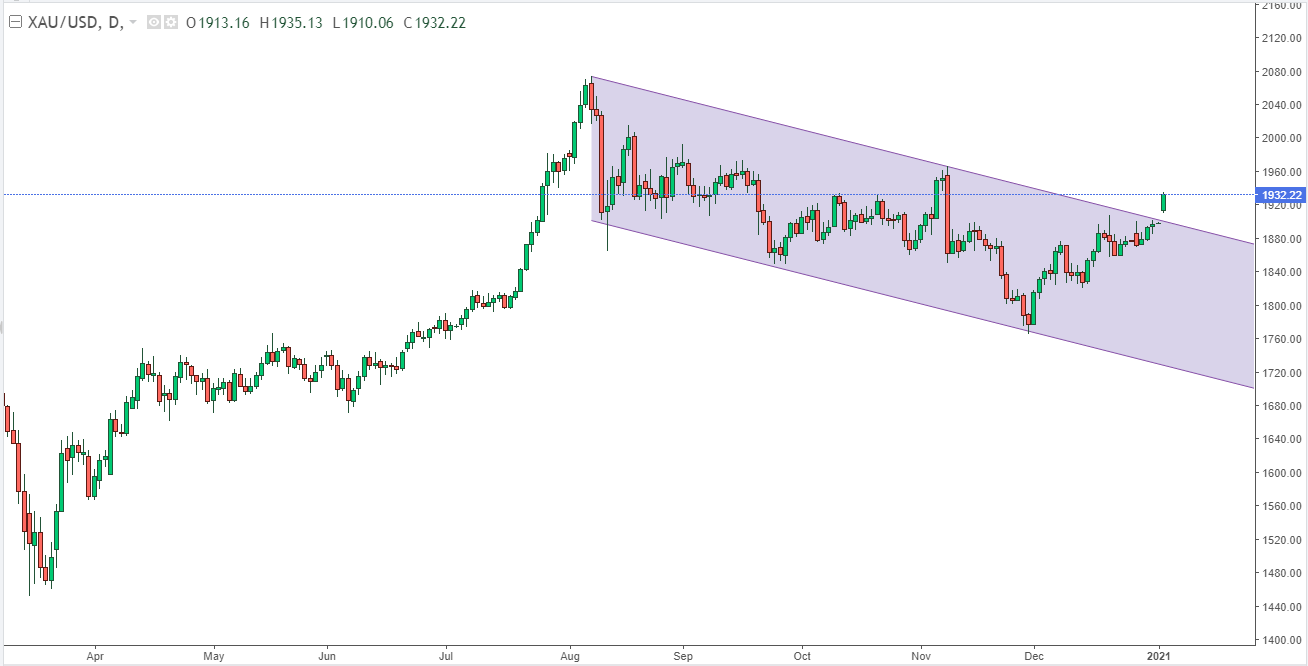 As seen above, gold has given a technical breakout on the upside of the descending channel pattern that was formed since August’20. The breakout suggests that the yellow metal is likely to rise higher from the prevailing levels.

Considering the above-mentioned fundamentals and technical, the overall trend for gold remains bullish. Hence, gold is likely to make its first move close to $1,980 and  $2,050 can be seen eventually.