Updated : June 28, 2019 01:49 PM IST
US-China trade war is one of the primary reasons for distress among major economies.
Domestic gold prices are holding firm above the breakout levels of Rs 33,400.

Gold prices witnessed a lot of ups and downs in May. It started by hitting a low of $1,267 (spot) but after the Fed policy statement, gold rose to its highest level in six years. Uncertainty related to trade war is keeping gold supported on lower levels and after months of broad consolidation, prices have finally broken out of the range. Volatility within wide range was high and increased uncertainty could still keep investors on the edge. It was surprising to see that metal did not react to uncertainties hovering in market; in fact dollar was a more preferred safe-haven asset than gold. In the recent past, US President Donald Trump has continued to show his ferociousness on other countries to prove who is the mightiest of all and make others bow.

Rising concerns of global economic slowdown and weak economic numbers forced Fed to be a dove instead of a hawk. The Fed chairman has decided to keep door open for rate cut in the near future and dovish outlook also kept the greenback under pressure. The central bank as of now has decided to maintain a status quo and with inflation forecast also getting trimmed chances of rate hike by the Fed has totally eroded. Market participants are now factoring in a couple of rate cuts in this year suggesting that the Fed is one of the new entrants in the group of Dovish central banks. All the major central banks including ECB, BOE and BOJ are holding a dovish stance.

US-China trade war is one of the primary reasons for distress amongst major economies. Even though the trade war between the US and Mexico has started to ease, uncertainty is keeping most market participants on the edge. Trade war between the US and China has been going on from a long time and as it escalates, it helps gold bulls to take charge. One of the most strained and what seems like a never ending trade war between two power nations the US and China had few updates for the market recently. In a way to prove his point Trump announced to impose import tariff on China’ goods worth $300 billion. But all the chaos surrounding the meeting settled after Trump said that he is looking for an extended meeting at G20 with the Chinese president suggesting that the uncertainty related to trade war could start to settle down. The G20 meet could be game changing event not only for the US but also for how the trade war aspect could intensify for other economies, which are in a tussle with the US on a similar issue. 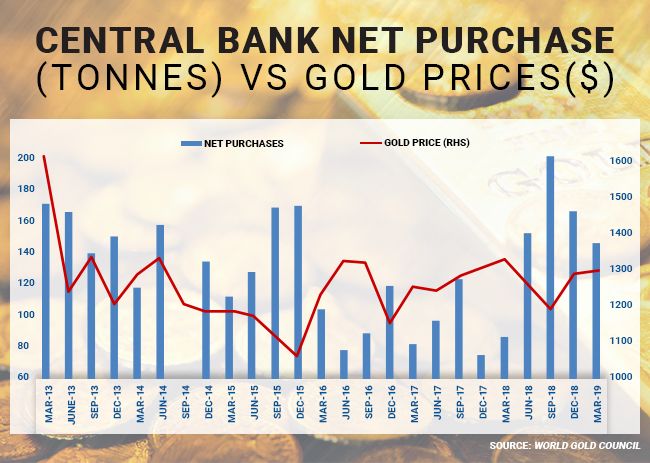 Central banks have started to accumulate gold and that could keep yellow metal prices supported on lower levels. Major central banks have been consistently showing a lot of activity in terms adjusting their reserves. Russia and China, one of the major buyers following their past trends, maintained the consistency of buying gold. Russian central bank bought another 15.5 tonnes of gold in April, bringing their total reserve up by 0.72 percent to 2183.46 tonnes. PBoC bought 15.6 tonnes of the precious metal in May taking its total gold reserve to 1,916 tonnes, this is the sixth consecutive month of gold buying by China.

Data released by one of the largest gold ETF funds suggest an increase in holdings by approx. 20 tonnes in June taking the total holdings to 764.10 tonnes as compared to 743.21 tonnes at the end of May. CFTC positions suggest that speculators remain net long in May and continued net long positions would restrict major downside for the metal.