The UK government on May 26 announced a 25 percent windfall tax on profits of oil and gas companies which seems to have spooked the oil and gas stocks with ONGC leading the downfall.

The UK government yesterday (May 26) announced a 25 percent windfall tax on profits of oil and gas companies with crude surging over 50 percent in 2022 so far.
There is speculation in the Indian market that similar steps can be taken back home too as it’s looking at additional revenue mobilisation measures to offset revenue loss due to recent excise duty cuts, higher fertiliser subsidies etc.
This seems to have made investors nervous and it’s being reflected in the stock movement of all the oil and gas majors like ONGC, Oil India, Reliance and Vedanata. 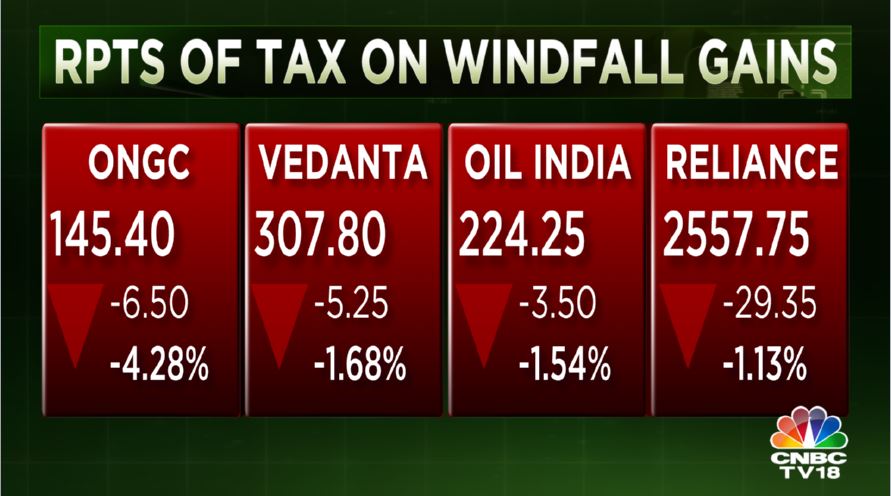 Oil and gas companies are trading in a cut of 1-5% with ONGC leading the down move.
As per analysts, every $10/bbl change in net oil price realization, changes ONGC’s FY23E earnings by Rs 7.10/share (10.9 percent, Oil India's earnings by Rs 7.60/share (7.7 percent).
It is noteworthy that in 2022 so far, crude has seen a gain of over 50 percent (From $78 on December 31, 2021, to $117 on May 26, 2022)
The European Commission this month proposed new sanctions against Russia for invading Ukraine but said they require the unanimous support of all 27 bloc member states. Landlocked Hungary, which is heavily reliant on Russian oil imports via a pipeline, has so far blocked them.
OPEC+ is set to stick to last year's oil production deal at its June 2 meeting and raise July output targets by 432,000 barrels per day, six OPEC+ sources told Reuters, rebuffing Western calls for a faster increase to lower surging prices.
(With Reuters inputs)
(Edited by : Abhishek Jha)
Note To Readers