Edible oil prices rise: Factors at play and how govt action is impacting it, explained

Edible oil prices rise: Factors at play and how govt action is impacting it, explained As per the data from the trade body, Solvent Extractors' Association of India (SEA), the average price of crude palm oil at Indian ports was $1,173 per tonne in April 2021 compared to $599 a year ago.

The price of edible oil rose to 10-year highs in May 2021 as the monthly average retail price of cooking oils surged over 60 percent in a year, further troubling the consumers already reeling under the economic and health distress following the coronavirus outbreak.

A year later, however, the government is insisting that prices have started to soften as domestic demand and global rates fall. Domestic edible oil prices mirror international prices as over two-thirds of India's edible oil demand is met by imports.
The price rise
As per the data from the trade body, Solvent Extractors' Association of India (SEA), the average price of crude palm oil at Indian ports was $1,173 per tonne in April 2021 compared to $599 a year ago. Domestic soy oil prices have also more than doubled in the past year.
According to government data, retail prices of groundnut oil rose 20 percent from June 2020 to June 2021. Mustard oil rose by nearly 50 percent, and Vanaspati oil prices surged 45 percent. Prices of Sunflower Oil and Palm Oil surged nearly 60 percent, each. 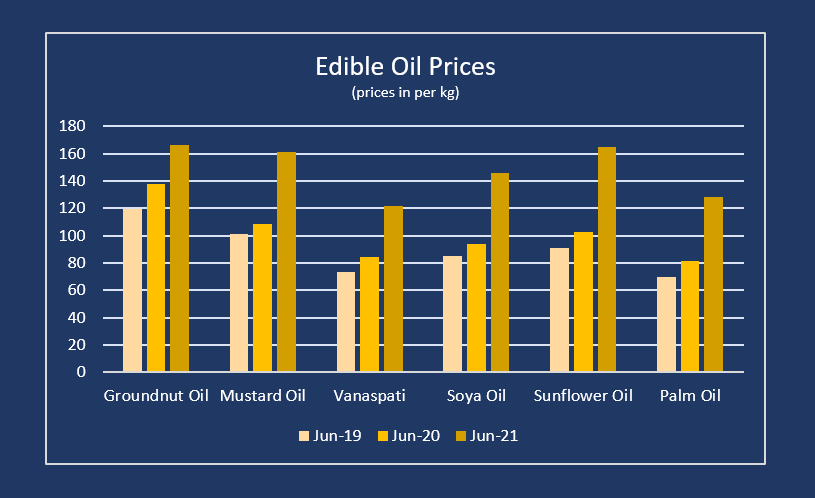 Comparison of price rise in June 2019, June 2020, and June 2021
The reason behind price rise
India imports 15 million tonne of edible oil annually and the domestic production is only 7.5-8.5 million tonne. Therefore, domestic oil prices follow international prices. In recent months, the prices of edible oils in international markets have jumped sharply.
Crude Palm Oil: Palm oil constitutes over 40 percent of India's total edible oil consumption. It is also the third-largest imported commodity after crude oil and gold. In 2019, India imported 9 million tonne of palm oil. This demand is met by Malaysia and Indonesia — the two countries that account for 85 percent of global production. However, in the months following the coronavirus outbreak, these countries faced a chronic labour shortage.
Malaysia relies on foreigners — people from Indonesia and Bangladesh — for 70 percent of its plantation workforce. Due to the outbreak, thousands of people left the plantations, against the usual 2-3 percent that leave every year. This massive outflow of workers pressurised the industry.
Sunflower Oil: India imports nearly 2.5 million tonnes of sunflower oil from Russia and Ukraine. These two countries produce nearly 50 percent of the global sunflower oil. But in recent years, both countries have witnessed drought-like conditions, thus impacting sunflower oil production.
Soybean Oil: Brazil is the top Soybean exporter and like Ukraine and Russia, it is also battling with dry weather conditions. Farmers cannot plant Soybean in such dry weather conditions, so they are biding their time. Meanwhile, sensing the dwindling production, China began hoarding supplies of oil to feed its massive population.
Further, the global and domestic demand for edible oil has risen in the last few months despite the COVID-19 pandemic. And the countries battling labour issues, the impact of La Nina, and export duties could not keep up.
The price rise was more concerning in India as the prices in the country rose more than proportionately as compared to the international price rise.
The current scene
The government last week said prices of cooking oils have started to soften due to a fall in global rates and lower domestic demand.
Last Friday, the union food secretary said there is a declining trend in the edible oil prices as per the futures market rates. "Prices are softening every week. There is a declining trend. Even the futures market prices are showing a declining trend," he said.
Further, the government mentioned that the demand for cooking oils has come down by 15-20 percent because of the pandemic.

Edible oil prices as per futures market
What does the future hold?
Trade body SEA has suggested a couple of steps to the government to curb the price rise. One, it suggested, the government must reduce duty only after the Kharif oilseed planting season is over. This would help ensure that the authorities don't end up sending negative signals to the local oilseed farmers. It has asked the government to supply edible oils at subsided rates via ration shops.
It had also suggested the government curbs speculative trade in the agri-futures market.
The government is considering reducing import taxes on edible oils, per a Reuters report. India levies a 32.5 percent tax on palm oil imports and 35 percent on soybean and soy oil. The tax reduction could help lower local prices and boost consumption.
The government will make a final decision to cut taxes sometime this month.
However, some experts are against cutting import duties. They argue that the tax cut can only help overseas suppliers and discourage farmers from expanding oilseed acreage, a consumer affairs official told Reuters.
The government had reduced the basic customs duty on crude palm oil on November 27 to 27.5 percent, but to no avail.
How do rising food prices affect India?
For one, an average Indian consumes 19 kgs worth of edible oil each year. But, a disproportionate rise in the price of edible oil wouldn't hit consumers' pockets just from one direction.
Rising prices of edible oil impact restaurants, cosmetic companies, and consumer companies. So when the oil prices surge, your restaurant bills, perfumes, and soaps become costlier too, a Finshots report said.
(Edited by : Jomy Jos Pullokaran)
Check out our in-depth Market Coverage, Business News & get real-time Stock Market Updates on CNBC-TV18. Also, Watch our channels CNBC-TV18, CNBC Awaaz and CNBC Bajar Live on-the-go!