homemarket Newscommodities NewsCorrection in Gold isn’t over yet; don’t be in the rush to buy!

Correction in Gold isn’t over yet; don’t be in the rush to buy!

Gold rally that had picked up the pace in March was settled in August and since then, the yellow metal has remained more or less flat.

Gold rally that had picked up the pace in March was settled in August and since then, the yellow metal has remained more or less flat. The rally from March to August was mainly because gold is been used as a funding asset before the US Election takes place. Also, as the US congress had passed Coronavirus Aid, Relief, and Economic Security Act, gold picked up the rally.

How situation in Turkey might affect Indian companies and trade

Off lately, gold has been out of focus after it peaked in August at $2075 per ounce post which started declining and began making lower highs.
In our last report, we had mentioned that gold is bullish before the US elections and the final target was met in the following report. Since the prices had rallied to new highs, it’s the time for further consolidation.
Since the gold had outperformed and the countdown has begun to the US election, will the risk rally gather pace or it’s the time for further consolidation?
Well, this time it seems like whatever rally had to come, got its move until August and the due correction has not ruled out so far.
As per the recent event, President Trump was tested positive for the COVID-19 in the last week and yet gold being the perceived safe haven, couldn’t immediately catch a buying interest. If gold cannot rally instantly on this news, then what will get it going? On the other side, correction in the gold can extend in the near term before it resumes long term bullish trend given below mentioned points:
Profit-taking before Election: Gold had rallied by nearly 43 percent from March levels around $1451 per ounce to $2075 in August. At the current spot of $1900, yet gold is valued by nearly 31 percent higher from the March low which is yet a significant profit to short-term and long-term investors. Since gold had been on a persistent rally and as we near to the dramatic event of the year, investors would likely remain sideways and do profit booking before the market comes up with any further surprises. Hence, the precious metal can extend the losses further amid profit-taking before it attracts long term buying interest.
Discrepancy in Stimulus: Apparently what excites the gold investors to help gold get its bull run is another US economic stimulus. Investors in gold remain trapped in their addiction to relief money as whatever money is available free of cost, they tend to allocate that fund in safe heaven. With the initial $3 trillion from the relief fund having exhausted by the second quarter, more relief seems needed and gold bulls look waiting for the same. Since the successive relief package is locked into a standstill with the same being proved disputable ahead of the presidential election; the resumption of the gold rally seems difficult. Gold will become more attractive to investors if policymakers step up and pass a stimulus package, or prices will fall too much lower levels that will be attractive for long-term investments.
Second Round of Lockdowns: Generally, lockdowns are bullish for gold because they reduce the supply of real goods and services and encourage money printing from central banks at the same time. The UK is already under a comeback of severe lockdown restrictions, and the EU looks likely to follow soon. This year, the March lockdown initially took down all asset prices including gold, and later brought a powerful rally in the gold prices taking it to an all-time high. The next lockdown can have similar consequences for the gold price, first bringing it down in the near term, followed by money printing, which could then resume gold rally in the medium to long term.
Technical Aspect: 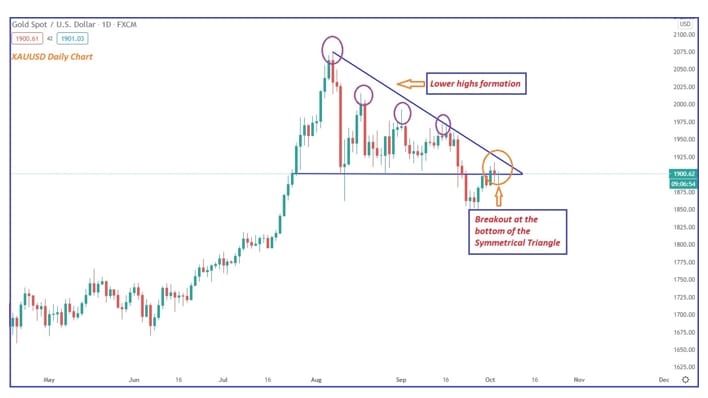 As seen above, gold has broken the symmetrical triangle pattern at the base near $1900 levels. Also, the metal has been making lower highs. Since the triangle is broken at the bottom, the pattern suggests that gold ill further move southwards close to $1832 levels where it is likely to take support. However, the move will be negated if gold moves above $1925 levels.
Outlook:
Considering the fundamental and technical aspect, entering into a fresh gold buying position is not advisable until the election results are out as the metal could fall near $1832 levels. One can invest in gold post elections for a longer-term perspective.
Strategy (Near Term): In dollar per ounce: Sell below $1,900 for a target of $1,832. (Stop Loss: $1,925)
In Rupee per 10 grams: Sell below Rs. 51500 for a target of Rs 47,500 (Stop Loss: Rs 53,000)
For investors: It is advisable to hold for buying gold with a long term perspective. Investors can enter into fresh buying once the prices fall close to Rs 47,000 per 10 grams.
-Amit Pabari is managing director of CR Forex Advisors. The views expressed are personal.
-Click here to read more articles by the author
(Edited by : Pranati Deva)
Check out our in-depth Market Coverage, Business News & get real-time Stock Market Updates on CNBC-TV18. Also, Watch our channels CNBC-TV18, CNBC Awaaz and CNBC Bajar Live on-the-go!