The price action and fundaments suggest that Gold is on its mark to set new highs.

It is rightly said that “Borrowers will default, markets will collapse, but gold will skyrocket.” The latest momentum in gold proves the quote right. In the follow up to our previous report on gold, the price action and fundaments suggest that the yellow metal is on its mark to set new highs. 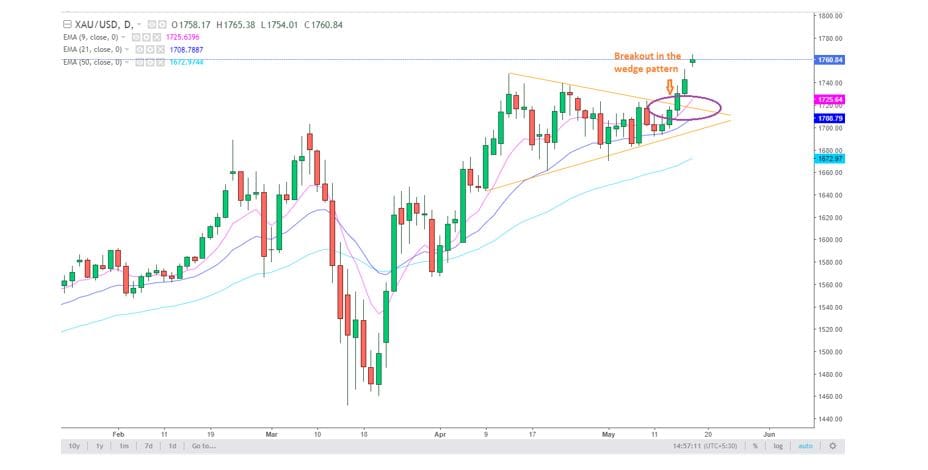 As seen from the above chart, gold has broken a wedge cum symmetrical triangle pattern on the daily chart in the last week. XAU/USD is currently trading above all major Daily Exponential Moving Averages. A breakout in the above pattern suggests that the price will make its move towards $1805 levels in the first place and a breakout above it will pave way for the previous all-time high of $ 1910 levels. However, a pullback below $ 1690 shall void the uptrend in the near future.
Summing up the above technical and fundamentals, it hints a clear indication to a sustained rally in the gold.
Trade call
In $ per ounce: Buy for T1: $ 1810 ; T2: $ 1910 and final $ 1950 (Stop Loss: $1705)
In Rupee per 10 grams: Buy for T1: Rs. 53000; T2: Rs. 56000 and final Rs. 58000 (Stoploss: 46000)
-Amit Pabari is managing director of CR Forex Advisors. The views expressed are personal.
-Click here to read more articles by the author
Disclaimer: The CNBCTV18.com editorial team does not engage in speculative or active trading in stock markets and follows its Code of Conduct on securities trading and investment. Any investor/ viewer is advised to carry out necessary diligence on their own or through a certified registered financial advisor for investment decisions.
Check out our in-depth Market Coverage, Business News & get real-time Stock Market Updates on CNBC-TV18. Also, Watch our channels CNBC-TV18, CNBC Awaaz and CNBC Bajar Live on-the-go!